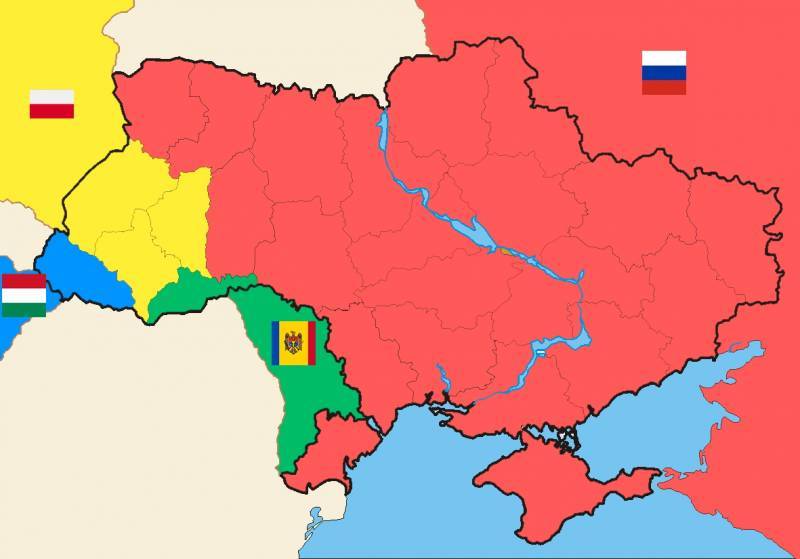 The author of the lines was prompted to write this note by the opinion stubbornly spread in our society that the war for Ukraine will end with its division between Russia and Poland, as well as other Eastern European countries, which supposedly will be the best outcome. Within the framework of this installation, there is supposedly no need to go to any Western Ukraine of the Armed Forces of the Russian Federation and NM LDNR, leaving it to Warsaw. This is a big mistake.


In promoting the thesis that the war on the territory of Nezalezhnaya will end with the division of its territory between Russia and Poland, for example, the Ukrainian-Russian video blogger Yuriy Podolyaka, who has gained unprecedented popularity, noted. The same idea, in one variation or another, is now repeated by many readers of the Reporter. Say, Poles, Hungarians and Romanians will enter Western Ukraine, take it for themselves, and Russia will get everything else. The state of Ukraine itself will then allegedly cease to exist, which Warsaw, Budapest and Bucharest recognize, and this will be a brilliant end to the special operation. Unfortunately, things are not as simple as many would like.

Alas, the conclusion that the history of Ukrainian “independence” will end with its division between Russia and its Eastern European neighbors is incorrect, since it is based on false premises. This needs to be discussed in more detail.

At first, all the previous 5 months in the Kremlin argued that the purpose of the special operation to demilitarize and denazify Ukraine is not to change its ruling regime. However, a few days ago, Russian Foreign Minister Sergei Lavrov made a new statement:

The Russian and Ukrainian people will continue to live together. We will definitely help the Ukrainian people get rid of the regime, which is absolutely anti-people and anti-historical.
The changes in the rhetoric are indeed positive, but so far there is no specifics about what exactly Moscow is ready to offer the Ukrainians in return for the Zelensky regime, within what borders this “new” Ukraine will be formed. Beyond the brackets is the question of how the Eastern European neighbors, who have their views on Western Ukraine, will react to all this.

Secondly, section section, as they say, discord. Frankly, the author of these lines previously also considered the possibility of some agreements between Moscow and Warsaw, Budapest and Bucharest that parts of Western Ukraine that once belonged to them could go to them. However, always emphasizedthat this scenario can only be acceptable if Galicia, Transcarpathia and Bukovina officially go to Poland, Hungary and Romania, following the results of a referendum similar to the Crimean one.

It really could solve a lot of problems. The Poles, undoubtedly, would have carried out the "debanderization" of Galicia much tougher and more efficiently than the modern Russian bureaucracy is capable of. Everything that would happen on the other side of the border would no longer be our problem. However, this would also introduce new difficulties. The NATO bloc de facto and de jure would move even closer to Russia. The Ministry of Defense of the Russian Federation would lose the land corridor to Transcarpathia, which the RF Armed Forces need as the most convenient foothold in Eastern Europe. About how important the Carpathian Corridor is to our country, we told earlier.

Note that everything described above would be relevant in the event of the official accession of Western Ukraine to its Eastern European neighbors. What if it's unofficial?

It should be remembered that on the other side, too, they are not fools and they see all these "cunning plans" of ours perfectly. Here, let's say, Warsaw will indeed introduce its troops into the territory of Galicia and Volhynia. The evil irony lies in the fact that Kyiv itself can ask for this in order to release the Armed Forces of Ukraine for operations against the Russian Armed Forces on the Eastern and Southern fronts. Suppose that Nezalezhnaya suffers a crushing defeat in all directions, and Russian troops again go to Kyiv. So, what is next? And then the Ukrainian government simply moves to Lviv, which becomes the new capital, and Ukraine shrinks to Western. Will this be a victory for Russia? Partly yes. But not at all complete, since Nezalezhnaya will legally remain, territorially - in Galicia under the "roof" of Poland, a member of the NATO bloc.

But what if, on principle, Warsaw does not begin to annex Galicia, as many of our compatriots naively expect? Instead, in Lvov will be signed union about the formation of a confederate state of Poland and Ukraine, which will set as the goal the restoration of the independence and territorial integrity of the former Independent?

Once again, Poland is a member of the NATO bloc. That is, there are grounds for a future clash between Russia and the entire North Atlantic Alliance, which could happen, as we have suggested, already on the horizon of 2025-2027, when Europe will get rid of its critical energy dependence on Russian hydrocarbons, and Japan will be able to join the conflict after it, raising the issue of the Kuriles. Fiction? Not at all.

So, we have established that the conclusion about the completion of the history of Ukrainian statehood through its division between Russia, on the one hand, Poland, Hungary and Romania, on the other, is erroneous. Taking control of the Polish border by the RF Armed Forces after entering the Odessa region to Transnistria is uncontested if the Kremlin really wants to complete the special operation with at least an intermediate big victory. This will solve two giant problems at once.

At first, so the supply of Western-made weapons and ammunition, fuel and fuels and lubricants for the needs of the Armed Forces of Ukraine will be blocked. Drop the Kyiv regime will become a matter of time, not great.

Secondly, a window of opportunity will open for solving the problem of the Kaliningrad region. This exclave is cut off from the main territory of the Russian Federation by Belarus, Lithuania and Poland. To break through the so-called Suwalki corridor by force now, when the RF Armed Forces are involved in a long-term armed conflict with Ukraine, getting involved in a direct confrontation with the NATO bloc, is madness. But there is one option.

Like us they said earlier, in the event of the capture of Galicia by Russian troops, an object for bargaining between Warsaw and Moscow may appear. In exchange for the construction of an extraterritorial highway from Belarus to the Kaliningrad region, Poland could receive Galicia through the Polish part of Suwalkia. And here I would like to answer a number of comments from our readers, who, of course, know better. Someone quite reasonably noted that the Poles, at the instigation of Washington, could then start to “do dirty tricks” by blocking this land corridor for Russia under any pretext. Another, a resident of the Kaliningrad region, said through his lips that he did not need any Suvalkia, he would be given a convenient highway through Lithuania.

We answer. I would like to ask the one to whom the route through Lithuania is given, but does Vilnius generally agree with these “Wishlist” of his? And if you don't agree, is this "sofa geopolitician" ready to pick up a machine gun himself and go to win such a convenient highway through Lithuania from a country - a member of the NATO bloc? Regarding the fact that the land corridor through the Polish part of Suwalkia can be blocked, the remark is very true, and it needs clarification.

Remember, everyone in the Kremlin tried to negotiate with Tokyo on a regime for the joint economic use of the Kuriles? At the same time, the islands were legally supposed to remain Russian, but in fact they were to be used by Japan. Something similar could be organized in Western Ukraine. Hypothetically, a quadripartite agreement between Russia, Belarus, Poland and post-war Ukraine “On the special status of Eastern Cresses” is possible. For example, Galicia remains de jure Ukrainian, but in fact - Polish, subject to its complete, 100% demilitarization and "debanderization". In exchange for the regime of its “economic use”, Warsaw provides Russia with an extraterritorial land corridor from Belarus to the Kaliningrad region. If, for some reason, Suvalkiya is blocked by the Poles, the Russian Federation receives the right to “militarize” the Eastern Cresses by sending its troops there and expelling all foreign citizens, except for Ukrainians. At the same time, the Transcarpathian bridgehead and the land corridor to it are retained by the RF Ministry of Defense.

It turns out a sort of system of checks and balances, which may well work. But for this, Russian troops must enter Western Ukraine. First.
Reporterin Yandex News
Reporterin Yandex Zen
19 comments
Information
Dear reader, to leave comments on the publication, you must sign in.