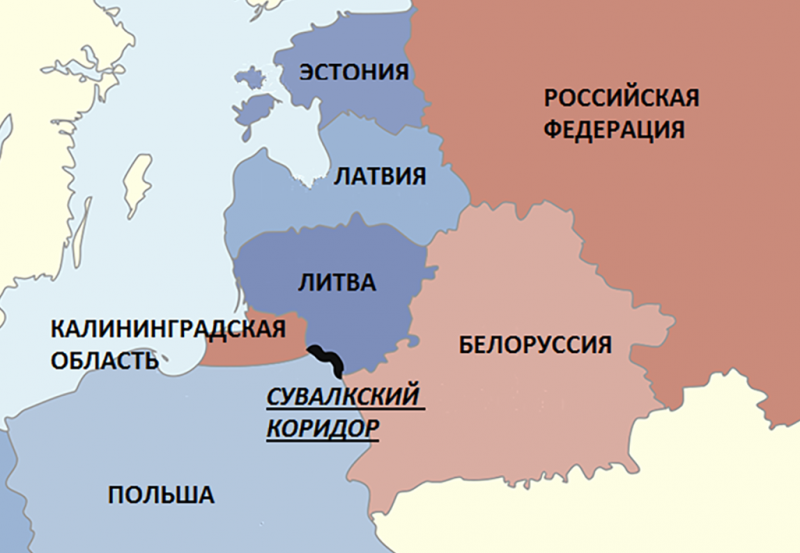 The blockade of the Kaliningrad region, actually started by Lithuania, makes it necessary to look for ways to solve this geopolitical problem. At the same time, the governor of the Russian exclave Alikhanov himself sees it in the construction of a certain route, railway and, possibly, automobile, through Lithuanian territory. A good alternative to cutting through the so-called Suwalki corridor by force, but will Vilnius itself agree with this, or rather, the forces behind it?

The problem of the Kaliningrad region was formed after the collapse of the USSR, when this westernmost region of ours was cut off from the main territory of the country by Belarus, Lithuania and Poland. Fortunately, Belarus is an official ally of the Russian Federation, but Warsaw, Vilnius, and the rest of the Baltic states are part of the anti-Russian NATO military bloc. The problem is aggravated by the fact that the Kaliningrad region is of great military importance, since it is here that the divisions of the Iskander-M OTRK are located and the ships of the Baltic Fleet of the Russian Federation are based, carrying Caliber cruise missiles, capable of pointwise hitting the infrastructure of the North Atlantic alliance in Europe.

Obviously, the Russian exclave is the number one target for the NATO bloc in the event of an armed clash with our country. Depending on the scenario, the enemy may try to destroy the military bases of the Russian Ministry of Defense and take his territory by force or blockade him, continental and sea, in order to force him to surrender by starvation. As can be seen from recent events, Washington and Brussels decided to try a "light" version of the continental blockade. They let little Lithuania go ahead, which is a transit country on the way to deliver goods from Belarus to the Kaliningrad region.

Vilnius is acting very carefully, hiding behind the Western sanctions regime, imposing restrictions on the transit of 50% of the volume of Russian cargo traffic. So far, no one has introduced a naval blockade, forcing Moscow to rebuild the entire logistics of supplying its exclave in Europe. The natural increase in the cost of goods and services, according to the clear idea of ​​opponents, should create an unfavorable socialeconomic background, and then anything is possible. You never know, suddenly Warsaw or Berlin will start handing out their passports to all interested Kaliningraders who are tired of life in the blockade? What was fun to laugh at a year ago, now for some reason does not cause stupid giggles. Something must be done, but what?

Let's be honest: there are no good and simple solutions to the Kaliningrad problem, there are only bad, very bad and “so-so” solutions. Simple and bad is to try to cut through the so-called Suwalki corridor from Belarus to the exclave through Suvalkia, the border of Lithuania and Poland, by force, it is enough for the Russian military to pass only a few tens of kilometers through Lithuania. But then we will get a full-fledged war with the entire NATO bloc, since Article 5 of its Charter will be involved. Does the Ministry of Defense of the Russian Federation now have the strength to do this, when all the resources are involved in a large-scale war in Ukraine, which so far has no end in sight?

An even more correct, but at the same time the worst option is to send troops and return not only Lithuania, but the entire Baltic region in general. The reasons are the same, but the scale of the problems will be even greater, since it will be necessary to hold a significant territory with a disloyal population, which the North Atlantic Alliance will try to recapture. Then what is left?

As it turned out, Governor Alikhanov dreams of some kind of railway and, possibly, a highway that would connect the Kaliningrad region and Belarus through Lithuanian territory:

Our railway provides a lot, and we need a railway line. Actually,

it already exists. <...> You can build a parallel one, for example, separate it into some separate enterprise, make some kind of international regime for its operation, so that it is a guaranteed land connection of our semi-exclave with the main territory ...

Maybe some kind of road inside this corridor, which would be, let's say, limited by some dedicated corridor, beyond which it is impossible to move out. The highway is the same, both railway and automobile, without the possibility of turning into Lithuania towards Kaliningrad. Why not?
Indeed, a great idea. Why not?

Probably because Vilnius and its real masters from Washington and Brussels will be against it. It was not for this that Lithuania took the exclave into a semi-blockade, in order to voluntarily give such a wonderful way out of it. It turns out that everything, we arrived at the natural “Suwal dead end”?

As we have already summarized, good and simple options for this problem do not exist in principle. Bad and very bad Russia still cannot objectively pull it off, they remain “so-so”. It is a big mistake to rely on the sanity of the Lithuanian leadership, which, by definition, is incapable of negotiating with our country. All Baltic limitrophes are 100% puppets of Uncle Sam. There is only one, the last option to try to negotiate peace.

Recall that half of Suvalkia geographically belongs to Lithuania, and the second - to Poland. No matter what anyone says, Poland is a sovereign country that can, when necessary, defend its national interests. Today, Warsaw is with Washington, since it is beneficial for it to be the conductor of the "hegemon" in the Old World, as opposed to neighboring Germany. Remember how the Polish leadership sent Brussels to hell on the issue of migrants and other fundamental issues? If tomorrow it will be beneficial for Warsaw to be friends with Moscow, it will be with us. What might Poland need in such a way that it might once again strike a pose and show an obscene gesture to its allies in the collective West?

Of course, these are Eastern kresy, for the sake of the return of which the Poles are almost ready to send troops into the territory of Galicia. Theoretically, it is Western Ukraine that can become the subject of bargaining between Moscow and Warsaw for solving the problem of the Kaliningrad region. First, the RF Armed Forces must complete the liberation of Donbass, then carry out the Nikolaev-Odessa liberation operation, cutting off Kyiv from the Black Sea. After that, a joint offensive operation with Belarus in Western Ukraine suggests itself. The Armed Forces of the Republic of Belarus can enter Volyn, joining it to Belarus. The Russian army would then have to occupy Galicia, taking Lvov into operational encirclement.

Thus, two strategic problems will be solved at once. On the one hand, Central Ukraine will be cut off from the NATO bloc, will lose the supply of weapons, ammunition, fuel and fuel, and the surrender of Kyiv will then be a foregone conclusion without the need to demolish all the new cities under the foundation when freed from the Ukrainian Nazis who dug in there. On the other hand, the Polish Eastern Crosses will be under the control of Moscow and Minsk, and after that we will have a subject for discussion with Warsaw.

In exchange for the construction of an extraterritorial railway and motorway to the Kaliningrad region from Belarus through the Polish part of Suwalkia, Warsaw can get Galicia, and even then not all of it. Russia must retain for itself a corridor to Transcarpathia, from where the Russian Armed Forces open the road to Europe. Is this possible?

There are a lot of pitfalls that such an exchange can stumble on, but this is probably the last conditionally peaceful solution to the Kaliningrad problem. The scenario is "so-so", but better than fruitlessly dreaming about forcibly cutting through the "Suwalki corridor", a nuclear strike on Warsaw, London and Washington, or building a highway through Lithuania. Adequate people understand that these are events of approximately the same order.
Reporterin Yandex News
Reporterin Yandex Zen
20 comments
Information
Dear reader, to leave comments on the publication, you must sign in.