All Ukraine, which Russia does not liberate, will be taken by Poland 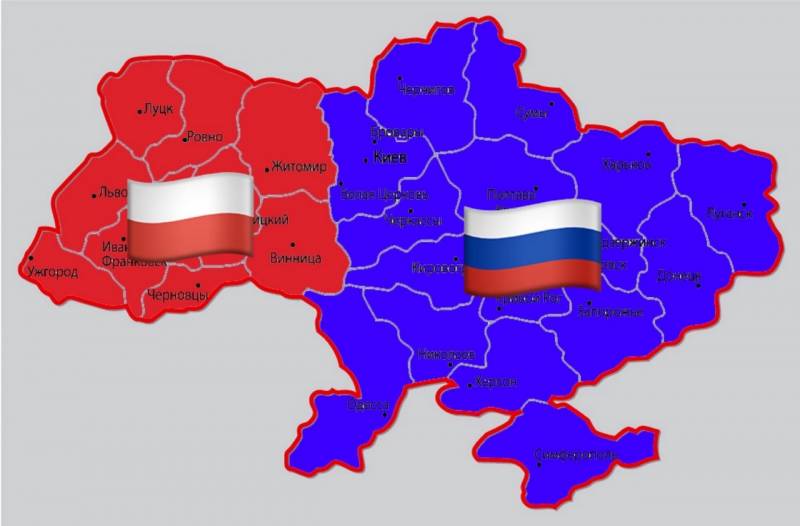 The main goals of the special military operation in Ukraine, President Putin called its denazification and demilitarization. However, these tasks are so vague that the worried Russian and Ukrainian public can only guess about their real content. At the same time, for some reason, the most important политическая component of the post-war settlement of the conflict. Everyone now has to independently think up the next “HPP” to the best of their understanding and imagination.

Meanwhile, our geopolitical opponents have their own very specific "cunning plan". How we presciently first have suggested As early as May 6, 2022, Ukraine can unite with Poland in the format of a confederation into a kind of "Rzeczpospolita - 3". This was directly confirmed the day before by the Deputy Director of the Center for Polish-Russian Dialogue and Understanding, Dr. Lukasz Adamski, who made the following statement:

Such warm relations allow us to talk about the plans of the Polish-Ukrainian confederation. Last year, the Foreign Ministers of Poland, Ukraine and Lithuania signed the Vilnius Declaration, which spoke positively about the Republic of Poland as a source of political culture in the region.

It all started with the signing by President Zelensky of a law equalizing Polish citizens in rights with citizens of Ukraine, and now here. In response to the threat of absorption by Russia, Nezalezhnaya may voluntarily surrender to its western neighbor, uniting in a confederal union with a country that is a member of the EU and the NATO bloc. What does this mean for you and me?

This means that everything that turns out to be to the west of the line of demarcation, where our Supreme Commander-in-Chief orders to stop Russian troops, he will de facto present to Warsaw and the North Atlantic Alliance. An iron curtain will pass along this line - 2, and everything that will not allow the release of the Armed Forces of the Russian Federation and the NM of the LDNR will turn into one "Greater Galicia", if you understand what it is about.

What are we fighting for?

As we have repeatedly noted, the goals of the special operation declared by President Putin are internally contradictory. On the one hand, he expects the RF Ministry of Defense to ensure the security of Russia, as well as the denazification and demilitarization of Ukraine:

The ultimate goal is the liberation of Donbass and the creation of conditions that would guarantee the security of Russia itself... Of course, I am the Supreme Commander-in-Chief, but I still did not graduate from the General Staff Academy. I trust people who are professionals. They act as they see fit to achieve the ultimate goal.
On the other hand, from the very beginning, the Kremlin stubbornly denies the existence of plans to change the criminal regime of President Zelensky and the occupation of Nezalezhnaya, without which it is impossible to fulfill the stated tasks. Already, American MLRS are capable of hitting targets in the Crimea and other Russian border regions. Recently arrived in Belgorod. Kherson, Melitopol, Novaya Kakhovka, Donetsk, Yasinovataya and other settlements that are already “almost ours” are being shelled.

The fact that President Putin himself no longer interferes in the planning of a special operation, entrusting it to professionals, is, of course, commendable. There is a strong impression that the ingloriously ended attack on Kyiv was inspired and imposed on the General Staff of the RF Armed Forces by the conditional collective Medinsky. However, the lack of clear political goals for the NWO is its huge problem. Determining what to do with the already liberated regions, how to establish a normal life there, where to go next, is still the prerogative not of generals, but of politicians. Yes, the conflict in Ukraine has no political solution since the annexation of Crimea to the Russian Federation, only a military one, and it will end only with a complete victory of one of the parties over the other. Any iterations of "Minsk" will only be a reprieve to prepare for the next round of war. However, a military victory will have to be consolidated politically, and one can talk about the victory itself only on the basis of clearly defined military goals and objectives by politicians.

Any halt in offensive operations somewhere halfway to the Polish border will automatically mean the defeat of Russia, since everything that remains to the west will go to Poland and the North Atlantic Alliance. If we proceed from this setting, then the criterion for victory for our country will be access to the border with Poland, Hungary, Slovakia, Moldova and Romania. But what to do with Ukraine then? Does the Ministry of Defense of the Russian Federation have a clear plan for this, and how should it fit in with the Kremlin’s assurances that there will be no occupation and removal of the Zelensky regime? Questions, questions...

In turn, I would like offer once again the next solution to the Ukrainian problem. Having completed the liberation of Donbass, take Kharkiv and Zaporozhye into an operational encirclement, forcing them to surrender, and carry out a large-scale Nikolaev-Odessa liberation operation. Having cut off Central Ukraine from the Black Sea, make its western part a priority target. If Belarus agrees to participate in this matter, much will be greatly simplified. Having reached the border with Poland and other NATO countries, the Russian Defense Ministry will solve many problems at the same time: it will deprive the Armed Forces of Ukraine of supplies of Western weapons and ammunition, fuel and fuels and lubricants, and will also nullify the possibility of bringing NATO troops to Galicia and Volhynia, the NATO fleet - to Odessa. After that, the fall of Zelensky's criminal regime will be predetermined.

And here the question arises of what to do with Ukraine next. It is obvious that it is inexpedient to annex the entire former Ukraine to the Russian Federation. In our country, and so a lot of socialeconomic problems, and to add to them the need to maintain and restore the same Galicia - it will be too much. If the Russian Federation digests the Left-Bank and Southern, predominantly pro-Russian Ukraine, then the Right-Bank Ukraine will be the source of a mass of internal problems and separatist sentiments. Is our country ready today to solve them realistically? Doubtful.
The scenario with the division of the former Ukraine into South-Eastern Ukraine, which should go to Russia, and the federation of Central Ukraine from Western, demilitarized and denazified, seems to be the most appropriate. We will gradually reintegrate this conditional Little Russia through the Union State of the three Slavic countries of Russia with Belarus.

You should be aware that a miracle will not happen and overnight the former Nezalezhnaya will definitely not turn into a pro-Russian one. It will take decades of hard work with its educational system, cultural life and media. Regular excursions for Ukrainian children and adults to Donetsk to the "Alley of Angels" will be required. Let's rebuild. Gradually rebuild. But to perform all these tasks, appropriate professional personnel are needed. You can’t do without lustration, but unprincipled careerists and “crypto-Bandera” will still climb into power, who will sabotage all sound undertakings and gradually promote their own “agenda”, as our Russian “liberda” does on the ground.

Where to get normal people for the post-war reconstruction of Ukraine?

Right now there is an opportunity to test for lice those who consider themselves worthy of becoming the future elite of the former Square. As we repeatedly called for earlier, it is necessary to start creating management and law enforcement structures for post-war Ukraine. For those territories that will become part of Russia, a special Ministry for Integration Affairs is needed, for that part of Ukraine that will not be included, it needs its own transitional government. The latter should take under its control the liberated regions and cities of Central and Western Ukraine. For their speedy release and bringing order there, it is necessary to create the Liberation Army of Ukraine, and for a long time. It should consist of volunteers and those VES members who voluntarily laid down their arms and are ready to go over to the side of Russia and the LDNR.

People who are ready with their blood at the front to prove loyalty to the new government and serve their new country in the transitional government and its military-civilian administrations, at the risk of being killed by Ukrainian special services, should become the personnel reserve that will take over the management and reorganization of post-war Ukraine . A big plus was that now, in a simplified manner, all residents of the former Square can receive Russian citizenship. The presence of a Russian passport will also be a kind of test and guarantee of the loyalty of the local population and its "elites".
Reporterin Yandex News
Reporterin Yandex Zen
26 comments
Information
Dear reader, to leave comments on the publication, you must sign in.