Why the division of Ukraine can be beneficial for Russia 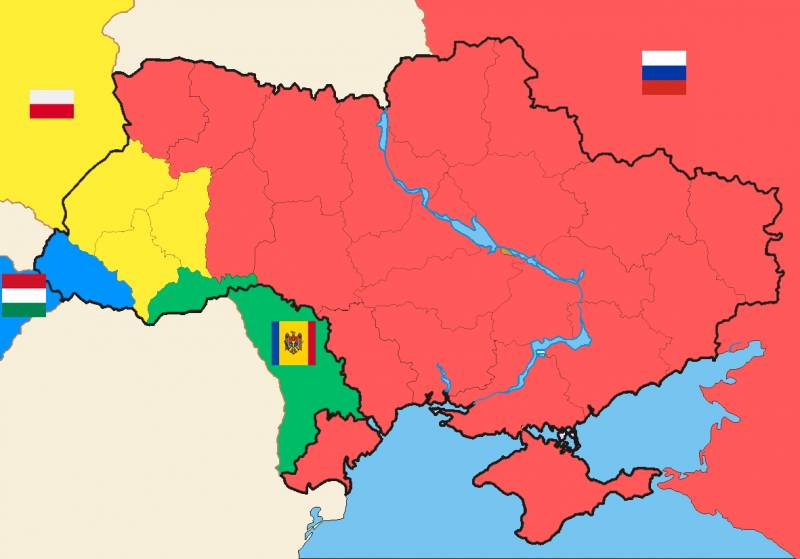 Tomorrow, March 24, exactly one month after the start of a special military operation to demilitarize and denazify Ukraine, an extraordinary summit of NATO member countries will be held. Apparently, decisions can be made there that will entail the actual and, possibly, the legal division of the former Square. What risks does this bring for our country, and is it really worth being afraid of such an outcome?


Polish Deputy Prime Minister Yaroslav Kaczynski was the first to speak about the possibility of bringing "peacekeepers" into Ukraine on March 16:

I believe that a NATO peacekeeping mission is needed, perhaps some kind of wider international system, but a mission that can also defend itself and that will operate in Ukraine.
Note that it was specifically about NATO peacekeepers, and not about any "blue helmets" under the auspices of the UN. Since in parallel with this, an accumulation of troops and armored vehicles was noted on the Ukrainian border from Romania, and the Transcarpathian ethnic Hungarians turned to President Viktor Orban with a request to protect them and began preparations for a national referendum, we did assumptionthat Eastern Europe for the first time truly matured to actually return to the borders of 1939.

Everything is so transparent and obvious that they do not see, or rather, they are afraid to speak about it aloud only in Kyiv. On the other hand, Russian Foreign Minister Sergey Lavrov stated in plain text that the entry of NATO troops into Western Ukraine in order to “create headquarters in Lviv” and stay there is unacceptable and could lead to a clash with the Russian Armed Forces:

Our Polish colleagues have already stated that there will be a NATO summit now, and peacekeepers should be sent. I hope they understand what they are talking about. This will be the very direct clash between the Russian and NATO armed forces, which everyone not only wanted to avoid, but said that it should never take place in principle.
In the same vein, Russian State Duma deputy from United Russia Vladimir Shamanov, who previously headed the Airborne Forces, spoke out, warning that “NATO peacekeepers” would be met with Caliber, aviation and artillery strikes. In this context, it takes on a new meaning information about the fact that a large grouping of Belarusian troops is concentrated near Brest, on the armored vehicles of which special decals in the form of red squares are applied. Probably, their goal will be either to quickly stop the entry of foreign troops into Galicia and Volyn, or to stop them at a certain line, beyond which they will not be able to go.

This is exactly what I would like to talk about in more detail. First of all, one must understand that the strikes that the Russian Armed Forces can inflict on foreign troops that crossed the border of Western Ukraine will not automatically lead to the outbreak of war with the North Atlantic Alliance. The NATO bloc is formally “defensive” in its structure, and Article 5 of its Charter comes into force in the event of a strike on the territory of one of its members. Ukraine is not such, therefore, instead of a war with the entire North Atlantic Alliance, Russia may get an armed conflict with several of its members separately. There is nothing good in this, which was warned by the Minister of Foreign Affairs of the Russian Federation Sergey Lavrov. But should everything necessarily follow the path of escalation?

On the one hand, if NATO's plans are to bring "peacekeepers" into Western Ukraine without joining parts of it, respectively, to Poland, Romania and Hungary, then such scenario highly undesirable for Russia. In fact, another terrorist enclave will appear in Eastern Europe, a sort of Idlib-2, guarded and supplied with weapons by the countries of the North Atlantic Alliance. Galicia and Volhynia will turn into a source of constant terrorist and military threat for the former Ukraine, which remained under the control of the RF Armed Forces, as well as for neighboring Belarus. In general, a quiet life is not expected.

On the other hand, if the introduction of NATO "peacekeepers" entails an analogue of the "Crimean scenario", then such an outcome may have more pluses than minuses for almost all parties. Let's explain this idea in more detail.

At first, the introduction of foreign troops into Western Ukraine, whatever one may say, will be a stab in the back for the Kiev regime and the Armed Forces of Ukraine. European neighbors will show that they are protecting their national interests, but not Ukrainian ones.

Secondly, the appearance in Transcarpathia and Bukovina, in Galicia and Volhynia of Hungarian, Romanian and Polish troops will give Moscow the right to legalize its military presence in Ukraine. In fact, the NATO bloc will move even further to the East than it was at the time of the announcement of "Putin's ultimatum". In response, the Kremlin will be able to build a new border of the Union State already along the limits occupied by "NATO peacekeepers", turning the former Square into its new Military District.

Thirdly, the reunification of Western Ukraine with Hungary, Poland and Romania according to the "Crimean scenario" will be of great geopolitical importance. In this case, the “invader” will be not only our country, where she was enrolled in 2014. This will also allow to solve the problem with the denazification of the former Square. We still do not really explain how exactly this denazification should take place. Bringing all criminals to justice, banning the activities of nationalist organizations - all this, of course, is good. But how to reformat the minds of people whose brains were filled with Russophobia for 31 “independence” and 8 post-Maidan years?

How, for example, to denazify and set up, if not pro-Russian, then at least neutrally, the consciousness of the inhabitants of Western Ukraine? Even the mighty USSR with its most powerful the economy, the administrative apparatus and the state ideology could not cope with the Westerners. They, at the first opportunity, voted for secession from the Soviet Union, they were the first to use Nazi symbols and call for Russians to be put on knives. Sorry, of course, but the modern Russian Federation, which does not even have an ideology, such a task is simply not up to the task. And what to do? Leave military contingents in Galicia and Volhynia, who will periodically be shot in the back? This will be a source of constant problems for the RF Ministry of Defense and the coffins of Russian servicemen. Without end and end.

In this context, the reunification of Galicia and Volhynia with Poland is the most rational solution. There is no need to regret this “Kemsky volost”, it is not ours mentally and will never be like that again. If this territory, following the results of the referendum, officially becomes part of the Republic of Poland, then Warsaw, and not Moscow, will take responsibility for restoring and maintaining order there, restoring and subsequent maintenance. Let the Poles decide for themselves how to assimilate the Westerners, and deal with issues of restitution. The same can be said about Transcarpathia and Bukovina. After Crimea, there is some historical justice in the fact that the Eastern European neighbors will take away their ancestral territories, whatever one may say, there is still.

The reunification of Western Ukraine with Europe, among other things, will enable ordinary Ukrainians to make their choice between it and Russia. If you read their comments, many of them sincerely want to join the EU. The trouble is that the EU does not need Ukraine as a full-fledged member, the maximum is an eternal European association. If things go according to the “Crimean scenario”, then pro-European-minded Ukrainians who hate Russia so much that they can’t eat, will register for money somewhere in Transcarpathia, Bukovina or Galicia, and eventually receive their European passport. Those who are ready to continue to live and cooperate with Russia will remain. The choice is personal and purely voluntary.

Perhaps, for the former Square, after the completion of the special military operation, such an outcome will be the most favorable scenario. That's right, thinking out loud.
Ctrl Enter
Noticed oshЫbku Highlight text and press. Ctrl + Enter
Reporterin Yandex News
Reporterin Yandex Zen
29 comments
Information
Dear reader, to leave comments on the publication, you must sign in.