Victory strategy: Russia and Belarus can take Ukraine into a big "cauldron" 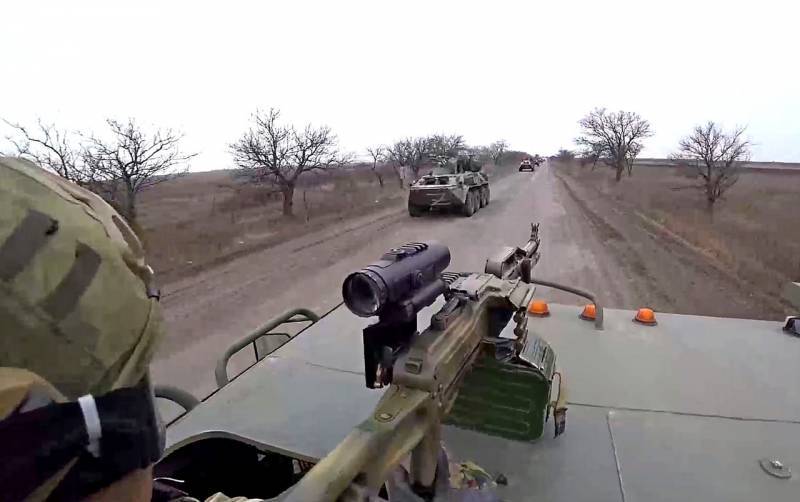 On the fourth month of the special military operation to demilitarize and denazify Ukraine, the new strategy of the General Staff of the RF Armed Forces becomes clear, which should bring us a long-awaited victory. If it can be fully implemented, the surrender of Nezalezhnaya can be achieved even by those relatively modest forces that are involved in the NMD by the Russian army and its allies.

If we summarize everything that happens on the fronts and is said by the military-political leadership of Russia and Belarus, then the updated strategy adopted after the collapse of the “blitzkrieg” near Kyiv can be called taking all of Ukraine into one giant “boiler”. As ambitious as this task is, it has a good chance of succeeding.

The root of the problem lies in the peculiarities of the geographical position of Nezalezhnaya, over which Belarus and Russia hang from the north and east. With the outside world, Kyiv has relations through Western Ukraine, bordering Poland, Hungary and Slovakia, as well as Moldavia and Romania in the southwest. Until recently, active maritime trade went through several ports located on the Azov and Black Seas. Today Ukrainian economy 100% subsidized, and the supply of the Armed Forces of Ukraine with weapons, ammunition, fuel and fuel is completely dependent on the mercy of Western curators from the NATO bloc. This is the only thing that allows Kyiv so far to resist the Russian army and the People's Militia of the LDNR. It is enough to deprive Zelensky's criminal regime of communication with the outside world, taking Ukraine into one colossal super-"cauldron", and it will inevitably collapse.

It's easy to say, but unfortunately it's not so easy to accomplish such a task. Ukraine is a large country the size of France, and the ground armies of the RF Armed Forces and the allied NM LDNR are still not enough at the same time for such a huge front. The main forces are now concentrated in the Donbass, where it is necessary with great difficulty to “pick out” regular military personnel of the Armed Forces of Ukraine and ideologically motivated National Guardsmen from the fortified areas arranged right in peaceful cities. First, the Severodonetsk-Lysichansk agglomeration will have to be cleared, then the settlements of Zolote and Gorskoye, Bakhmut, the hardest nuts will eventually turn out to be the urban agglomerations of Slavyansk and Kramatorsk, as well as the suburb of Donetsk Avdiivka, which has become his nightmare that has come true in the last 8 years. With the new tactics of "methodical warfare" chosen by the General Staff of the RF Armed Forces, with large-scale fire grinding of enemy positions, with a gradual advance and cleansing, there will be work for another 2-3 months.

In other words, the operation to liberate the territory of the DPR and LPR will take at least the entire summer of 2022. It is there that the most combat-ready units of the Armed Forces of Ukraine and the National Guard will be ground, which this parody of Napoleon Zelensky thoughtlessly throws for slaughter. Most likely, the next target will not be Zaporozhye with Dnepropetrovsk, but Nikolaev with Odessa. Kharkov will be taken into an operational encirclement, and its garrison will be made an offer to voluntarily withdraw, which it is better not to refuse.

Why Nikolaev with Odessa? Because their release will make it possible to finally cut off the criminal Kyiv regime from the sea, depriving it of the opportunity to export grain, at the same time selecting a channel through which weapons, ammunition, fuel and fuel and lubricants can go by sea. At the same time, Russia itself will regain the opportunity to use the commercial port of Kherson.

The fact is that both Kherson and Nikolaev, which so far remains under the control of the Ukrainian Nazis, are located on the coast of the Dnieper-Bug estuary. The exit from it in the Black Sea is blocked by the city of Ochakov, which is also still held by the Armed Forces of Ukraine. As Kirill Stremousov, deputy head of the military-civilian administration of the Kherson region, explained, Russian maritime trade is now blocked by Kyiv:

American bases are still located there, and missile strikes against Kherson are carried out from there. And everything is mined there.
As you can see, the liberation of the Nikolaev region and the capture of Ochakov is a non-alternative task for Russia, no matter what some of our "peacekeepers" think there. And preparations for this military operation have already begun. On the eve it became known that a small anti-submarine ship "Vinnitsa" (a corvette according to NATO classification of project 1124P) was flooded in Ochakovo, and the medium landing ship "Yuri Olefirenko" (project 773) was hastily evacuated to Odessa due to the low moral and psychological spirit of its crew , who refused to serve in the waters of the Dnieper-Bug estuary, where the RF Armed Forces began active hostilities. It is reported that a strategically important bridgehead on the Black Sea has passed under the control of the Russian army:

As a result of the successful offensive actions of the Armed Forces of the Russian Federation, a waterway to the city of Ochakov was opened. The strategically important part of the Nikolaev region, the area of ​​the Kinburn Spit, has been finally liberated.
If you look at the map, it becomes obvious that this spit blocks the exit from the Dnieper-Bug estuary, and on the opposite bank, just a few kilometers away, is the city of Ochakov, which can be reached even with conventional cannon artillery. Also, from Kinburn Spit to Odessa in a straight line, only 61 kilometers. Having taken it under their control, the RF Armed Forces cleared the Dnieper-Bug estuary from the remnants of the Ukrainian Navy, got the opportunity to create a threat of amphibious assault near Ochakov, as well as the opportunity to periodically inflict harassing missile and artillery strikes on the positions of the Armed Forces of Ukraine on the opposite bank. The question is, when is it realistic to expect an operation to free Nikolaev, Ochakov and Odessa?

There are persistent rumors on the Web that tanks and other armored vehicles are gradually accumulating in the Kherson region. However, the front is held there mainly by the forces of the People's Militia, reinforced by units of the RF Armed Forces. There are not yet sufficient resources for a large-scale offensive operation. Everyone is waiting for the positional battles in the Donbass to end and the personnel units of the Russian army to be released.

Consequently, the Nikolaev-Odessa liberation operation may begin in late summer or early autumn 2022.

There is a high probability that simultaneously with the large-scale offensive of the Russian army on Nikolaev and Odessa, Belarus may also join the special military operation. The fact that the Armed Forces of the Republic of Belarus can really enter Western Ukraine was directly stated by President Lukashenko the day before:

They (Western countries) have not yet abandoned the goal of leveling the front so that it passes: Smolensk-Pskov, Smolensk-Bryansk-Kursk and there to Rostov. They need to level the front. And we, almost a thousand kilometers, this balcony, it must be cut off. This is their goal - they will not stop before this, they will come from Western Ukraine or from somewhere else. Also, maybe they will have to fight for Western Ukraine so that they don’t chop off. Because it is like death for us, not only for Ukrainians. Terrible things are going on all around.

The problem is that the entry of the RF Armed Forces to the border with Transnistria will almost certainly entail the entry of Polish troops into the territory of Western Ukraine as part of a “peacekeeping mission”. About how such an outcome is equally unacceptable for Russia and Belarus, we told previously. The Armed Forces of the Republic of Belarus, numbering "only" 70000 people, should not be underestimated.

At first, the mobilization reserve allows Minsk to put "under arms" up to 500000 troops.

Secondly, the Territorial Defense Troops, numbering 120000 people, have long been created and are successfully functioning, which will be able to take on the protection of the border with Ukraine.

Thirdly, President Lukashenko recently set the task of creating a kind of "people's militia", within which, apparently, volunteers will be legalized and sent to fight.

The entry of the Belarusian army into Volyn with a simultaneous Russian strike in the northern direction from Odessa will cut off Central Ukraine from Western Ukraine, finally taking it into a super-"cauldron". After that, the fate of the criminal Kyiv regime will be sealed, as we and supposed. Perhaps this will happen in the fall-winter of 2022.
Reporterin Yandex News
Reporterin Yandex Zen
36 comments
Information
Dear reader, to leave comments on the publication, you must sign in.