Will the Pantsir-S1 ZRPK be able to protect Russian cities 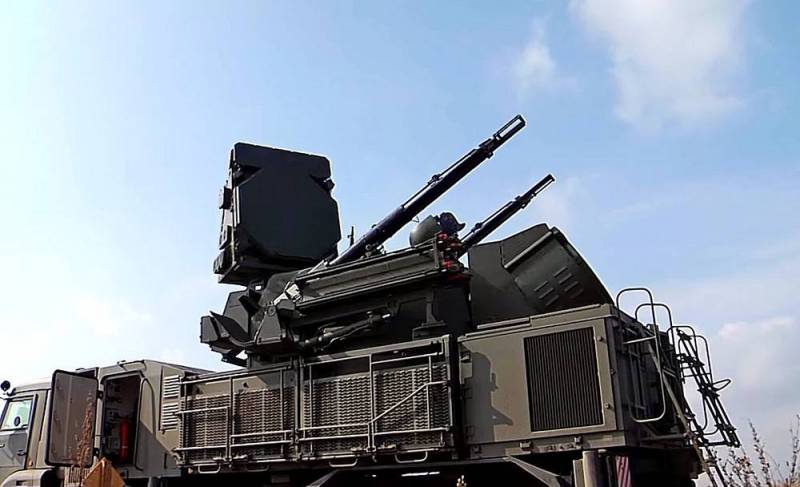 The last few days on the roofs of Moscow administrative buildings, like mushrooms after rain, the Pantsir-S1 air defense missile system began to appear. The reason for placing them over the heads of Russian officials is not difficult to guess: the Kyiv regime reports that it now has attack drones with a flight range of over 1000 kilometers in its hands. Is it possible to repeat the tragedy of Dnepropetrovsk, when a missile shot down by an air defense system fell on a residential multi-storey building, and what should be done to avoid it?

"Shell" on the roof

Anti-aircraft missile and gun air defense system "Pantsir-S1" first was seen on the roof of an administrative building in Teterinsky Lane in Moscow, then on the buildings of the RF Ministry of Defense on Frunzenskaya Embankment and the Main Directorate of the Ministry of Internal Affairs on Petrovka, 38. If you look at the map of the capital from above, it becomes clear that the radii of destruction of all three air defense systems intersect above the Kremlin, covering it . Also, "Shells" appeared near the dacha of President Putin in Valdai, in the area of ​​​​the compact habitation of the Russian "elite" on Rublevka, not far from the airfield of the Ministry of Emergency Situations Ostafyevo and the airport "Gazprom-Avia" in Shcherbinka.

Why this happens is quite obvious. Mikhail Podolyak, adviser to the head of the office of the President of Ukraine, said today that the Armed Forces of Ukraine will continue to hit our rear:

Escalation within Russia is inevitable. Including pampered and lazy cities, such as Moscow, St. Petersburg, Yekaterinburg, will be under attack.
Recall that with an active Western militarytechnical assistance, the Ukrainian military has already quite successfully brought obsolete Soviet-made Tu-141 UAVs to the airfield based on the Long-Range Aviation of the Russian Aerospace Forces three times, located deep in the rear in the city of Engels. "Swifts" stuffed with explosives flew by, led by NATO satellites, almost 700 kilometers above Russian territory. For some According to, instead of the old Soviet drones, the Armed Forces of Ukraine will now be able to use modern Sokol UAVs capable of flying, depending on the engine used, from 1000 to 3300 kilometers.

For the Kyiv regime, the minimum program is to show that Ukraine can carry out its own "retaliation strikes." The priority targets of the Armed Forces of Ukraine will be administrative buildings, military and critical infrastructure facilities. The maximum program may consist in the destruction by a kamikaze drone strike of someone from the country's leadership, which is very compactly concentrated, apparently, in Moscow. And all this puts on the agenda a number of serious problems that require prompt solutions.

First of all, this is an air defense system over the Russian cities that the Kyiv regime has set its sights on: Moscow, St. Petersburg and Yekaterinburg, as well as the border Belgorod, Kursk, Bryansk and "restless" Donetsk.

It is known for certain that a truly powerful layered air defense / missile defense system A-135 "Amur" has been deployed since Soviet times only over Moscow. It was created in accordance with the Treaty on the Limitation of ABM Systems between the US and the USSR of 1972 and is intended "to repel a limited nuclear strike on the Soviet capital and the central industrial region." The Amur system was developed to destroy warheads of enemy intercontinental ballistic missiles flying at a speed of 6-7 km / s, anti-missiles with nuclear warheads, long-range anti-missiles at high altitudes outside the atmosphere and short-range anti-missiles in the atmosphere.

We have no doubts about their effectiveness, but here's the thing: the A-135 is not designed to intercept low-flying low-speed small-sized targets, such as the Strizh or Sokol UAVs, but for completely different tasks. To use its anti-missiles to destroy Ukrainian drones is, to put it mildly, inappropriate. It turns out that covering up such a gigantic city as Moscow from a massive raid of “kamikaze” drones is far from a trivial task. The hasty actions of the Ministry of Defense of the Russian Federation, which began to place the Pantsir-S1 air defense missile systems on the roofs of administrative buildings, speak volumes in themselves.

And what to do in other cities - St. Petersburg, Yekaterinburg, Kursk, Bryansk or Belgorod? You can’t get enough of all the “Shells” with trained crews, they still need to fight. Again, the question arises of the safety of placing a 30-ton combat vehicle on the roof. We believe in the conscientiousness of Soviet builders, but still. But what if the integrity of the structure is violated according to the law of meanness at the most inopportune moment? And there is an even more embarrassing question. And where will the Ukrainian drones shot down by the "Shells" stuffed with a powerful explosive charge fall? ZRPK belong to a small radius of action, and around the center of Moscow.

It turns out that the placement of "Shells" on the roofs of administrative buildings is definitely not a panacea. There are a number of considerations in this regard.

At first, it is necessary to create a network of balloons or even AWACS airships along the Ukrainian border and on approach to large Russian cities, hanging appropriate radar equipment on them. This will allow you to see in advance the UAV released by the enemy and shoot it down with air defense or aircraft, preventing it from reaching the target. How this can be done, we told earlier.

Secondly, it is worth thinking about a certain decentralization of the power system, which is all concentrated in Moscow. As we already celebrated, there is a non-zero probability of inflicting a "decapitating blow" by the opponent. Therefore, in order to ensure national security, the administrative circuit should be duplicated, moving it somewhere far away from Ukraine, say, to Novosibirsk. God saves man, who save himself.

But in general, this whole situation once again confirms that as long as the Nazi pro-Western regime exists in Kyiv, there will be no rest for Russia.
Reporterin Yandex News
Reporterin Yandex Zen
11 comments
Information
Dear reader, to leave comments on the publication, you must sign in.