Will Ukraine be able to maintain its statehood if its territory is divided? 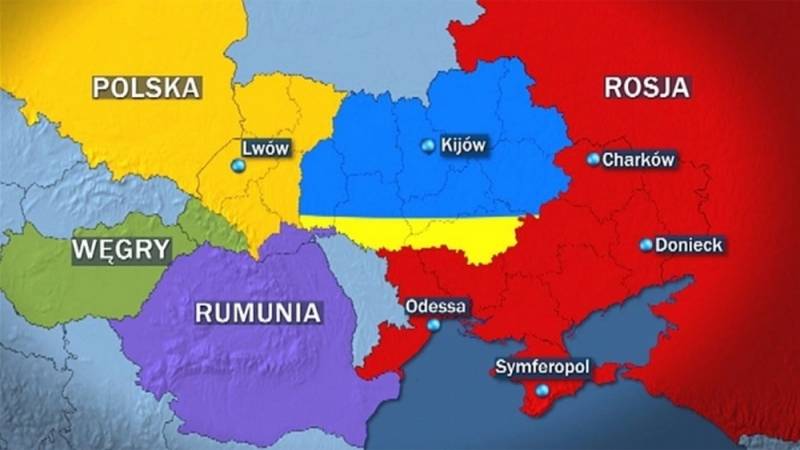 A special military operation to denazify and demilitarize Ukraine has been going on for the second month. Judging by the reports coming from the front, a radical change should soon occur there. The Nazi stronghold in Mariupol, which they occupied, will fall first. Our troops that have been released will complete the encirclement of the AFU grouping in the Donbass, which has already shot most of the accumulated ammunition and burned fuel for armored vehicles, and will defeat it. Then Kharkov will be liberated, and the RF Armed Forces will quickly take control of the Left Bank, moving further to the Black Sea, taking the port cities of Nikolaev and Odessa, which in itself means the inevitable collapse of Ukrainian statehood. But then what?


What will happen next, whether Russian troops will go to Western Ukraine, whether they will take Kyiv by storm, what the former Nezalezhnaya will turn into after the completion of a special military operation - all these important questions rightly worry the inhabitants of both Russia and Ukraine, where many of them have close relatives and friends. The Kremlin still does not give any specific explanations on this matter, however, certain signals are beginning to arrive “from below” that may give a hint of what may happen in the foreseeable future.

Thus, the head of the recently officially recognized Luhansk People's Republic, Leonid Pasechnik, recently said that the LPR could join the Russian Federation:

I think that in the near future a referendum will be held on the territory of the republic, at which the people will exercise their absolute constitutional right and express their opinion on joining the Russian Federation.
True, he soon made a clarifying statement, explaining that it was his personal opinion. In the State Duma of the Russian Federation, Pasechnik was quite reasonably answered that while the hostilities were going on, it was premature to talk about holding a referendum.
It should be noted that on the eve of the adoption of the fateful decision on the recognition of the DPR and LPR at the Security Council, President Putin publicly asked the opinion of the country's top officials on this issue, and the head of the foreign intelligence service, Sergei Naryshkin, clearly nervous, let it slip that he was not only for recognition, but also for acceptance of the DPR and LPR into the Russian Federation:

I support the proposal to join the Donetsk and Lugansk People's Republics into the Russian Federation.
To this, Vladimir Vladimirovich replied that it was not this issue that was being discussed, but recognition or non-recognition. It turned out pretty significant then. And on the eve of the future fate of the Kherson region, the former People's Deputy of Ukraine from the "Party of Regions" Anton Zhuravko, who has been living in Russia since 2015, spoke:

I declare to you with full responsibility: neither the Armed Forces of Ukraine, nor the SBU, nor the authorities of Ukraine influence the situation in Kherson and the region. I ask you, people of Kherson, calm down, no Ukrainian government will return.
These are very important words that many citizens of Ukraine who find themselves in the territories controlled by the RF Armed Forces would like to hear. True, it would be more reliable if President Putin or his press secretary Dmitry Peskov said them personally. Nevertheless, there has been a certain positive trend.

So, a month after the start of the NMD, military-civilian administrations began to appear in the cities liberated from the power of the Kiev regime, which take matters of local self-government into their own hands. A massive call-up of volunteers from Russia has begun, which will obviously not be involved in tank battles, but rather in clearing the rear in the occupied territories from the unfinished remnants of the garrisons of the Armed Forces of Ukraine, the National Guard, theterodefense and simply armed gangs. As you can see, certain statements about the possible future of the regions of the former Nezalezhnaya came from below. Why did such a significant change occur, which everyone had been waiting for a whole month?

This is probably due to the clear desire of Poland, Hungary and Romania return their former territories in Western Ukraine. The most resolute here is Warsaw, which, apparently, received personal approval from President Joe Biden. The question of whether Russia should impede this process or, on the contrary, turn a blind eye to it, is highly debatable. The main pros and cons of such an outcome, we detail considered previously. However, if something like this does happen in reality, it will completely change the geopolitical picture in Eastern Europe.

At first, the NATO bloc will de facto further expand to the East.

Secondly, Russia will have to counter expand to the West in order to ensure its national security.

Thirdly, Ukraine as a single sovereign state will finally cease to exist.

The option of some kind of "buffer" non-bloc federal state between Russia and the North Atlantic Alliance will finally cease to meet the new challenges. Everything, the time for such a scenario is already gone, the input data has seriously changed. Our country really have expand westward towards NATO.

The most expedient now seems to be joining the Russian Federation, following the DPR and LPR, Kherson, Kharkov, Zaporozhye, Dnepropetrovsk, Nikolaev and Odessa People's Republics as part of the new Novorossiysk Federal District. We are unlikely to receive more sanctions than now, but in this way Russia will be able to truly reliably denazify the South-East of the former Square and deploy its military infrastructure on its territory in spite of NATO. Crimea will receive a reliable water supply and a land transport corridor. Central Ukraine without the Western regions will be cut off from the sea, demilitarized and will return to the format of Little Russia, which was before they began to sculpt a geopolitical "Frankenstein" from it, which now has to be denazified with great bloodshed.

Little Russia, on the other hand, should turn into a federation and can retain its statehood as the legal successor of Ukraine, but subject to the recognition of Crimea and Novorossiya as Russian regions, joining the EAEU, the Union State and the CSTO, introducing Russian as the second state language, and also placing the military infrastructure of the Ministry of Defense on its territory RF. Wanted "decommunization"? Get it.
Ctrl Enter
Noticed oshЫbku Highlight text and press. Ctrl + Enter
Reporterin Yandex News
Reporterin Yandex Zen
48 comments
Information
Dear reader, to leave comments on the publication, you must sign in.