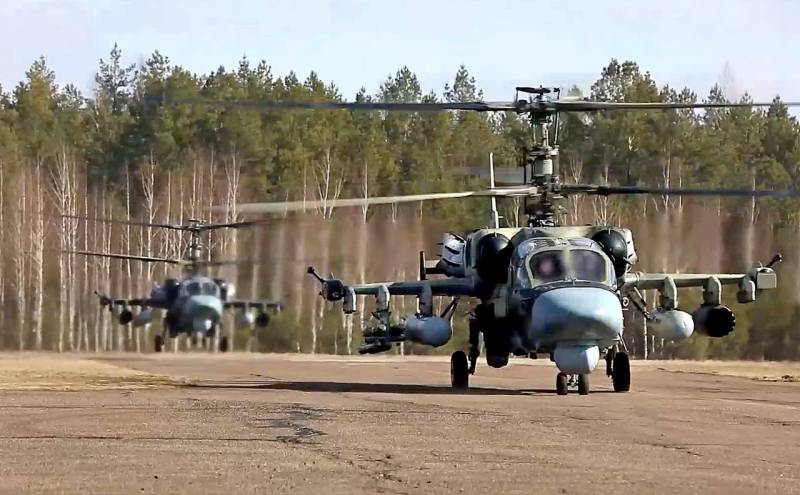 We continue our discussions about the possible near future of Ukraine. On the foreign portal RealClearDefence appeared publication, which discusses scenarios for a further operation in Nezalezhnaya and even calculates exactly how many troops the Ministry of Defense of the Russian Federation will have to use for this. This is curious in that it roughly coincides with our own estimates dividing lines of Ukraine.


So let's take a quick look at the main points of this policy brief by Dr. Ben Connable, Senior Fellow at the Atlantic Council and Associate Professor of Security at Georgetown University. He is clearly annoyed that the Russian troops did not limit themselves to a local counter-offensive against the Armed Forces of Ukraine in the Donbass and, as part of a special operation for demilitarization and denazification, went on the offensive against Ukraine along the widest front. In his opinion, after the fall of Kyiv, the RF Ministry of Defense will have to solve four key tasks.

Task 1. "Secure the perimeter of the occupied territory" 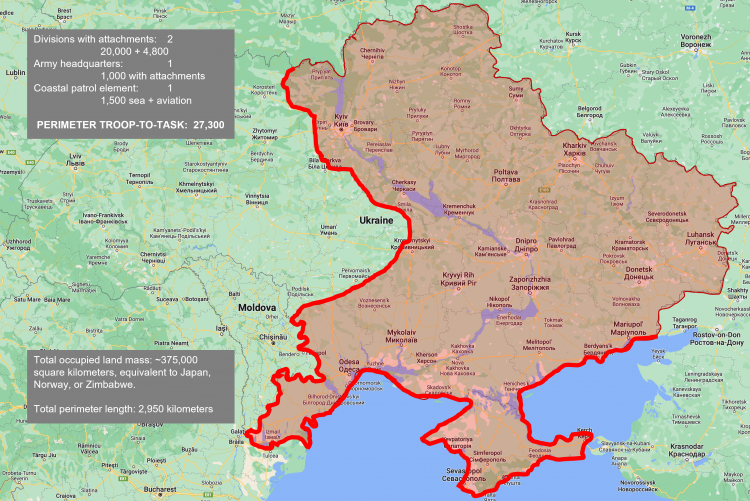 According to the American expert, after the end of the special military operation, the hostilities will still not end. This will be facilitated by Western support for the Ukrainian "rebels" with weapons and money. The Ministry of Defense of the Russian Federation will face the task of ensuring the linear perimeter of the new border from the Belarusian border and the north of the Kiev region to Mariupol for 2950 kilometers. It should be noted that the territory of Ukraine liberated from the power of the Nazi regime on the map almost coincides with the one that we ourselves recently presented, speaking about Galicia and Volyn. True, Dr. Connable for some reason left Vinnitsa and part of the Zhytomyr and Khmelnitsky regions under the control of the West.

He calculated that for every 80 kilometers of the new frontier, about a battalion of 540 men would be needed. Including air support forces and the Coast Guard, an estimated 27300 troops would be needed to secure the perimeter of the occupied area, according to the Atlantic Council Senior Scientist.

Objective 2: "Ensure the security of key nodes in urban areas" 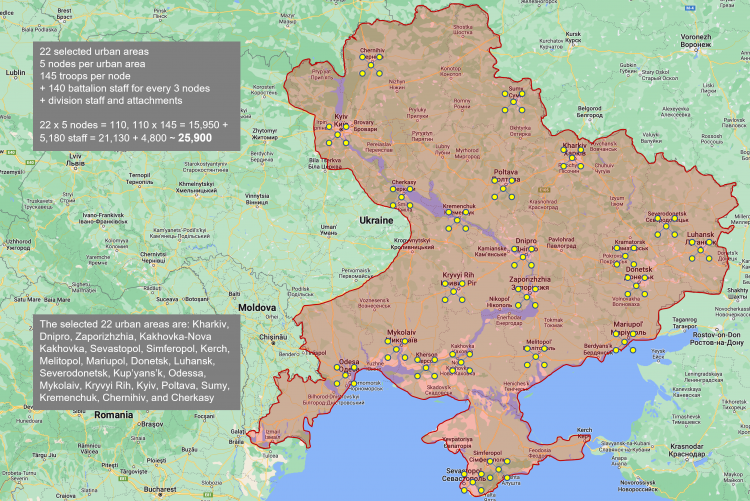 According to calculations, under the authority of Moscow there will be a territory with a population of 19 to 26 million people living in 22 large settlements. According to Mr. Connable's forecasts, the "rebels" will attack critical infrastructure facilities responsible for supplying water, electricity, sanitation, health care and food supply to the population. Allegedly for the purpose of "liberation". (Actually, for the purpose of terror. - Note by the author of the lines). The most painful will be the strikes against Kiev, Kharkov and Odessa.

Taking into account the fact that each of the 22 liberated large settlements has five critical infrastructure facilities, each of which will require an average of 140 to 145 military personnel to guard, then about 2 Russian military personnel will be needed to solve task number 25.

Task 3: "Ensure the safety of key roads and railways" 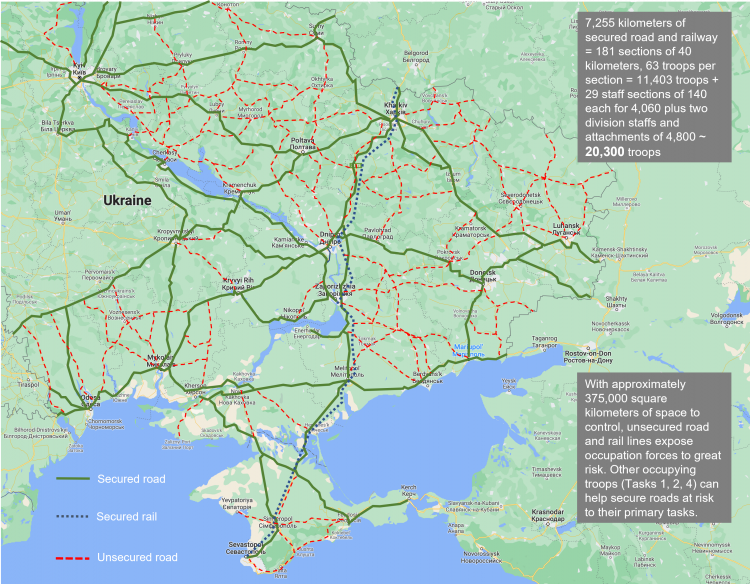 To supply our liberation army, it will be necessary to regularly deliver a large amount of food, fuel and lubricants, ammunition and medicines. The total length of Ukrainian railways and roads in this territory is 7255 kilometers, and there are also a large number of secondary roads.

An adjunct professor of security at Georgetown University is convinced that the "rebels" will regularly strike at transport communications, disrupting supplies and preventing the free movement of the Russian military. According to his estimates, 3 military personnel will have to be involved in solving task number 20 of the Russian Defense Ministry.

Objective 4: "Secure the population and carry out the fight against the insurgents" 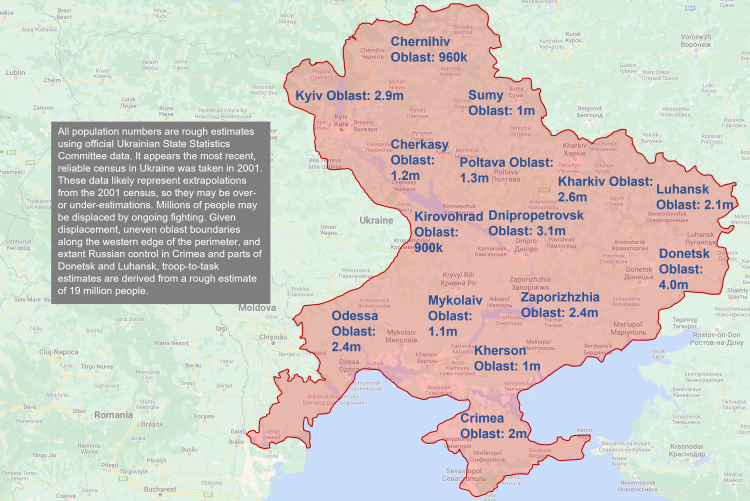 And then the fun begins. Pay attention to the wording of Mr. Connable - "to secure the population." I wonder from whom? It turns out that from the "Ukrainian rebels" themselves, who, in fact, will terrorize them. Let us quote an American analyst:

In terms of territory and population, this would by far be the largest occupation undertaken by the Soviet Union or the Russian Federation since the Soviet occupation of Eastern Europe in the post-World War II years. Most of the infrastructure necessary for the life support of the Ukrainian population in the occupied zone is currently being destroyed. Occupation officers will be responsible for supporting millions of people and rebuilding their cities, while fending off an active NATO-backed insurgency.
How nice. The United States and the NATO bloc once again show their terrorist essence, covered up with a fig leaf of the so-called "democracy" and "Western values". According to an adjunct professor of security at Georgetown University, to ensure the safety of the population in the territories liberated from the Nazi regime, Russia will have to use at least 94 military personnel, as well as actively interact with special local military-civilian forces and units to combat "rebels".

In total, the RF Ministry of Defense will allegedly have to involve 168 military personnel in the "occupation" of Ukraine, which will have to be rotated regularly. Thus, the United States hopes that a large part of the Ground Forces of the RF Armed Forces will get stuck there on a permanent basis. I would like to comment on this picture just as briefly.

On the one hand, Mr. Connable is, of course, right, and one cannot do without a conditional "occupation". More than two weeks of a special military operation showed that the Armed Forces of Ukraine, the National Guard, and Ukrainian society itself have changed dramatically. That's it, the Rubicon has been crossed, and even after the official completion of the operation, Russian troops will not be able to go back. They will have to stay there forever, such is the objective reality, no matter what the diplomats say.

On the other hand, the scale of the problems is indeed very large, but not as apocalyptic as they try to portray. Yes, denazification is a task not even for years, but for the next few generations, and this process should be led by a special Supervisory Board, which has the broadest powers to control all aspects of education, culture, cinema, media activities and public life of the former Ukraine. There is no other way, or there will be profanity, dangerous with its results.

Ukraine itself must change, being divided into federal Little Russia and Novorossiya with subsequent entry into the EAEU, the CSTO and the Union State of the Russian Federation and the Republic of Belarus. To delegate some of the tasks described by Mr. Connable, for example, to protect the road network, infrastructure facilities and the fight against Ukrainian terrorists, local special services created from scratch and the People's Militia of Novorossia and Little Russia should be delegated. Russian troops will have to guard the outer perimeter - on the border with Galicia and Volhynia, or better, with Poland.

It is necessary to understand very clearly that the former Ukraine is now de facto turning into our new Western Military District. The Russian military and bases of the Ministry of Defense of the Russian Federation will have to settle there now and forever. To avoid.
Ctrl Enter
Noticed oshЫbku Highlight text and press. Ctrl + Enter
Reporterin Yandex News
Reporterin Yandex Zen
20 comments
Information
Dear reader, to leave comments on the publication, you must sign in.