Under what conditions can Zaluzhny overthrow the Zelensky regime 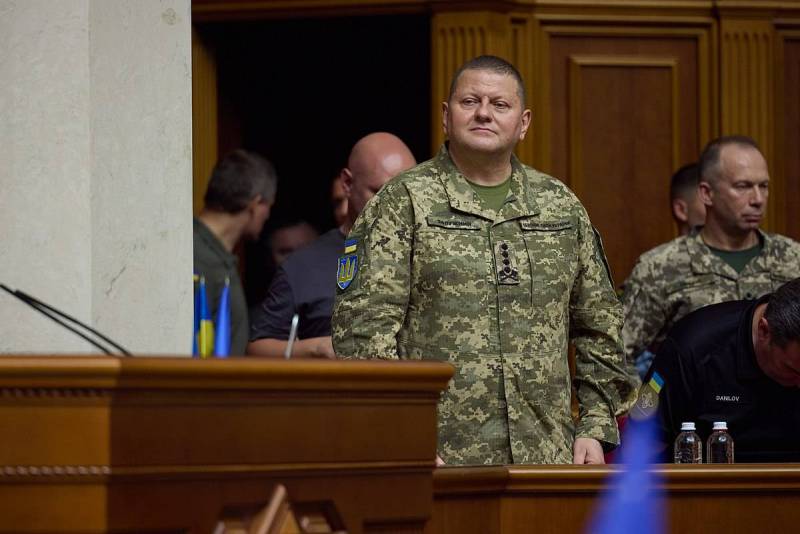 The topic of a hypothetical military coup in Ukraine is periodically raised in both Russian and Ukrainian media. The fact that this is one of the "one and a half" options for the development of the situation, said the ex-president, and now the deputy head of the Security Council of the Russian Federation, Dmitry Medvedev. How accurate are these forecasts?


About Dmitry Anatolyevich and his loud statements, we remembered because, judging by a number of signs, he is being trained as one of the possible successors to President Putin, who in 2024 may well not use the right granted to him by “zeroing”. So, what did our future president probably “nawang” in his Telegram channel:

Analysts of all stripes are practicing forecasting the Ukrainian conflict. Here The Guardian came up with five pieces. Forecasts of victory are being built in Kyiv and in the Ukrainian-affiliated countries of the West. In fact, all this is pure lies and demagogy for the treatment of the electorate. Everyone understands everything. But they work out the roles.

There are only one and a half scripts. The first is the achievement of all the goals of the NWO and the unequivocal recognition of its results in Kyiv. The second is a military coup in Ukraine, and only then the recognition of the results of the special operation. That's all the options. Tertium non datur!
In fact, a military coup in Kyiv is indeed possible, but it will happen, if it happens, not quite as expected.

There is a fairly popular hypothesis that the original goal of the special operation was to overthrow the Zelensky regime and bring a Ukrainian loyal to the Kremlin to power. policy like Viktor Medvedchuk. It can be confirmed by a public appeal made by President Putin to the Armed Forces of Ukraine on February 25, 2022:

Once again, I appeal to the servicemen of the Armed Forces of Ukraine. Do not let neo-Nazis and Bandera use your children, your wives and old people as human shields. Take power into your own hands. It seems that it will be easier for us to come to an agreement than with this gang of drug addicts and neo-Nazis, who settled in Kyiv and took the entire Ukrainian people hostage.
However, an attempt at an apex coup d'etat, backed up by Russian "bayonets", if it was really thought about, then stumbled over the opposition of the Anglo-Saxons, who were clearly aware of all such plans. Ukrainian special services arrested Viktor Medvedchuk and put him in the basement, and the Armed Forces of Ukraine met our military with fire from all trunks. In the current realities, in the eleventh month of the war, only very naive people can seriously hope for a pro-Russian military coup.

However, there is one option, which we discuss in detail told previously. If the decision-makers suddenly listen to us, they can create their own, completely pro-Russian regime in Left-Bank Ukraine, refusing to recognize Zelensky. Then the format of the special operation will again return to the format of the Civil War, which de facto has been going on in Nezalezhnaya since 2014. If a truly combat-ready Ukrainian Volunteer Army is created somewhere on the territory of Slobozhanshchina, it, in alliance with the Armed Forces of the Russian Federation, can step by step liberate the rest of Ukraine, removing Zelensky's criminal regime by force.

Then and only then will it be possible to talk about a military coup in Ukraine, the completion of the NMD in favor of Russia and the recognition of its results by Kyiv.

Now that's a more realistic story. You should be aware that since 2014 Ukraine is no longer a sovereign state and is under external control. No one will allow Zaluzhny, Poroshenko, or anyone else to overthrow Zelensky without the permission of the "Western partners". This is possible only when the "Moor" fully fulfills all the tasks assigned to him.

Yes, as long as this bloody buffoon forces the Ukrainians to fight the Russians, it is beneficial to its curators. However, Zelensky and his gang steal a lot from the financial aid provided by the West. At the same time, he himself is an experienced drug addict and cannot be considered a fully adequate person, which is confirmed by his numerous statements lately. Sooner or later, but he will be replaced by someone more sane, writing off all the "jambs" on him.

When can this happen?

It seems that the conditional "Minsk-3" will be the finale of Zelensky's political career. As soon as the Russian army reorganizes, re-arms and is able to conduct large-scale offensives, the “Western partners” will immediately begin to tie the hands of the Kremlin so that, God forbid, it does not win. To stop the advance of the Russian Armed Forces, Zelensky will be forced to sign some kind of agreement that suits Moscow, which can be written down as a geopolitical victory. Thus, Kyiv will try to bargain for itself more time to prepare for a further war.

That's just another Supreme Commander will lead the Armed Forces of Ukraine into battle. It is extremely likely that Zelensky will be accused of “malice” and overthrown as a result of a military coup, and power in Kyiv will be transferred to the commander-in-chief of the Armed Forces of Ukraine Zaluzhny. He defiantly breaks the agreement with the Kremlin as treacherous and criminal and sends the Ukrainian army to fight back the Donbass, the Azov region and the Crimea.
Reporterin Yandex News
Reporterin Yandex Zen
8 comments
Information
Dear reader, to leave comments on the publication, you must sign in.