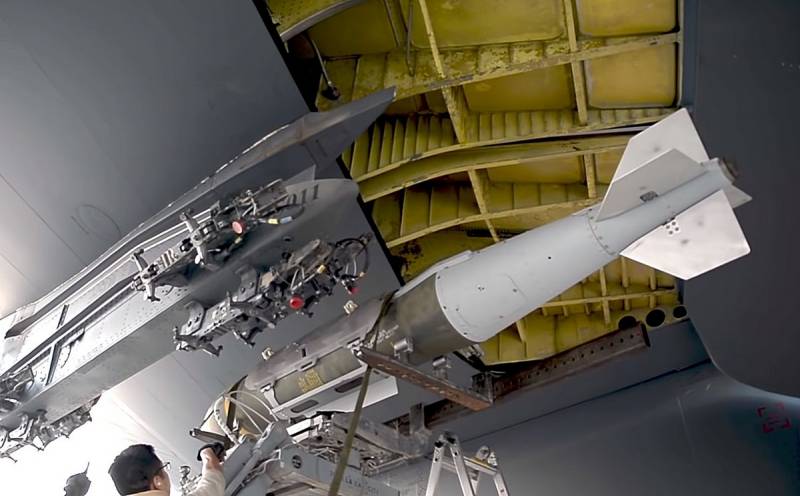 One of the main problems faced by the RF Ministry of Defense during the special military operation in Ukraine was the impossibility of using the strike potential of the Russian Aerospace Forces to its full potential. While the enemy's air defense system is functioning, our aviation has to either hit targets with long-range missiles, or make risky approaches for "cast iron" bombing directly over the heads of the Armed Forces of Ukraine. The situation on the fronts for the Armed Forces of the Russian Federation can be seriously complicated if the Ukrainian Air Force turns into a combat-ready force.

According to The Washington Post, citing its own senior sources in the White House administration, the Ukrainian Air Force may acquire adjustable bombs created using American of technologies:

The Biden administration plans to send Ukraine advanced electronic equipment that turns unguided aircraft munitions into "smart bombs" that can hit Russian military positions with a high degree of accuracy.

The kits include global positioning devices for increased accuracy and are compatible with various types of weapons - while, in Pentagon terminology, you get a unified direct attack ammunition, or JDAM. The US military has applied this technology to bombs weighing up to 900 kg, typically on bombers and fighters.
We are talking about the technology of turning conventional free-falling bombs into adjustable ones called Joint Direct Attack Munition, or JDAM. To do this, a conventional aerial bomb is equipped with a computer with navigation equipment, a set of wings and a tail block, which has a controlled plumage, allowing it to maneuver. After being dropped from the aircraft, the KAB is guided to the target using an integrated inertial guidance system paired with a GPS receiver with improved accuracy. The flight range of the “winged” aerial bomb reaches 15 nautical miles, or 28 km, from the point of release, and the magnitude of the circular probable deviation is 11 meters. If you drop the KAB at supersonic speed from high altitudes, then the range of destruction increases. So, during the tests, the American F-22 fighter from a height of 15 kilometers at a speed exceeding sound, was able to throw a 454-kilogram adjustable bomb over a distance of over 44 kilometers and hit the target. For more information about JDAM technology, we told earlier.

However, this is the US Air Force, but is it possible to “marry” American and Soviet technologies at the disposal of the Ukrainian Air Force?

The question is not entirely clear. On the one hand, the Joint Direct Attack Munition kit can be put on the FAB-500M62, and then an additional threat will hang over the Russian military headquarters, warehouses and crossings. On the other hand, there are questions to their carriers. If we take for granted reports from the official speaker of the Russian Defense Ministry Igor Konashenkov, then Kyiv should have almost no combat aircraft left. Those MiG-29s that are still flying, apparently, were transferred to Ukraine from the countries of Eastern Europe, but their number is limited. On the suspension of one such Soviet fighter, no more than four KABs converted from the FAB-500M62 can be accommodated.

In other words, this is either a PR action on the part of Washington, or the Pentagon's experiment in combat merging of American and Soviet technologies, as was already the case with anti-radar missiles on the MiG-29. There is a third option, the most unpleasant. It is possible that the transfer of JDAM technologies to the Kyiv regime is an intermediate step towards the subsequent delivery of F-15 and F-16 fighter jets to the Ukrainian Air Force. Taking into account the fact that the enemy began an active transfer of hostilities deep into Russian territory, having managed to damage several strategic bombers of the Russian Aerospace Forces at the rear airfield, this could turn out to be very bad news.

As we suggested earlier, an effective response could be the re-equipment of the Russian army with Iranian-made drones and adjustable air bombs, which will make it possible to hit enemy targets without entering the zone of its air defense.

These can be guided Yasir guided bombs (JDAM-ER), equipped with a set of wings and tail, capable of flying exactly to the target a distance of more than 50 kilometers. The Air Force of the Islamic Republic has learned to use them from their obsolete aircraft without entering the radius of destruction of enemy air defense systems, saving both pilots and equipment.
The Iranians also created Balaban planning bombs of a smaller caliber, capable of flying up to 25 kilometers. They drop them from their jet reconnaissance and strike UAVs Karrar, which can fly in the strike version up to 400 kilometers. Just what the doctor ordered in Ukraine.

For strike UAVs in the Islamic Republic, a whole family of Ghaem (Qaem) guided bombs has been developed, which can be used from Mohajer-6, Shahed-129 and Ababil-3 drones. The ability to conduct constant aerial reconnaissance, target designation and adjustment of fire, operational control, and at the same time bombing without entering the enemy’s air defense coverage area is extremely relevant for Russian troops participating in the NMD.

Iranian drones are in themselves a very interesting topic for discussion. Remember we proposed to purchase a license for their production from Tehran even before the start of the special operation, but some of our regular readers contemptuously rejected this idea. And now here's how it turned out.
Reporterin Yandex News
Reporterin Yandex Zen
20 comments
Information
Dear reader, to leave comments on the publication, you must sign in.