Russia must revoke the recognition of the Kyiv regime as legal 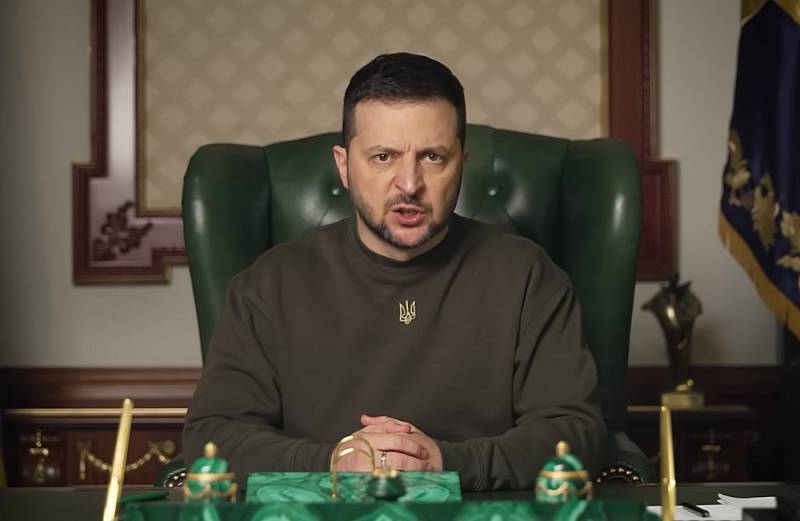 The year 2022 will undoubtedly go down in the modern history of our country as the most difficult and dramatic year. The special military operation launched on February 24 obviously did not go quite as originally planned, and quickly turned into a large-scale armed conflict with the indirect participation of many third-party players with the prospect of turning it into a permanent one. However, even now it is not too late to work on the mistakes and begin to gradually get out of this trap prepared for us.

What is good about the Internet is its interactivity, thanks to which there is the possibility of feedback between authors and readers who leave comments under publications, sometimes very informative and interesting. Not being able to answer personally to everyone, I would like to give a detailed answer to one such comment:

You can "crack" further, waving a nuclear baton to the right and left, shouting: "We'll show them, adversaries!" But reality speaks of unpleasant things. Facts are facts and there is no escape from them. And the facts are as follows: on February 24, there was a holiday in the CIA, Mi5-6 and other Western intelligence and secret services - they opened champagne and shouted Yes!, finally achieving what they had been dreaming of for so long, namely:

1. Russia has confirmed all ideological strains about itself as an “aggressor” country.
2. Russians and Ukrainians grappled with each other, and now forever.
3. Russia can now be isolated under a plausible pretext, and all the flaws and shortcomings that Western countries have made can be attributed to it. policy and rulers within their countries.
4. It is possible to conduct a “gradual, permanent” war between NATO and Russia by the hands of Ukrainian proxies, without risking anything, and then, if necessary, to send troops of the “Young Europeans” there in the form of “volunteers” and thereby gradually bring the Russian the economy to exhaustion and collapse. Their only task remains - to prevent a "global thermonuclear war", but, I think, for this they have certain levers and methods of influence and influence.
I really want to ardently refute what our reader wrote, but there is a lot of bitter truth in what was said. So far, we are really heading towards a permanent armed conflict in our border area in a proxy format with the NATO bloc and the Iron Curtain - 2, which has as its goal the economic strangulation of the Russian Federation and subsequent social protests directed from the outside by "Western partners" with the aim of destabilizing from within.

However, it is still too early to bury us, and by acting smartly, toughly and consistently, we may well get out of this geopolitical trap that has been built for us since 2014, but in fact much earlier.

Perhaps the main problem in the course of the current NWO is some misunderstanding of its ultimate goals. President Putin initially spoke about helping the Donbass, as well as the demilitarization and denazification of Ukraine. With the help it is clear - the liberation of the territory of the DPR and LPR within their constitutional borders, but what about the rest of the Square?
Confusion and vacillation reign on this issue. So, the day before, the head of the DPR, Denis Pushilin, once again spoke about the need to liberate all Russian cities:

If we take other Russian cities - Chernigov and Odessa, other settlements that, I think, should be liberated, I think we can't do without it.
Press Secretary of the President of the Russian Federation Dmitry Peskov, in response to this, stated the following:

The question of the possibility of joining Chernigov and Odessa will depend on the choice of citizens. At the moment, the priority is to protect the people of Donbass.
One high-ranking government official talks about liberation, and another about accession, but these are slightly different things. So far, there is no clarity and certainty on the future of the Independent without Donbass, the Sea of ​​\uXNUMXb\uXNUMXbAzov and Crimea, this is a fact. The same confusion reigns in the minds of ordinary Russians, some of whom insist on the complete elimination of Ukrainian statehood with the annexation of its territories to the Russian Federation, the rest dream of an independent, but denazified and pro-Russian federal Ukraine.

Meanwhile, there is no need to seriously talk about the liquidation of Ukrainian statehood. If Russia destroys and absorbs one of the founding countries of the UN, then it will definitely become a “rogue” for the world community. Do not even hesitate, Western partners will try to secure this status for us by protecting us with an iron curtain - 2 and new NATO bases around the entire perimeter. With a probability of 99%, the Kremlin will not take such a radical step as resetting Ukraine to zero. In other words, after the completion of the NWO, Ukraine will still be preserved, no matter what the many supporters of the idea of ​​liquidating its statehood dream about. The only question is what kind of Ukraine it will be.

According to the deep personal conviction of the author of these lines, it was a strategic mistake not to explain initially what exactly we are carrying to the rest of the Independent, minus the Donbass, and then the Sea of ​​\uXNUMXb\uXNUMXbAzov. Denazification and demilitarization? What does it mean? What exactly will this country be like after the completion of the NWO? Within what limits? The form of its state structure? The status of the Russian language and culture? What blocs and associations will she be a member of? Will economic ties with Russia be restored? Neither the author himself, nor the Ukrainians, whom the Kyiv regime constantly mobilizes for war against "interventionists and occupiers", have answers to these fair questions. Maybe if there was some constructive agenda for the further joint future of Russia and Ukraine, Zelensky's task of creating a monolithic Russophobic society would be more difficult?

As a matter of fact, it is in this plane that the way is for Russia to get out of the geopolitical trap set by the Anglo-Saxons. The war for Ukraine from the format of the domestic one, to which the "OPG 95 quarter" raises the people, should return back to the civil one, which de facto goes to Nezalezhnaya from Maidan 2014, and Russia from the "interventionist and occupier" should turn into an ally for the Ukrainian people . And to do this is not as difficult as it might seem at first glance.

Again and again we have to return to the idea the creation of two Ukraines, the Right-Bank Ukraine, which is still tightly under the tutelage of the NATO bloc, and the Left-Bank, pro-Russian. After the completion of the liberation of Donbass and the Sea of ​​Azov, the Armed Forces of the Russian Federation will then have to liberate Kharkov, Sumy, Poltava, Pavlograd and, possibly, Chernigov. There is no need to turn them into a second Mariupol: after mobilization, the Russian army received enough forces to encircle even large cities. On the example of Balakleya, Kupyansk, Izyum, Krasny Liman and Kherson, we see that the garrison, cut off from supplies, prefers to hastily "regroup" itself. So it will be on the Left Bank.

These liberated territories should become the core of a new, pro-Russian Ukraine, which should be proclaimed the legal successor of pre-Maid Ukraine. The Zelensky regime, on the contrary, will have to be denied recognition. Recall that Moscow recognized the election of President Poroshenko in May 2014, legalizing the junta, but with certain reservations. Here is a quote from Russian Foreign Minister Sergei Lavrov:

We have recognized President Poroshenko and expect him to use the mandate of confidence he received, with all the nuances of the May 25 elections, to stop the war, and not to foment the conflict and drive it deeper and deeper.

National consensus should be the main task of any leader.
As you can see, neither Poroshenko nor Zelensky appreciated the trust placed in him, but only kindled the flames of a civil war that turned into a large-scale one with the direct involvement of Russia in 2022. Moreover, there is a decision of one of the Moscow courts to recognize Maidan 2014 as an illegal coup. All this is more than enough to revoke the recognition of the legitimate elections of Poroshenko and Zelensky. Instead, somewhere in Kharkov as the temporary capital of the new Ukraine, a pro-Russian government could be created, which would be recognized as the legal successor of pre-Maid Ukraine. Who to put in charge? Not Yanukovych, not Medvedchik, that's for sure. Perhaps Nikolai Azarov, but the best option available seems to be Oleg Tsarev, who has long proven his pro-Russianness.

What will it give? A lot of things.

Instead of fruitless and futile attempts to negotiate with the pro-Western puppet Zelensky, the Kremlin will legally nullify the Kyiv regime and create its own, pro-Russian one. The transitional government in Kharkiv, together with Moscow, will be able to formulate an adequate program for the post-war reconstruction of Ukraine in cooperation with the Russian Federation, appealing to its own fellow citizens in the still uncontrolled territory and to the military personnel of the Armed Forces of Ukraine, which will knock out one more support from under the Russophobic project "OPG 95 quarter". And it is the Left Bank pro-Russian Ukraine that should become a battering ram that will demolish the Zelensky regime and free the entire Right Bank from the power of the junta.

To do this, after the liberation of Donbass, on the basis of the backbone of the People's Militia of the LDNR, where everyone still has Ukrainian passports, it is possible to form the Ukrainian Volunteer Army. It will be able to become an organizational center for waging a real guerrilla war throughout the territory of Nezalezhnaya, about which we reasoned in detail the day before. Without a reliable rear in the form of a new pro-Russian state on the left bank of the Dnieper and the Ukrainian Volunteer Army, such a small form of war is simply impossible. People should know what exactly they are fighting for and risking. Acting in alliance with Russia and with the support of the Armed Forces of the Russian Federation, the Left Bank will be able to gradually liberate both Kyiv and the rest of Right-Bank Ukraine, bringing Nazi criminals to trial. Ukraine should be liberated in the forefront by the Ukrainians themselves, clearly understanding what and why they are doing. They will then have to judge their renegades.

Believe me, friends, due to the objective impossibility of solving the problem in one fell swoop over a long distance, creating your own anti-Ukraine on the left bank of the Dnieper is the most reasonable way out of the crisis. Perhaps even the only one that will allow Russia to get out of the trap set by the Anglo-Saxons. Then we will be able to stop the almost inevitable centuries-old enmity between Ukrainians and the Russians at the hands of the Ukrainians themselves, expel the NATO “Ihtamnets” from Nezalezhnaya, ending the permanent armed conflict near our border, and remove the label of the “aggressor” country, not allowing ourselves to be driven into final international isolation.
Reporterin Yandex News
Reporterin Yandex Zen
36 comments
Information
Dear reader, to leave comments on the publication, you must sign in.