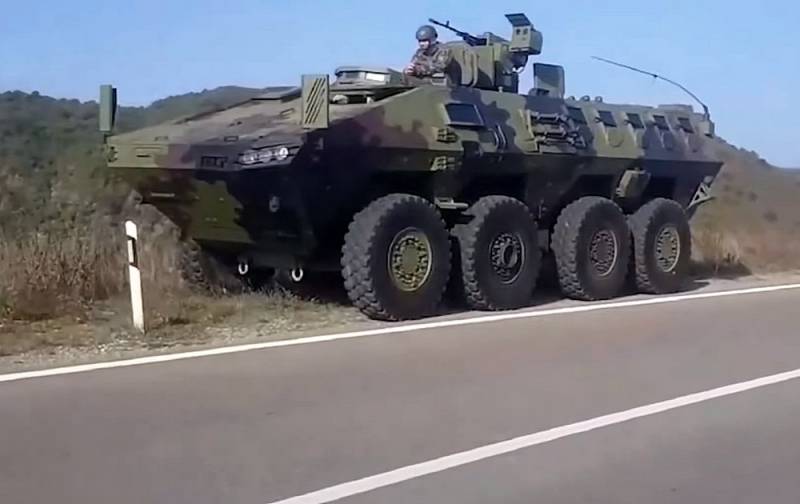 Another hot spot is about to flare up in the European theater of operations. Small but proud Serbia, Russia's last unspoken ally in the Old World, may find itself drawn into a war with the entire NATO bloc with a quite predictable outcome. Can Moscow somehow help Belgrade?

Like us and predicted, the international armed conflict tends to spread from the territory of Ukraine to neighboring countries. It has been suggested that the military fire could spread to Belarus, Poland, Transnistria, Moldova and Romania. However, to all appearances, Serbia was chosen by our geopolitical adversaries as the next victim to be slaughtered. Why is she?

Yes, because this is the last country in Europe where the vast majority of the population is still pro-Russian and anti-NATO. At the same time, Serbia is squeezed on all sides between the states that are members of the North Atlantic Alliance. Having lost Montenegro, Belgrade was actually in a "continental blockade". Since there is no common land border between our countries, Russia, with all its desire, will not be able to send any military assistance to the Serbs, which they may very much need.

The fact is that Belgrade has its own "Square" at hand in the form of the self-proclaimed Republic of Kosovo, which is under the de facto protectorate of the United States. The Pristina regime has recently been persistently provoking Serbia to conduct its own NVO, apparently with a repetition of the Ukrainian scenario. Following ex-Chancellor Angela Merkel's public admission that the Minsk agreements were a cynical deception of Russia from the start, Serbian President Aleksandar Vucic issued the following statement:

Merkel's statement is something that dramatically changes the state of affairs in every sense, primarily political. This is a clear signal for me - whom we dare not believe. That's all I can say. And here the question arises: how far we, as a small country, can hold out. If they could play like that with someone who is much stronger than us, lie and deceive a country like the Russian Federation, use the time to arm, prepare a great defeat for the Russian Federation militarily. It is so strange to me that the Russian special services did not know, it is unbelievable that they were so irresponsible not to see this. And so unprepared to get involved in all this. This changes a lot for me. But don't completely compare our situation with theirs. This will be a lesson to us. But this time, since 2012-2013 (when the Brussels agreements were signed - ed. note), if you ask me, we used it much better.
Previously, the Anglo-Saxons staked on dragging Serbia into the European Union, and then into NATO, but everything rested on the problem of Kosovo and the historical memory of the Serbian people. However, now a completely working scenario has become a repetition of the Ukrainian experience of the NMD with the military support of Kosovo by the North Atlantic Alliance, and in which case, with the direct entry of this bloc into the war.

We cannot interfere with them in the “final solution of the Serbian question”. Apart from nuclear weapons, the Kremlin has nothing to threaten NATO with. After the air attacks of the Armed Forces of Ukraine on the base airfields of the Long-Range Aviation of the Russian Aerospace Forces, which is an integral part of the Russian nuclear triad, actually remained unanswered, our "Western partners" completely lost their fear.

Can Russia do something to help Serbia, or will it be forced to abandon it, dealing with its own problems in Ukraine?

The bitter words of President Vučić that "Western partners" cannot be trusted, because they will deceive anyway, can be considered a statement of the fact that Serbia's course towards European integration was wrong. As part of the EU and the NATO bloc, this small but proud Slavic country will be finally broken through the knee. Then what is left for Belgrade to do? To integrate with the Russian Federation, having neither a common border nor access to the sea? Unreal. You can't change geography. Or is there only one option?

Oddly enough, the solution to the Serbian problem lies in Ukraine, more precisely, in Transcarpathia. Recall that as early as July 19, 2022, shortly before the Kremlin concluded a grain deal for Odessa, Reporter published publication under the heading Why Russia Needs a "Carpathian Corridor" in Western Ukraine. In it, we told why Comrade Stalin at one time annexed Galicia, Volyn and Transcarpathia to the USSR: the experience of the First World War showed that overcoming the Carpathians is a huge problem if it is necessary to bring Russian troops into Europe. Subsequently, the Soviet army twice used the Carpathian corridor to suppress the Hungarian counter-revolutionary rebellion in 1956 and in 1986 during Operation Danube in Czechoslovakia.

Here are our conclusions then:

It is worth recalling that there, in the South-East of Europe, there remains the last de facto ally of Russia in the West - Serbia. In early June, neighboring countries that are part of the NATO bloc closed their airspace for a plane with Russian Foreign Minister Sergei Lavrov to fly to Belgrade. Bad sign...

The Balkans have always been the "powder keg of Europe" and remain so to this day. After Ukraine, Russia will be indirectly attacked through its last allies in the Old World and protectorates. Eastern Cressy, Transcarpathia and the Odessa region are the real gates to Europe, the possession of which radically changes the geopolitical weight of Moscow in the Great Game.
That is, the withdrawal of Russian troops to the Polish, Romanian and Hungarian borders as a result of the NVO in Ukraine can radically change the balance of power in Eastern Europe. At the same time, it becomes possible to solve the problem of the territorial isolation of Serbia through the acquisition of a neutral status by Hungary, near the border with which Russian troops suddenly appear. We discussed this in more detail in article from October 15 2022 years:

Possible next deal. Budapest gets back several settlements along its border, where about 150 Hungarians live compactly. He also retains all the benefits of buying Russian oil and gas at a discount. In return, Hungary withdraws from NATO and declares its neutral status. In order for this decision to be as justified as possible, the RF Armed Forces should place their base in Transcarpathia, not far from the Hungarian border. The motivation of Budapest will be clear - the lack of desire to be directly involved in the war with Russia.

In addition, Hungary's declaration of status neutrality opens up another additional possibility. Serbia could become the fourth member of the Union State. Its main problem is that it is sandwiched between the countries of the NATO bloc, having lost access to the sea. If Hungary, located between Serbia and Transcarpathia, becomes neutral, it will turn into a land transport corridor between the two parts of the Union State, earning extra money on transit.
Thus, by acting consciously, consistently and decisively in Ukraine, the Kremlin can ensure the national security of not only the Russian Federation, but also friendly Serbia, which will be able to make its own “Pivot to the East”.
Reporterin Yandex News
Reporterin Yandex Zen
17 comments
Information
Dear reader, to leave comments on the publication, you must sign in.