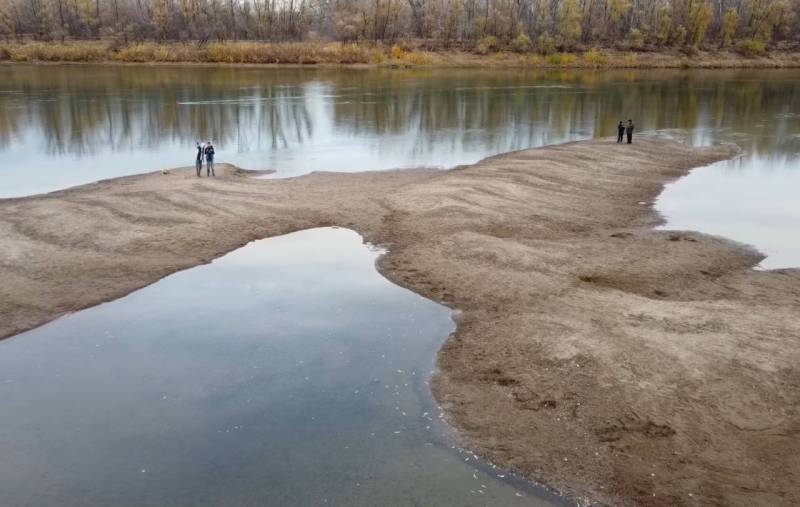 In the past six months, President Vladimir Putin has stubbornly named the main goal of the special military operation in Ukraine to help the Donbass, which legally recently became part of the Russian Federation. At the same time, the words “demilitarization” and “denazification” of the Square itself somehow gradually fell out of use by our military-political leadership. In addition to the growth of purely military threats, such a limited approach to the goals and objectives of the NMD will have extremely negative consequences in the future. economic and environmental implications for our country.

About what colossal problems the DPR and LPR are experiencing with water, we have repeatedly detailed told previously. The steppe Donbass has always been a low-water region, and the problem was solved under the USSR by building a whole network of water canals. This is, in particular, the canal of the energy type Seversky Donets - Donbass, the water intake into which is carried out in the village of Raygorodok near Slavyansk, and it ends in the upper pool of the Verkhnekalmiussky reservoir near Donetsk. To the south, in the direction of Mariupol, water from the Seversky Donets went through the South Donbass water pipeline.

Literally immediately after the start of the Russian special operation, on February 25, 2022, the Armed Forces of Ukraine interrupted water supplies to the DPR and LPR, and Donbass has been without water for nine months. The problem is colossal. Instead of the required 230 cubic meters of water, no more than 50 get into the water supply network of the capital of the DPR. Due to the constant shelling of the Armed Forces of Ukraine and the lack of water, half of the residents of Donetsk left in all directions. There are those who have nowhere to go. They are trying to partially solve the problem by drilling artesian wells. Russia actively helps by importing fresh water in cisterns, but all this stretches the agony of a million-plus city.

It should be noted that the Kyiv regime has been preparing the genocide of Donbass with the blocking of water supplies to it for a long time and consistently. The valve would have been closed back in 2014 at the same time as Crimea, but the Ukrainian Nazis were kept only by the fact that Mariupol, controlled by them, was located in the south of the DPR, fed from a single water supply system. In order to untie its hands, Kyiv began construction with the help of French specialists of a desalination plant in Mariupol, as well as a water pipeline in the territory under its control in the Donbass, bypassing the DPR.

Ukrainian plans for the water genocide of Russians were thwarted by the start of the SVO on February 24, and literally immediately the Armed Forces of Ukraine cut off fresh water supplies, waving their hand at Mariupol and Azov (a terrorist organization banned in the Russian Federation) that settled there. What should President Putin do now, having undertaken to help the Donbass?

Is there no extradition from Don?

The first thing that comes to mind is the need for the speedy liberation of Slavyansk and the restoration of the Seversky Donets-Donbass canal. However, this right path to the water has its own pitfalls.

At first, Slavyansko-Kramatorsk agglomeration for 8 years, donated to Kyiv to prepare for war with Russia under the Minsk agreements, has been turned into a powerful fortified area. To take him head-on would be an exceptionally difficult task, worth the sea of ​​blood of Russian soldiers. It is no longer realistic to encircle this agglomeration and force the garrison of the Armed Forces of Ukraine to surrender, after the “regrouping” of the RF Armed Forces in the Kharkov region took place and Balakleya, Izyum and Kupyansk were under the control of the enemy. In other words, all this will have to be fought back again and go far beyond the Donbass, carrying out a large-scale offensive operation to encircle the positions of the Armed Forces of Ukraine.

Secondly, even the liberation of Slavyansk will not be a panacea. The Seversky Donets River itself is shallow, and Dnieper water is used to fill it, pumped through the network of the energy-type canal Dnieper - Seversky Donets. Obviously, after the fall of the stronghold of the Armed Forces of Ukraine in the DPR, it will also be blocked and the problem with water supply will remain. It can be solved in the root only by further advancement of the RF Armed Forces towards the banks of the Dnieper, freeing the Dnepropetrovsk, Poltava and Kharkov regions.

That is, without the entire Left Bank, the Russian Donbass will end up in a dead end, similar to the one in which Crimea has been all the previous 8 years. Does the above mean that the correct conclusions have been drawn? Not at all!

Instead of making plans for the liberation of the Left-Bank Ukraine and access to the Dnieper, we are making plans for water from the Don River, explained the head of the DPR Denis Pushilin:

Particular attention was paid to the problem of water supply. A decision was made to build a conduit from the Don River. Despite the fact that the project is complex and expensive, its implementation is scheduled for the first half of 2023.
In some settlements of the DPR, water is currently supplied once every three days, and in some places even less often. This is due to the malfunction of utility networks in many places, as well as the slow pace of the liberation of the Seversky Donets-Donbass water canal from Ukrainian nationalists.
The project for the construction of a water pipeline in the DPR from the Rostov region was worked out by Donetsk back in 2017, but due to the Minsk agreements it was not implemented, and now it has suddenly become relevant. And, alas, there is nothing to rejoice here.

The problem is that Don himself suffers from low water. About how much the Great Russian River became shallow, we told in detail back in the peaceful last year. You can read more at link, and now we recall a few numbers. Not so long ago, the annual runoff of the Don was 22,3 cubic kilometers of water, but in 2020 it fell to 9,5. The salinity of the water at the mouth is already approaching the level in the Kerch Strait, the banks are turning into marshy salt marshes. The water level in the rivers Mius, Seversky Donets and Kalitva fell more than twice. The quality of fresh water itself has declined sharply, which causes numerous complaints from local residents.

Such a depressing state of the Don is influenced by many negative factors that need to be urgently addressed. But instead, the river waters are now planned to be pumped out and sent to the Donbass, which will only aggravate the situation. At the same time, they frankly say that all this will cost a lot. Super! Let's be clear: we don't feel sorry for the Don water for our own people in the DPR and LPR, but, probably, we need to solve the real problem with the Armed Forces of Ukraine and the Dnieper, instead of creating a new one out of the blue, no?
Reporterin Yandex News
Reporterin Yandex Zen
15 comments
Information
Dear reader, to leave comments on the publication, you must sign in.