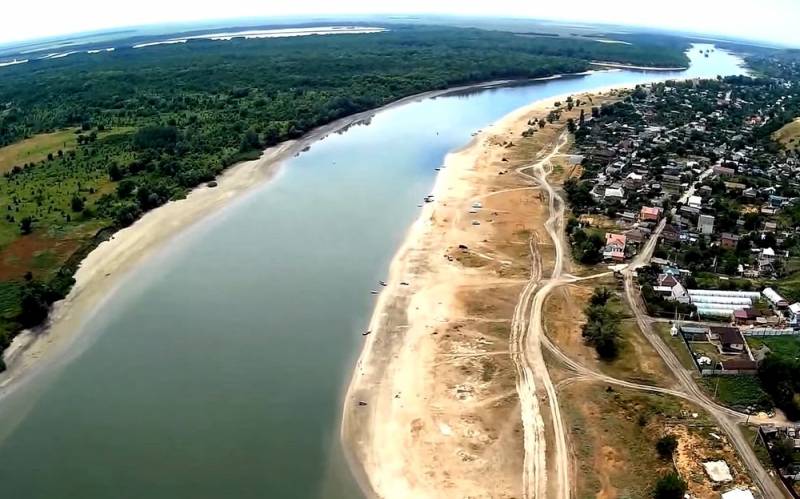 A while ago we told about the problems of the Ukrainian Dnieper, the water of which has essentially become toxic and dangerous for consumption without complex purification. Alas, this misfortune has not bypassed our Don, and the entire South of Russia, as well as Independent, is systematically moving towards a real ecological catastrophe. How did this happen, and can anything else be done to prevent the worst-case scenario?


First, here are some depressing facts. The salinity level of the shallow and almost enclosed Sea of ​​Azov, into which the Don flows, is practically equal to that of the Black Sea. To date, this figure is 15 ppm. The fish stocks of its water area have radically decreased: if 90 years ago the total catches were estimated at 400 thousand tons, now this is a very modest 11 thousand. Valuable species of fish and other marine life characteristic of the Azov water area are rapidly disappearing. Measurements show that the salinity level is increasing by 1 ppm per year. This is a lot, and the situation has only deteriorated from year to year for the last 15 years. What or who is to blame for the rapid change?

Of course, first of all, the eyes turn to the Don, the waters of which flow into the Sea of ​​Azov and naturally increase its freshness. And here the numbers are simply frightening: if earlier its annual runoff was 22,3 cubic kilometers of water, then in 2020 it dropped to 9,5. Also, the water level in the Mius, Seversky Donets and Kalitva rivers dropped by more than two times. At the mouth of the Don, salinity is now not much different from the water in the Kerch Strait. The banks along the lower reaches of the great river turn into swampy salt marshes. It smells bad, according to residents of Rostov-on-Don, tap water in the taps, and after washing, a thin coating of salts trapped in the river water remains on the dishes. And who is to blame for the impending environmental disaster? The Minister of Ecology and Natural Resources of the Rostov Region, Mikhail Fishkin, believes that global warming is to blame:

The state of nature is cyclical, so you need to be prepared for a possible drought and a possible increase in water masses.
Indeed, the factor of negative influence from global warming is difficult to deny, natural processes are indeed cyclical, and 12-14 thousand years ago the Sea of ​​Azov disappeared altogether. But, alas, these are not all the reasons for the problems of the Don and the Azov basin. Perhaps the greatest contribution to date has been made by anthropogenic activities.

At first, the construction of the Tsimlyansk reservoir and hydroelectric facilities had a very significant impact on the hydrological regime of the Don. During the construction and laying of roads, numerous flow communications were destroyed for the flow of water into the river - gullies and ravines. The natural self-regulation system has been hit hard. Because of this, the flood has decreased many times over, which naturally washed the Don bed every spring and provided the floodplain soil with moisture and nutrients. As a result of the creation of artificial reservoirs, reservoirs and ponds, the total evaporating surface has increased, which has a negative effect in the dry season. Rivers become shallow, their tributaries are gradually silted up and overgrown, and harmful substances accumulate in their bottom sediments. Accordingly, natural spawning grounds for fish are reduced, and their numbers are decreasing.

Secondly, a heavy blow to the Don was dealt by intensive agriculture, which requires huge volumes of water for irrigation. Against the background of the drought of recent years, farmers have to select increased volumes of it. At the same time, it is necessary to take into account the factor of soil erosion, which affects almost all agricultural lands of the Rostov region. The upper layers of soil with water and wind fall into the Don and aggravate the problem of siltation, which is most acute for small rivers. Well, of course, generously applied fertilizers and other chemicals contribute to environmental degradation.

Thirdly, numerous violations in water protection zones lead to pollution and siltation of the Don basin, such as the construction of cottages on the coastal protection belts, discharge of sewage into rivers, etc.

In addition to the environmental damage to the South of Russia, this region also faces significant economic damage. Here is how the head of the Federal Agency for Fishery Vasily Sokolov commented on this situation:

We see how the stocks of most valuable fish species are declining, habitual conditions are disrupted. Sivash and Taganrog Bay are saline, the same can be said about the central part of the sea - everywhere there are already peak values. If earlier the Sea of ​​Azov was considered one of the most productive reservoirs in the world, now it is degrading.
In general, it is obvious that things are bad. But is it still possible to save the great Russian river? Representatives of the expert community strongly recommend that a number of priority measures be taken.

It is necessary to make an inventory and draw up ecological passports for all small rivers, ponds and other hydraulic structures, many of which are simply abandoned. After that, it is necessary to eliminate those of them that no longer have economic significance, as well as to clear the river beds. To urgently start the restoration of water protection zones and coastal protection zones, green zones along the Don basin. It is also proposed to build a special spawning canal bypassing the Kochetovsky hydroelectric complex. Only after completing a set of such measures can one hope for a gradual improvement in the environmental situation. And we must be aware that this will not happen very quickly. But it was necessary to start the day before yesterday.
Reporterin Yandex News
Reporterin Yandex Zen
5 comments
Information
Dear reader, to leave comments on the publication, you must sign in.