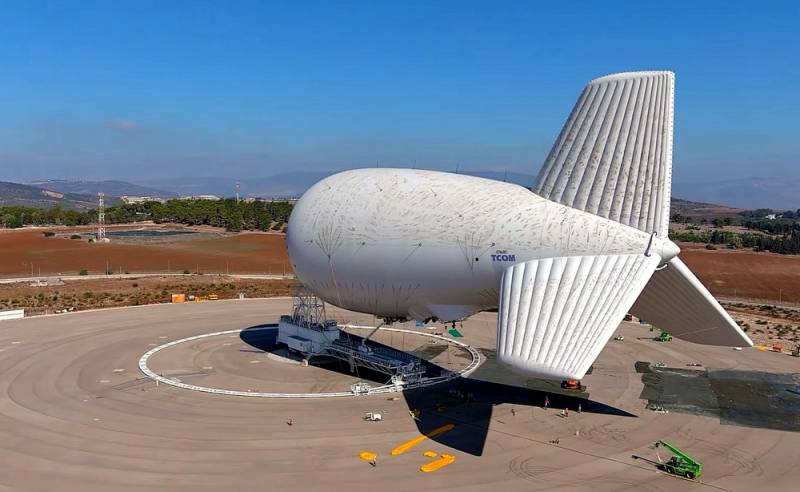 Despite the fact that the 21st century is already in the yard with its artificial intelligence and hypersonic speeds, which seemed hopelessly outdated Technology of the last century have now received a second youth. The United States is again turning to the subject of lighter-than-air aircraft to form its defensive lines. How will Russia respond to this?

A few days ago, the American publication Politico, citing its own sources in the military-industrial complex, reported that the Pentagon is again relying on high-altitude balloons as part of a missile defense system against Russian and, in the future, Chinese hypersonic weapons:

The new plan should allow to surpass competitors: Russia and China. High-altitude inflatable aircraft capable of moving at an altitude of 18 to 27 km can become part of a wide surveillance network and, in the future, can be used to track hypersonic weapons.
Tom Karako, head of missile defense programs at the International Center for Strategic and International Studies, spoke about the advantages of high-altitude balloons as a means of long-range radar reconnaissance and monitoring:

High-altitude or ultra-high-altitude systems have many advantages due to stability, maneuverability and the ability to carry multiple types of payloads at once.
Indeed, balloons and their variety - airships - have a lot of advantages, which we will discuss in detail told previously. Recall that we proposed to create specialized AWACS airships, manned and unmanned, which would allow the Ministry of Defense of the Russian Federation to continuously monitor everything that happens on the other side of the border with Ukraine, radically increasing the effectiveness of combat operations against the Armed Forces of Ukraine. The idea is quite sound, especially since Russia has a certain technological backlog.

Thus, the Dolgoprudny Design Bureau of Automation (DKBA) has already developed a multifunctional airship DP-3 with a carrying capacity of 3 tons, designed for two crew members. In addition, Russia has its own developments on the airship, which visually resembles a UFO "flying saucer". There would be a desire, and then to build an aircraft lighter than air, equipping it with reconnaissance equipment, possibly quite quickly. To make it clear what amounts we can talk about, let's look at the budget allocated by the Pentagon for strengthening missile defense with the help of high-altitude balloons. That's a "fantastic" $27,1 million! Not a billion!

And now let's move on to the question of the possibility of using airships for the needs of the Russian Navy. Surprisingly, but article with reasoning on this topic, received mostly negative comments from some of our readers, who, of course, know better. However, the issue is so serious that we will not allow it to be turned into a uniform farce by “trolling”. One of the complaints expressed was that if airships in the navy are so useful, then why is no one else doing them - neither the Americans, nor the Chinese, nor the Japanese. To answer this question, we must turn to history.

Airships were widely used during both world wars. In World War I, when manned aviation was at the very beginning of its development, these aircraft were used for long-range night bombardment of cities, as well as in reconnaissance and patrolling at sea. In World War II, airships were mainly used to escort sea convoys and guard against enemy submarines. Let us give a few figures: in the Atlantic Ocean, American naval airships escorted 71 ships; in the Pacific Ocean, 500 ships. Obviously, these low-speed aircraft could no longer be used as bombers over megacities, but over the vast expanses of the oceans they, with their huge flight range and the ability to hover in the air, are the place. In 11, the Pobeda naval airship was built in the USSR, which was actively used in the Black Sea as a minesweeper to search for and clear mines.

At one time, the Americans were especially able to appreciate these qualities of controlled balloons, who needed to be able to continuously control two oceans at once, the Atlantic and the Pacific. For the needs of the US Navy in the 20s of the last century, two sea airships ZR-1 and ZR-2 were built. Together with the Germans in 1923, the Goodear-Zeppelin Corporation was created, which developed the design of an airship-aircraft carrier. In all seriousness, the possibility was considered to replace conventional aircraft carriers with aircraft carriers carrying 3-6 aircraft each, which were supposed to protect them, conduct reconnaissance and combat operations. And, what is most interesting, they were actually built and operated!

These extraordinary aircraft were created as part of the "Project-60". Together with German engineers, the Americans were able to build two aircraft carriers - Akron and Macon, which could launch and receive several airborne aircraft on a special trapeze. And they really flew! There is a known case when a pilot took off from the deck of the aircraft carrier "Saratoga" and safely "landed" on the trapeze of the aircraft carrier.

So, what are the obvious advantages of a sea airship? This is a huge radius of action, a large carrying capacity, the ability to hover in the air, as well as a speed of movement that is several times higher than the speed of the ship. Also, as we see, airships can really be used as carriers of other aircraft.

Minuses? It is customary to attribute to them that relatively slow-moving airships are easy to shoot down, but there is some cunning in this counterargument. Problems arise only if explosive hydrogen is used instead of helium. At the same time, the design of the airship consists of many segments, and damage to the hull does not mean that it will burst like a balloon and collapse. On the contrary, the decline will occur gradually. Real disadvantages include dependence on dedicated infrastructure for service and weather. The loss of several American naval airships in the 20-30s of the last century occurred just because of falling into a strong storm. However, in the 21st century, weather control is not as critical a problem as it used to be.

Let us return to the question of the possibility of using airships for the needs of the Russian Navy. What are the real challenges they face?

Obviously, this should be reconnaissance, patrolling the sea borders, searching for and detecting potential enemy submarines, as well as air trawling of the water area, since Russia no longer has minesweeper helicopters. Technology has come a long way in the past century. Aircraft can be both manned and unmanned, both gigantic and relatively compact. Some of our readers were deliberately horrified by the idea of ​​placing a reconnaissance airship on the UDC project 23900, for some reason referring to the dimensions of the DP-3, which is 70 meters long. But did someone say that the deck version of the reconnaissance airship should be gigantic in size and must be manned?

Not at all. On the contrary, such aircraft should be unmanned, compact, assembled directly on the deck and refueled in the air through a special mooring mast. The UDC of project 23900, if its project is adapted accordingly, can be such a “mother ship” that controls a vast territory by sending several unmanned airships, AWACS and patrol, anti-submarine airships in different directions. There is no particular technological complexity in this, there would be a desire.

Theoretically, it is even possible to develop the American idea of ​​​​an aircraft carrier by replacing aircraft with UAVs. Such a huge rigid airship will be able to stay in the air for a long time, quickly move over vast distances, conduct long-range radar reconnaissance, send out reconnaissance and reconnaissance-strike drones, and act as a mobile command post. At sea, he could interact with UDC or other supply ships, refueling directly in the air.

So why are neither the Americans nor the Chinese involved in sea airships now? Because the US Navy has 12 carrier strike groups in all oceans except the Arctic, equipped with carrier-based AWACS aircraft, and the Pentagon also has a giant satellite constellation. China has created its own carrier-based AWACS aircraft and is building its fourth aircraft carrier. And what do Russia and the Russian Navy have to talk through their lips about maritime reconnaissance and patrol airships?
Reporterin Yandex News
Reporterin Yandex Zen
4 comments
Information
Dear reader, to leave comments on the publication, you must sign in.