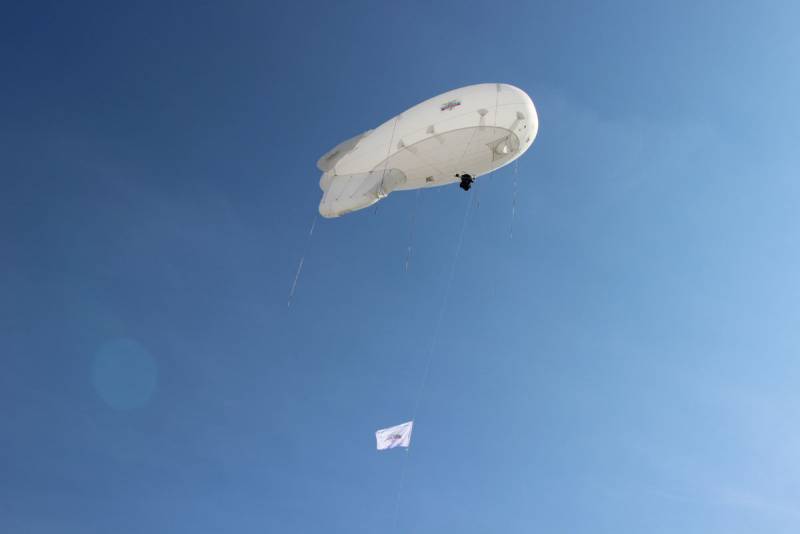 In 2020, two project 23900 universal landing ships were laid down at the Zaliv shipyard in Kerch. The Ivan Rogov and Mitrofan Moskalenko will become the first real helicopter carriers in the Russian Navy, which is undoubtedly a big step to strengthen it. However, after the dramatic events in the Black Sea, the author of these lines met with a flurry of criticism regarding the UDC as a class of ships, supposedly completely irrelevant in the era of coastal-based anti-ship missiles. Is it really?

This point of view is shared by the so-called aircraft carriers, people who are sincerely convinced that the time of large-capacity surface ships is long gone, which is allegedly confirmed by the death of the Moskva missile cruiser in the Black Sea. As an alternative, they propose to build exclusively small "mosquito fleet" boats, apparently to make them harder to hit with anti-ship missiles. The fact that there is a direct connection between the displacement of a warship and the number of offensive and strike weapons that can be crammed into its volume is completely ignored. Let it be.

Let's return to the universal landing ships, called by the supporters of this approach "useless huge tubs", which are easy to sink right from the shore with 1-2 anti-ship missiles. At best, they recognize for the UDC their role as a large floating hospital, a shipbuilding base and a command and control ship. Well, there is some truth in this.

Universal amphibious assault ships really appeared as a result of understanding the results of the Vietnam War, when the Americans had to operate within the radius of action of the coastal artillery of the Vietnamese patriots. It turned out that ships were needed that combined the functions of command ships, which made it possible to coordinate the landing of troops and control the battle, to deliver special forces to the coast by helicopters, and also by sea with the help of landing special equipment. Attack helicopters were supposed to support the landing, and subsequently the Marine Corps received its own F-35B short takeoff and vertical landing aircraft, which significantly increased their firepower.

What could Mitrofan Moskalenko do today, if he were to be the new flagship on the Black Sea? Would he allow himself to be ingloriously drowned by the Armed Forces of Ukraine in 1-2 anti-ship missiles, or would he help to make a successful landing near Odessa? The question is complex, and the answer to it would directly depend on the quality of command and planning.

Obviously, an almost unarmed UDC by itself cannot be used; it needs an appropriate escort of at least 2-3 modern frigates and corvettes. The only offensive armament of the amphibious assault ship is its air wing, but when landing, attack helicopters will only perform an auxiliary function. Before carrying out such an extremely dangerous operation, the entire coast must be turned into a lunar landscape by aviation, coastal or deck. In the case of Odessa, this can only be coastal aviation from the Crimean airfields. Only then should the UDC first send special forces in helicopters, then approach the coast at a distance of 25-30 kilometers and begin landing the expeditionary forces by sea. Attack helicopters, together with fighter aircraft, must constantly control the situation, dominating the air. Only after that would they be able to start unloading on the coast equipment conventional BDK by "sticking" their nose into the Black Sea beach.

This is what the Russian landing operation near Odessa should have looked like if it actually took place under ideal conditions. Even if the fleet command decided to limit itself to only simulating preparations for the landing, diverting significant forces of the Armed Forces of Ukraine, the UDC would still be of great use.

At first, "Mitrofan Moskalenko" could be used as a command and staff ship, conducting aerial reconnaissance with Ka-31 AWACS helicopters and coordinating the actions of the fleet, aviation and ground forces.

Secondly, there would definitely be a job for him as for a large floating hospital. One can only imagine how many lives could have been saved during the confrontation for Zmeiny Island or the drilling platforms of Chornomorneftegaz, if it were possible to quickly deliver the seriously wounded by helicopters directly to the operating room equipped with modern equipment.

So a universal landing ship would be useful in the Black Sea as well. If only he were there.

Surprisingly, some well-known supporters of the construction of an aircraft carrier fleet also took up arms against the helicopter carriers.

On the one hand, they admit that the UDC air wing significantly increases the combat capabilities of the ship formation in which it goes. The carrier-based AWACS Ka-31 helicopters are capable of conducting aerial reconnaissance and providing data for target designation to cruise missiles. Attack helicopters can sink small ships, characteristic of the "mosquito fleet", and with some modernization, even provide air defense by shooting down anti-ship missiles flying at ships. In the anti-submarine version, the helicopter carrier's air wing is capable of providing anti-aircraft defense cover, continuously searching for, detecting and destroying enemy submarines. All together it is worth a lot, military sailors will confirm.

On the other hand, when compared with a full-fledged aircraft carrier, the capabilities of the UDC are extremely limited. The absence of a catapult does not allow the use of a carrier-based AWACS aircraft, and the performance characteristics of the Ka-31 helicopter are very much inferior to it. The internal volume of the universal landing ship is given over to the tank deck, landing aids, cockpits for the command and battalion of marines, hospitals and more. The helicopter air wing performs precisely the auxiliary role. Even if your short takeoff and vertical landing fighters are on deck, such a light aircraft carrier will not be able to conduct a full-fledged air battle, the maximum is the function of fire support for strikes along the coast. A helicopter carrier can indeed reliably cover an entire area of ​​ASW, but in terms of mobility it is inferior to specialized anti-submarine aviation. 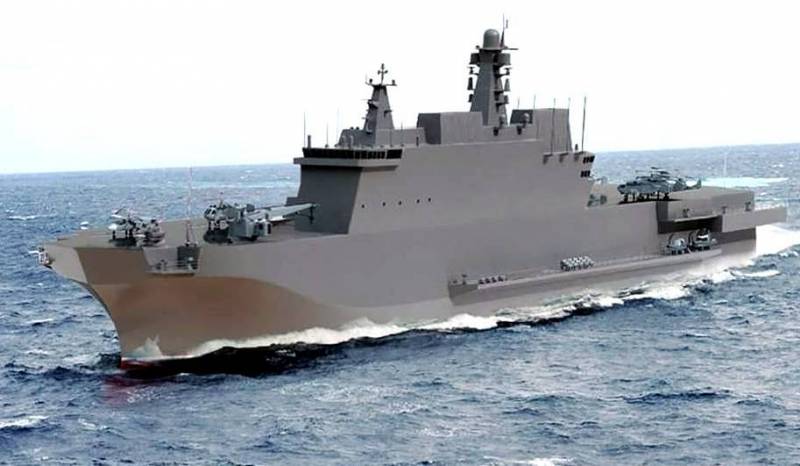 UDC of the 23900 project
The bottom line is that, contrary to all sorts of horror stories, the UDC is a very useful ship capable of performing a wide range of tasks and significantly increasing the capabilities of the navy. But is it possible to somehow increase them even more?

Without claiming to be the ultimate truth, I would like to make a few considerations regarding the expansion of the potential of universal landing ships. I was inspired to write this article idea creation of specialized AWACS airships and even air defense for the needs of the Russian army. But then why not create a deck airship for the Russian Navy?

One of the most serious problems of the Russian navy, the sailors will not let you lie, is reconnaissance and target designation. It is not enough to have powerful missiles on board, they still need to be aimed precisely at the target, and if it moves, and even at a speed of 30 knots? It is good to have a sea-based air defense system, but it is even better to see an anti-ship missile fired and flying low above the surface of the water in time and aim your anti-aircraft missiles at it.

In the US Navy, this problem is solved by carrier-based AWACS aircraft, which are launched from their heavy nuclear aircraft carriers using catapults. The Russian Navy does not have its own carrier-based AWACS aircraft, nor a full-fledged aircraft carrier with a catapult, with the exception of the half-dead TAVKR "Admiral Kuznetsov", equipped only with a take-off springboard on the nose. We also do not yet have AWACS drones, Ka-31 AWACS helicopters are not numerous and have limited performance characteristics compared to American AWACS aircraft. But why not develop an unmanned version of AWACS airships for the needs of the Russian Navy?

For example, the Dolgoprudnensky Design Bureau of Automation (DKBA) has already developed a multifunctional airship DP-3 with a carrying capacity of 3 tons. The volume of the shell is 12 cubic meters. m of helium, engine power - 000x2 l. s., maximum flight range - 420 km, maximum altitude (above sea level) - 3000 km, maximum speed - 3,0 km / h, maximum flight duration - 90 hours. The crew of the aircraft is 44,7 people. The project began as part of a defense order, on its basis a whole family of airships of various sizes and purposes can be created - a high-altitude patrol, a rescue platform, a flying laboratory-medical unit, a mobile refrigerator, delivery of shift teams to remote fields, geo-prospecting and so on.

For example, it can be a carrier-based AWACS airship in an unmanned version, based on the UDC. Depending on the design, these aircraft are soft, semi-rigid and rigid. Under the requirements of the customer, prefabricated semi-rigid airships can be developed, filled with helium directly on the ship and taking off from the deck of a helicopter carrier. Such an UAV is capable of staying in the air for a long time, much longer than an AWACS aircraft and even more so a helicopter, and conducting reconnaissance. If a special mooring mast on the superstructure-island is provided on the landing ship, then the unmanned airship can periodically dock to it and replenish the supply of fuel and electricity. If necessary, they can be landed on the deck, maintained or disassembled.

As an option, it is possible to create unmanned airships in an anti-submarine version, which will carry special buoys, search equipment and strike weapons against submarines. In this mode, from one UDC, several airships can be launched and continuously operated at once - AWACS and PLO. With such an updated air wing, the helicopter carrier will radically increase its combat capabilities, eliminating many problems with aerial reconnaissance and target designation, as well as allowing control over vast water areas.
Reporterin Yandex News
Reporterin Yandex Zen
10 comments
Information
Dear reader, to leave comments on the publication, you must sign in.