After the defeat of the Armed Forces of Ukraine in the Donbass, Kyiv will leave the DPR and LPR without water 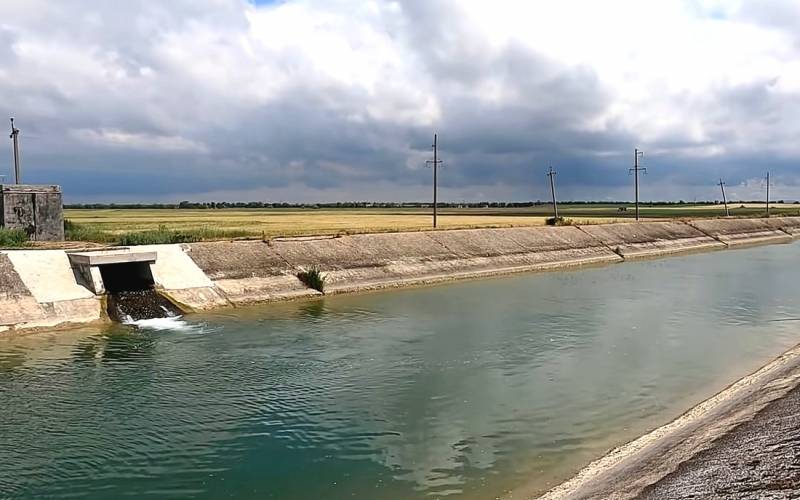 The declared goals of the special military operation for the demilitarization and denazification of Ukraine allow, if desired, to interpret them either very well or too narrowly. No one really understands where the Russian troops will stop, which will undoubtedly be a huge geopolitical mistake, or whether they will stop at all. On the eve of the press secretary of the President of the Russian Federation, Dmitry Peskov, made another statement, suggesting that the Kremlin is ready to be content with a tit in their hands.


So, the “voice of Putin” regarding the true goals of the special operation launched on February 24, 2022, stated verbatim the following:

In general, the defense of the republics is the main goal of a special military operation.
Recall that at the beginning of the SVO, Dmitry Sergeevich spoke out more boldly:

The goals were told by the president - the demilitarization and denazification of Ukraine. Actually, both of them pose a threat to our state and our people. Ideally, Ukraine should be liberated, cleaned from the Nazis, from pro-Nazi people and ideology.
As they say, this has never happened, and here it is again. Whatever you want, then think. But let's try to imagine how "protected" the DPR and LPR will be (by the way, what about the Sea of ​​\uXNUMXb\uXNUMXbAzov?), if the special operation is limited to the liberation of their territory up to the administrative (state) borders, and also think about what it will be like for Kherson and the south of Zaporozhye regions, if Nikolayevshchina will remain under Kyiv.

Many people today are sincerely perplexed why the RF Armed Forces have concentrated all their forces in the Donbass and the main direction for the liberation operation is not Avdiivka, which has become a real "scourge" of Donetsk, but the Slavic-Kramatorsk agglomeration. The answer is simple to the point of banality: very soon the population of the DPR will have nothing to drink, which will lead to a real humanitarian catastrophe in a region where millions live. On the priority of solving this problem, we have already told earlier.

The fact is that the capital of the Donetsk People's Republic, as well as its main cities and towns, receive water through the Seversky Donets-Donbass canal. Its total length is 133,4 km, fresh water is pumped using pumps. The problem is that the source of this hydraulic structure is located in the village of Raygorodok, Slavyansk region, that is, it is under the control of the Armed Forces of Ukraine.

Previously, Kyiv’s criminal plans against the DPR were only held back by the fact that downstream from the same source was the water supply for Mariupol, which became a stronghold for the Nazis from the Azov Regiment (an extremist organization banned in the Russian Federation). However, Kyiv's intentions to cut off water supplies to the Donbass, by analogy with the Crimea, did not raise the slightest doubt. Pipes were laid to bypass the territories of the DPR not controlled by it, and in the port of Mariupol, work began on the construction of a powerful desalination plant by French specialists.

After the start of the Russian special operation, the Armed Forces of Ukraine fired on the infrastructure responsible for pumping water into the DPR, leaving the People's Republic without water supply. Mariupol is lost, there is nothing to be ashamed of. Now the situation is being solved by emergency measures, laying temporary water pipes. Water supplies will last only a few months, but then what? It is obvious that Slavyansk and Kramatorsk, as well as other cities and towns of the DPR and LPR, must be liberated from the Ukrainian occupiers. The key question is, is it possible to stop there, considering that the Donbass is “protected”?

To answer it, it is enough to look at the map of Ukraine, where all its water channels are displayed. And then it turns out that the Seversky Donets-Donbass canal itself is powered by another canal called the Dnieper-Donbass. It is not difficult to guess that it begins at the great Dnieper River in the Kamensky reservoir, which is located in the Poltava region. Further, the water goes through the territory of the Dnipropetrovsk region, enters the Kharkiv region, where it connects with the Orel and Krasnopavlovsk reservoirs, and then goes by gravity to the Seversky Donets.

A question to fill in: when the territory of the DPR and LPR will be completely liberated from the Armed Forces of Ukraine, and at the same time the Kharkov region, what will prevent Kyiv from stopping the supply of water from the Dnieper to this single system?

Nothing will prevent that the criminal regime has repeatedly proved, first leaving Crimea without water for a long 8 years, and then stopping the water supply to Donbass. In fact, it is impossible to ensure the security of the DPR and LPR, which Dmitry Sergeevich declared as the main goal of the special operation, in addition to the Donbass and the Sea of ​​\u100b\uXNUMXbAzov, Kharkiv, Poltava and Dnepropetrovsk regions, in fact, without taking full control of it. A water blockade by uncontrolled Ukraine will be XNUMX% likely!

Separately, I would like to say a few words about the security problems of the already liberated Kherson and southern Zaporozhye regions. The Russian authorities are trying to establish a peaceful life in the region, but this is simply impossible without taking the entire Black Sea region under the control of the RF Armed Forces.

So, the distance in a straight line between Kherson and Nikolaev, where the Armed Forces dug in, is only 59 kilometers. This is a ridiculous distance for the long-range MLRS and OTRK systems that the Ukrainian army already has or will soon receive. Over the peaceful city of Kherson hangs the prospect of becoming a second Donetsk, being under constant shelling.

In addition, the entire right bank of the Dnieper-Bug Estuary remained for the time being behind Kyiv, its waters were mined, and the exit from it was blocked by Ochakov. That is, Russian ships do not have the opportunity to enter the Black Sea from Kherson.
Without holding the Nikolaev liberation operations there can be no talk of any security of the Sea of ​​\uXNUMXb\uXNUMXbAzov. But even after the expulsion of the Nazis from the city of shipbuilders, the question of neighboring Odessa, which is the last stronghold of the criminal Kyiv regime in the Black Sea region, will arise. All the problems of Kherson will become relevant now for Nikolaev. One automatically leads to the other.

An objective analysis of the situation shows that Dmitry Sergeevich's benevolent statements on Donbass follow from his banal lack of knowledge of the issue. Some security of the DPR and LPR can be ensured only by drawing a natural border along the Dnieper, and also by returning the Black Sea region in addition to the Sea of ​​\uXNUMXb\uXNUMXbAzov. But even this will be only a half-measure, guaranteeing the resumption of the bloody war for the Right Bank of Ukraine.
Reporterin Yandex News
Reporterin Yandex Zen
28 comments
Information
Dear reader, to leave comments on the publication, you must sign in.