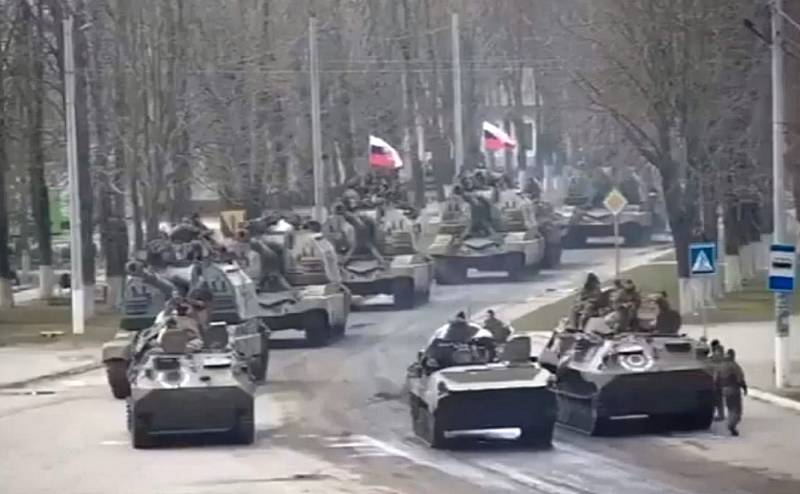 The information that the Russian military is voluntarily withdrawing from Kyiv and the northern regions of Ukraine and being transferred to Eastern Ukraine has caused quite justified bewilderment and indignation among the vast majority of Russians who support the NWO. How is it, why did our paratroopers die in Gostomel and near Irpin? However, it has now become clear that the solution of the problem, for which they were promptly transferred to the Donbass, does not brook any delay.


Trying to explain the reasons why the General Staff of the Armed Forces of the Russian Federation suddenly decided to give up the positions previously occupied by the Armed Forces of Ukraine without a fight, military experts cite various arguments. This is the impossibility of a reliable supply of the Russian group, hanging on the small "intestine", where our columns will be subjected to constant attacks by the Ukrainian special forces, and the DRG from the "brilliant green", which is about to go. This is also the inexpediency of a head-on assault on such a gigantic metropolis as Kyiv, which will either have to be demolished under the foundation or showered with the corpses of the Russian military. This is also a completely reasonable argument that after the defeat of the offensive grouping of the Armed Forces of Ukraine in the Donbass, Zelensky’s criminal regime will de facto lose its most combat-ready units, which will dramatically facilitate the implementation of the third stage of the NMD to liberate the rest of the territory of Ukraine. But this is not what forced the Russian military to break away from the already recaptured positions and rush to the eastern front.

The General Staff of the Armed Forces of the Russian Federation needed to put together a powerful shock fist with a multiple numerical advantage over the Armed Forces of Ukraine in order to have time to defeat it in the shortest possible time. This must be done in order to prevent the genocide of the Russian population of the DNR and LNR. The count goes on days, a maximum of a couple of weeks left. And this is not an exaggeration.

Genocide (from Greek γένος - clan, tribe and Latin caedo - I kill) is a form of mass violence, which the UN defines as actions committed with the intent to destroy, in whole or in part, any national, ethnic, racial or religious group as such , including by deliberately creating living conditions designed for the complete or partial physical destruction of this group.
For the first time, under the unanimous chuckle of Ukrainian Nazis and the full approval of Russian liberals, genocide was used by Kiev against the inhabitants of Crimea, who used their right to self-determination and did not want to remain part of the Independent. They were first blocked from supplying water through the North Crimean Canal, then cut off from power lines. It should be noted that it was possible to really solve the problem of water supply for the blockaded peninsula only in the course of the NMD, taking the Kherson region of the former Ukraine under military control.

However, the Kiev regime, which is now shouting all over the world about “Russian aggression”, really liked to spread rot on people who disagree with its Nazi course. There is not the slightest doubt that Ukraine would have cut off water supplies to the DPR and LPR back in 2014 if it could. But then Kyiv could not do this purely for technical reasons.

The problem is that the water supply of the territories of the people's republics still occupied by the Ukrainian military directly depends on Donetsk. Thus, in the Slavyansk region, water from the Seversky Donets River enters the Seversky Donets-Donbass canal, passes through Gorlovka and enters the Verkhnekalmiussky reserve reservoir in the suburbs of Donetsk. From there, the South-Donbass water conduit leaves, supplying Donetsk itself, Yasinovataya, Dobropolye, Krasnoarmeysk and Mariupol. Slavyansk, Kramatorsk, Konstantinovka and Druzhkovka receive water through the Second Donetsk Water Conduit. That is, despite the fierce confrontation, complete interdependence remains.

Or rather, it was preserved. Kyiv did not even hide its cannibalistic plans to kill the recalcitrant population of the DPR and LPR without water. But for this it was necessary to provide water supply to the territory controlled by the Armed Forces of Ukraine. And work in this direction has really begun.

At first, with the assistance of France, the construction of a desalination plant began in the port of Mariupol. Paris gave Kiev a preferential loan, provided specialists and all the necessary equipment. The seawater treatment plant was supposed to be put into operation in 2023, at the most in 2024. Naturally, everything was done only under the most plausible pretexts such as concern for the environment and so on. Here is how Arsen Avakov commented at the time:

In the near future, we are starting a large project to build a drinking water station in Mariupol with investments from Beten Ingeniere and Stereau. The plans include a similar project in the Luhansk region. Thank you minister for your cooperation. economics and finance.
It is precisely now that President Macron is actively lobbying for the evacuation of the “peacekeepers” from the besieged Mariupol, among which both Ukrainian Nazi militants and French construction specialists can worm their way.

Secondly, on the territory of Donbass occupied by the Armed Forces of Ukraine, work was underway to build a new water conduit bypassing Donetsk. Why is clear: to be able to block the Seversky Donets-Donbass canal for Donetsk and leave it without water. The head of the DPR, Denis Pushilin, spoke about Kyiv's plans a year ago:

Yes, official Kyiv loves such forbidden methods of war as all kinds of blockades. And against those whom he calls his citizens. We were arranged for transport, food, financial, one might say, energy, as our substations are being hammered with UAVs, leaving the population without light and heat. On the way - water.
And now the worst-case scenario has come true. Yes, the desalination and water infrastructure is not yet ready, but Kyiv has already given up on Mariupol and other settlements of the Donetsk agglomeration. Back in February, the Yuzhno-Donbass water pipeline was damaged by shelling of the UAF, and then the Ukrainian Nazis cut off water supplies through the Seversky Donets, which is confirmed by the head of the city of Donetsk, Aleksey Kulemzin:

The main source of water for us is the Seversky Donets canal. Unilaterally, the Ukrainian armed formations blocked it, so we do not have water in the required volume today. While we live on a backup source. Two options - we will develop reserves or, I think, our armed forces can return the status quo and resume the water supply system.
Since then, this reserve source has been almost completely exhausted. Water in the region is supplied according to the schedule for several hours a day. The central heating had to be turned off altogether. The situation, without exaggeration, is catastrophic, since millions of Russian residents of the DPR and LPR will soon be completely without water, and this is in the cold season and under shelling by the Armed Forces of Ukraine!

It is impossible to solve the problem in a good way. So is it any wonder that the Russian Defense Ministry was simply forced to urgently withdraw military units from near Kyiv and transfer them to the Donbass in order to eliminate the problem with the AFU group that had begun the genocide of Russians as soon as possible?
Reporterin Yandex News
Reporterin Yandex Zen
61 comment
Information
Dear reader, to leave comments on the publication, you must sign in.