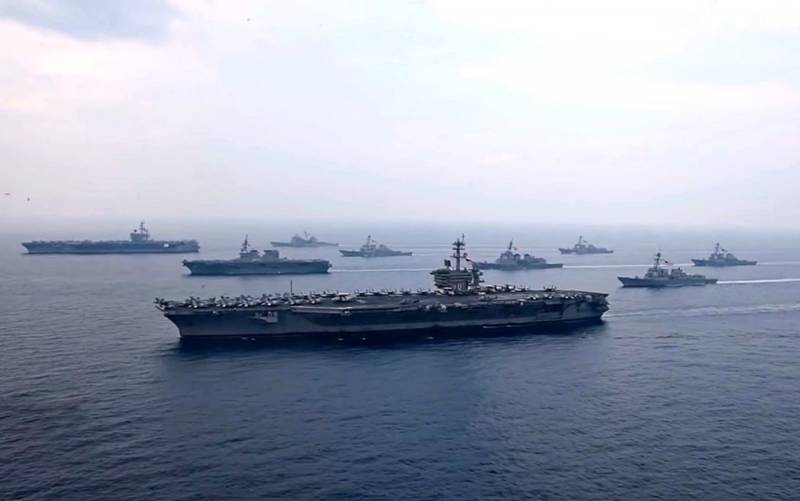 In just a few days, the intrigue will be resolved, what exactly is hidden there under the black case at the MAKS-2021 air show: a light single-engine fighter or an upgraded version of the Yak-141 vertical takeoff and landing (VTOL) aircraft, the need to revive which was announced several years ago by Deputy Prime Minister Yuri Borisov. And it would be very cool if a supersonic vertical takeoff and landing fighter was hiding under the curtain. Despite the fact that in certain circles this aircraft is considered almost the most useless, this is not entirely true, and in the case of Russia, the VTOL aircraft can almost make a revolution. Of course, this is an exaggeration, but the revived Yak-141 will solve several very important tasks.


At first, The RF Ministry of Defense can get a multi-purpose all-weather supersonic fighter capable of taking off and landing without a specially prepared runway. This can play a role if the runways are destroyed by preemptive strikes in the event of an armed conflict. We in Russia, alas, are no strangers to a dastardly war without a declaration. Obviously, the military aerodromes of the Aerospace Forces will be among the first targets for the NATO bloc and any other enemy, and without the runways smashed by the Tomahawks, our pilots will be able to count only on the highways, which, naturally, will be packed with cars scared to death. people. The presence of "vertical" as an unpretentious front-line fighter will allow to a certain extent to neutralize the consequences of such a disarming missile strike.

Secondly, the emergence of VTOL aircraft will solve the problems of not only the army, but also the navy. For many years, there have been fierce discussions about whether Russia needs aircraft carriers. The experience of World War II and subsequent armed conflicts with the participation of the US Navy has convincingly proved that powerful aviation is an absolute prerequisite for victory at sea. This was well understood by the Soviet admirals, who consistently developed the theme of aircraft-carrying ships, starting with helicopter carriers of the "Condor" class, then moving on to the TAVRK series. If the collapse of the USSR had not occurred, our fleet by now would have had at once four nuclear-powered aircraft carriers of the Ulyanovsk class, which were ordered by the Navy and were quite competitive with the American Nimitz.

For this reason, the fierce arguments against aircraft carriers for the modern Russian Federation are either a consequence of a lack of understanding of the essence of the issue, or outright sabotage. Yes, there are a lot of problems with building berths, with coastal infrastructure for aircraft carriers, with a lack of experience among deck-based aviation pilots, with funding, that's all. But this does not negate the main message: aircraft carriers, or rather aircraft-carrying ships, are needed by the Russian Navy, and how. The only question is what exactly they should be. And then in the comments, some kind of "woman's tantrums" begin: either give them a heavy nuclear aircraft carrier for 100 thousand tons, like "Nimitz", or better, "Gerald Ford", or none at all! Like, we can handle it with anti-ship missiles alone. Yeah, we'll handle it. The fact that a potential adversary in the person of the US Navy has its own anti-ship and cruise missiles, and in addition to them, an effective carrier-based aircraft, is somehow overlooked. We will fight a lot here at sea, in case of it ...

At this point, let's clarify. Yes, Russia is a great land power, and we certainly do not foresee air battles for atolls in the Pacific Ocean. But somewhere in the depths of the oceans, American nuclear submarines are floating right now, whose ICBMs with nuclear warheads are aimed at our cities. The Russian Navy should be able to catch them even far from its shores, for which, in fact, they began to build the first series of helicopter-carrying cruisers of the Condor project. Events in Syria showed that Russia could at any moment find itself drawn into a war across the three seas, which requires a strong navy and supply fleet. Who knows, perhaps in the foreseeable future we will have to somehow "designate our presence" somewhere overseas, for example, in Venezuela, to support a friendly regime. Recent events with the destroyer Defender have shown that the Russian Aerospace Forces and the Russian Navy have a real prospect of colliding with the AUG of the British Navy. God knows what other challenges we face, in which our small surface fleet may be involved, while the potential enemy in the person of the Anglo-Saxons has its own carrier-based aircraft and experience in its use, and we, so smart, do not need aircraft carriers for nothing. Or are they still needed?

Of course we do. We already reasoned on this topic, concluding that the optimal solution would be the construction of a series of 2-3 light non-nuclear aircraft carriers with a displacement of 40-45 thousand tons and an air wing of 40 carrier-based aircraft, one for the Northern Fleet for reinforcement to the "Admiral Kuznetsov" and two for the Pacific ... And then the "aircraft carrier" exclaim: well, what can these few light aircraft carriers do against a dozen heavy "Nimitz" and even more so "Gerald Ford"! So they will hide near our own shores, afraid to go out into the ocean in the event of a war.

However, this is not quite the correct argument. Firstly, this dozen and a half American AUGs are dispersed throughout the World Ocean, so at the same time all of them will definitely not oppose the Northern or Pacific Fleets of the Russian Federation. Secondly, the tasks of the Russian aircraft carriers will definitely not include duels with the Nimitz, they will only need air and anti-submarine cover for their own ship formation, for which 40 fighters will be quite enough, and if we are talking about two light aircraft carriers, then this is already 80, that is, more than standard on one "Nimitz". Thirdly, with a rational approach, the RF Ministry of Defense has the ability to quickly increase the number of its naval aviation in a specific theater of operations.

So we are smoothly returning from "unnecessary" aircraft carriers to "unnecessary" VTOL aircraft. Yes, in terms of its performance characteristics, the "vertical" is somewhat inferior to the usual horizontal take-off aircraft, but its colossal advantage is the ability to take off and land on almost any patch. He does not need any catapults, aerofinishers and other pribluda. The VTOL aircraft transforms virtually any barge with a straight deck into an aircraft carrier. In the last article, we in detail told about the American-British program ARAPAHO, which allows literally in a week and a half to turn any large dry cargo ship into a light escort aircraft carrier. For this, special container-type modules have been prepared in advance, where hangars, fuel tanks, ammunition storage, crew quarters, etc. are located. They are simply loaded onto a civilian ship according to a predetermined program, essentially turning it into a makeshift warship. The British thus converted and actively used three dry cargo ships at once under their VTOL "Harrier" during the Falklands War. Moreover, the United Kingdom eventually managed to achieve victory precisely because the British were able to concentrate a large number of military aviation in a remote theater of operations, ensuring their dominance in the air. And all this without a prearranged military base in South America!

This successful experience of the Anglo-Saxons could well have served Russia a useful service. The development of its own analogue of the ARAPAKHO program will allow, in the presence of a VTOL aircraft, to quickly increase the number and quality of the naval strike forces. Let's say that we are planning some next conflict across the three seas, where we will be involved directly or indirectly, and we need to support our ally in the region. It is possible to promptly call the required number of large dry cargo vessels from the reserve and place on each of them two dozen "vertical units", as well as load them with fuel and ammunition. Five improvised aircraft carriers in addition to full-fledged warships - this is already a hundred fighters of naval aviation. But this is not all of our potential capabilities.

Let's remember the Caliber-K project, which is a missile strike system, placed optionally inside 20- and 40-foot containers. They can accommodate both the 3M-54KE, 3M-54KE1, Kh-35UE anti-ship missiles and the 3M-14KE, Kh-35UE anti-ship missiles. One container contains up to 4 missiles. There are options with the placement in containers of cruise missiles "Caliber", perhaps, it will be deemed appropriate to use them as carriers for hypersonic "Zircons". The large dimensions of the hull of the dry cargo ship will also make it possible to place a powerful sonar system on it, making a submarine hunter out of a "mobilized" civilian vessel. 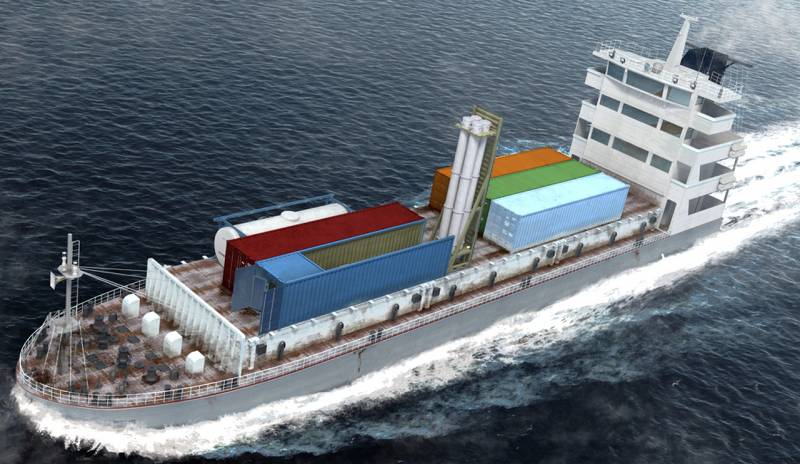 It sounds rather unusual, but nothing is impossible in such a project. De facto, due to the placement of the "Caliber-K" and VTOL aircraft complexes on an ordinary dry cargo ship, it turns into an aircraft-carrying missile cruiser, no matter how ridiculous it may sound. Yes, he is very, very far from a real TAVRK or BOD in terms of basic indicators, but he can, if necessary, shoot at targets with "Caliber", "listen" to the underwater strata and serve as a carrier for VTOL carrier-based aircraft. Naturally, not autonomously, but only as escort aircraft carriers and under the protection of full-fledged warships with powerful anti-submarine and anti-aircraft protection.

Let's summarize some of the results. The development of a domestic analogue of the ARAPAKO program and a VTOL fighter will enable the Russian Ministry of Defense to mobilize and arm large civilian ships with "military containers" literally within a couple of weeks, quickly increasing the aircraft carrier and strike group of the Navy in the required theater of operations. Depending on the number of "vertical" and "Caliber-K" containers, we will be able to achieve, if not superiority in the air and in the number of cruise and anti-ship missiles over a potential enemy, then at least reach comparable values, which can have a positive effect on the peaceful settlement of the conflict ... After its completion, "combat containers" can be returned to the warehouses of the Ministry of Defense, and dry cargo ships can be "demobilized". Imagine how much more economical it can be than building and then maintaining a dozen heavy nuclear aircraft carriers and under a hundred strike destroyers and cruisers. Let us clarify that we in no way suggest abandoning a real military fleet, but its analogue ARAPAKHO and the presence of the "Red Banner container-carrying auxiliary fleet" under certain conditions can become a very effective and budgetary asymmetric response to the total dominance of the US Navy in the World Ocean.
Ctrl Enter
Noticed oshЫbku Highlight text and press. Ctrl + Enter
We are
With the return of the Yak-141, an escort aircraft carrier becomes relevant for the Russian Navy
New weapons on the way: What is known about the anti-satellite complex "Burevestnik"
Reporterin Yandex News
Read Reporterin Google News
57 comments
Information
Dear reader, to leave comments on the publication, you must sign in.