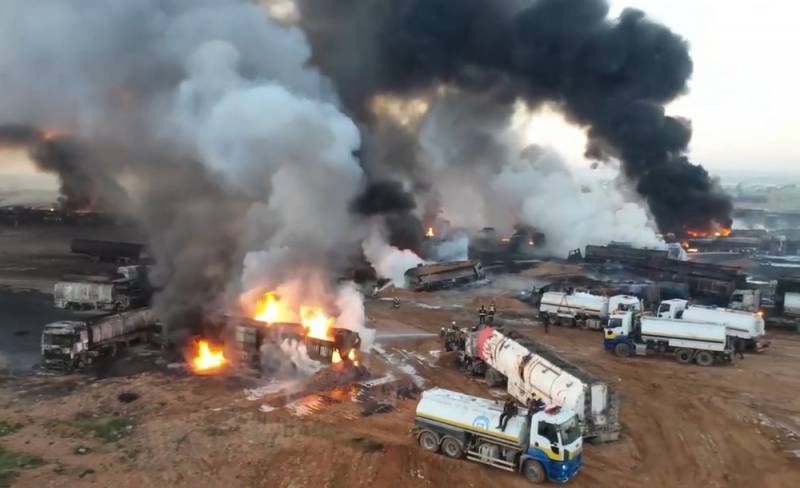 Curious things are happening now in Syria. The seemingly subdued armed conflict threatens to flare up again with even greater force. What is this, local squabbles, preparation of the Syrians for a military revenge in the north of the country with the Turks, or an echo of another, more distant war?


So, three days ago, in the province of Aleppo, which is under the control of pro-Turkish militants, there was a powerful missile strike from the territory of government forces and their allies. As a result were destroyed Refineries, storage facilities with oil products and tank trucks loaded with them. This kind of "logistics center" suffered enormous damage, killing dozens of militants. We deliberately put it in quotation marks, because through such points various extremist groups are exporting oil and its refined products stolen from the Syrian people to neighboring Turkey. They leave some for their own terrorist needs, the rest goes as illegal income to the Turkish side.

The next thing is the most interesting. According to some reports, this "logistics center" was destroyed by the strike of the 9K79-1 "Tochka-U" OTRK, which is in service with the Syrian government forces. But according to other sources, it was blown to shreds by the Russian Iskander-M OTRK, striking from the territory of the Khmeimim airbase in Latakia from a distance of 250 kilometers. The Sohr news agency reports that a reconnaissance drone circled in the sky shortly before the attack. If it really was Russian, then the strike scheme looked like this: the intelligence from the UAV was transmitted to the 9S920 information preparation point (PPI), which calculated the flight mission for the missile, then the signal was sent to the 9S552 command and staff vehicles (KShM), division commanders and batteries and finally the launcher. And after a while, the "logistics center" briefly turned into a fiery hell.


The intrigue is who really struck this blow, the Syrians or the Russians. The motives of the government army are clear: Damascus is eager to regain control of the Turkish-occupied territories of Aleppo and northern Idlib, knocking out the terrorists from there. The Syrian army has been preparing for revenge for a year now, gradually pulling its forces to the line of demarcation. The destruction of an oil refinery and warehouses with fuels and lubricants fits well into this scheme. The pro-Turkish militants are armed with a heavy technique, in particular, the T-55 and BMP-1 tanks. They also have tracked ACV-15 armored personnel carriers and Turkish-made M113 armored personnel carriers, apparently carefully provided by sponsors from Ankara. Since there is no fuel, then there will be nothing to fill them with. It is possible that Damascus could launch a military operation in the foreseeable future.

But there is one more explanation that fits well with the use of Iskander-M OTRK from Khmeimim. No, no one is going to prove anything to Armenian Prime Minister Nikol Pashinyan and other doubters. It is quite possible that this is how Moscow conveyed "warm greetings" directly to Ankara. Let's take a look at the general geopolitical context. Turkey actively helped Azerbaijan in just a month and a half to forcefully cut the "Gordian knot" of the long-standing territorial conflict with Armenia over Nagorno-Karabakh. In return, Ankara received direct land access to the Caspian and further, to the region of Central Asia, where it can directly compete with the interests of Russia. But Turkish ambitions are not limited to this.

President Erdogan has also become very active in the Ukrainian direction. In particular, Ankara seeks to squeeze the maximum out of Kiev in the field of aviation technology, jointly creating engines, explained Haluk Bayraktar, the executive director of the Turkish company Baykar:

It can be realized through the creation of a joint Turkish-Ukrainian enterprise for the production of aircraft engines. By joining forces, we can truly have the best turboprop and turbojet engines in the world.
Baykar Makina and Ukrspetsexport have agreed to establish a joint venture "Black Sea Shield", which is supposed to produce Bayraktar UAVs for the needs of Nezalezhny itself and for export. There are plans to develop a joint heavy drone with a take-off weight of 5,5 tons and an AI-25TL turbojet engine produced by the Ivchenko-Progress Zaporozhye enterprise. In other words, Ankara hopes to bypass Western restrictions at the expense of Ukrainian technologies. In addition to future joint projects, Kiev purchased a trial batch of 2018 Turkish Bayraktars with 6 missiles back in 200. At the end of 2020, the Ukrainian Armed Forces purchased 12 more complexes with 4 shock drones in each. Obviously, Ukraine admired their capabilities demonstrated in Nagorno-Karabakh. In addition, Turkey has transferred technology to Independent to build corvettes for its navy, which is to build up its capabilities in the Black Sea basin.

All this activity of Ankara falls on the current escalation of the conflict in Donbass, about which we in detail told earlier. It is highly likely that Kiev may try to repeat the "Karabakh scenario" against the DPR and LPR, using Turkish UAVs against the armored vehicles of the People's Militia of both unrecognized republics. Also in the press, you can find a mention that Turkish military experts advise the Ukrainian military on options for conducting an operation against Donbass.

All this cannot suit Moscow, which acts as a defender of Donetsk and Lugansk. In this context, the Iskander-M missile strike on pro-Turkish militants in Syria may be a hint that Russia will answer Turkey for its participation in the events in the Donbas with an offensive by the government army in northern Idlib. At the same time, the Turkish pocket was slightly hit. In theory, something similar should have been done during the war in Nagorno-Karabakh. But better late than never.
Ctrl Enter
Noticed oshЫbku Highlight text and press. Ctrl + Enter
We are
"We must beat first": the geopolitical alignment around Russia is continuously deteriorating
Ten "defeats" of Putin
Reporterin Yandex News
Read Reporterin Google News
33 comments
Information
Dear reader, to leave comments on the publication, you must sign in.