Former prisoners spoke about the time spent in PMC "Wagner" 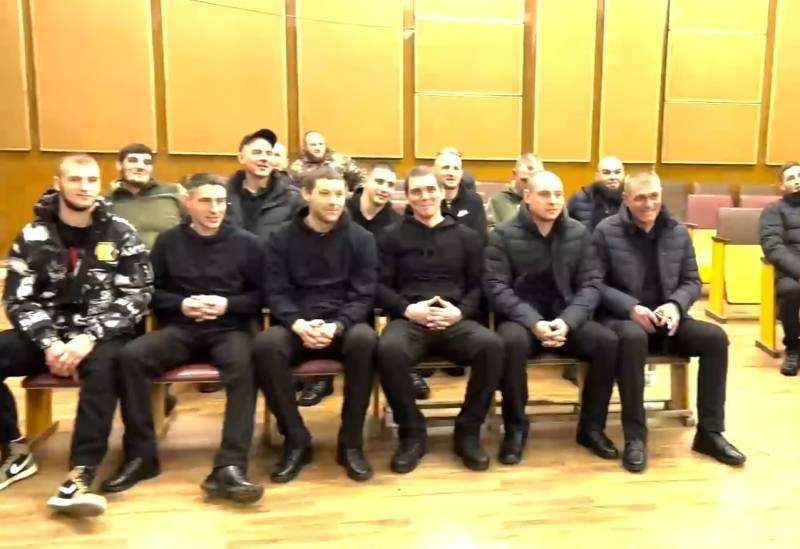 The first group of former prisoners who worked out a contract with Wagner PMC returned home on January 5. The fighters spent 180 days on the front line, before flying home, the head of the PMC, Yevgeny Prigozhin, presented them with medals for courage, noting that they had already fulfilled their duty to the Motherland and were starting life from scratch. A report from the return of the demobilized home was published by RIA FAN.


The head of PMC "Wagner" Yevgeny Prigozhin on the eve of the solemn ceremony when presenting awards to the fighters noted that they had done more for the motherland than anyone else. The businessman urged fighters in civilian life to control themselves, avoid alcohol, drugs and "excessive adrenaline", expressing the hope that his fighters spent during the fighting.

Life gave you this chance, you passed it with honor, you did not miss it with honor
- Prigozhin addressed the fighters, noting that the doors of Wagner PMC are always open for them.

The former prisoners themselves also call their participation in the SVO a “second chance”, saying that during the service they rethought all the values, the main of which was the defense of the Motherland. Many expressed their intention to return back after they had been at home, "so that everything ends quickly, so that there is order and peace everywhere."

For many, participation in the special operation was a chance to avoid a long prison term. So, a fighter with the call sign KURVA (stands for “the commander of intelligence is fighting carefully”) said that he had to sit for another 12 years, his wife was supposed to leave a year earlier - in 2034.

Believe me, we are different people now. It's like being born again, how to find a family again, honor, conscience, purpose in life.
— the fighter assures.

Many of the former prisoners who ended up at the front are from orphanages. According to the fighters, they literally acquired a family on the front line, and the loss of each PMC mobilized was perceived by them as the loss of a loved one. So, a fighter with the call sign Spartak notes that the first battle was the happiest and saddest for him, in which he lost many friends, but at the same time, together with his comrades-in-arms, destroyed 48 mercenaries, among whom were Poles, Swedes, Norwegians and others.

One of the former prisoners is taking home a cat, which he picked up as a kitten in the Donbass. Together with the fighter, she went through the trenches, shelling, all the hostilities in which the military took part. According to him, he is going home in order to take his “combat girlfriend” to peaceful conditions and return to the front line again to finish what he started.


Earlier, the journalists of the TV channel Russia Today managed to visit on the basis of Wagner PMC, where the company's recruits are trained to participate in the SVO. At the training base, fighters train in shooting from various types of weapons, learn to storm enemy trenches, and hone their combat skills in urban environments.
Reporterin Yandex News
Reporterin Yandex Zen
8 comments
Information
Dear reader, to leave comments on the publication, you must sign in.