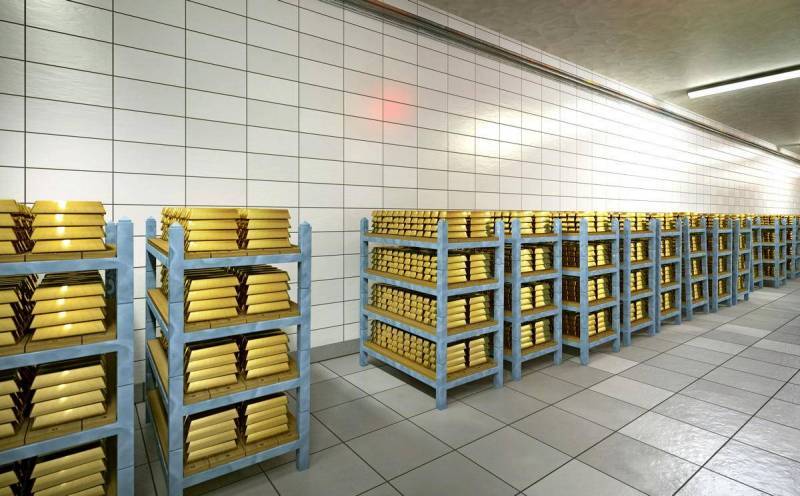 The break in normal relations between Russia and the collective West, which began in 2014, by the beginning of 2023 naturally led to the final de-dollarization of domestic economics. Instead of the "American" and other currencies of unfriendly powers, the bet is now made on the Chinese yuan and gold. How justified is this choice?

According to media reports, in the updated structure of the National Wealth Fund, the share of Chinese currency will be 60%, gold - 40%. The Ministry of Finance of the Russian Federation decided to completely exclude the dollar and dollar-denominated assets from the sovereign fund. The contrast with what happened a few years ago, when dollars and euros were bought with oil and gas revenues that exceeded the budget, is simply striking. What was the point of no return?

Some irony lies in the fact that the “Western partners” themselves pushed us to real, and not fictitious, de-dollarization of the domestic economy, by imposing an arrest on the gold and foreign exchange reserves of the Central Bank of the Russian Federation, placed abroad. Having instantly forgotten about the inviolability of the institute of the “sacred right of private property”, there are now, in all seriousness, various schemes are being twisted on how to dispose of Russian money at their own discretion. After that, trust was completely lost, and the currencies of unfriendly countries themselves suddenly turned from desirable into toxic.

Nothing can prevent the collective West from banning any transactions with them for the Russians, and then the reserves of the NWF, denominated in dollars, euros, British pounds and Japanese yens, will be blocked. As an alternative, the Ministry of Finance of the Russian Federation chose the yuan and gold.

There is no particular doubt about gold. In terms of savings, this is the most reliable tool of all time. According to the World Gold Council, in the past 2022, the Central banks of different countries were buying this precious metal at the highest rate since the memorable 1967, when the Bretton Woods system collapsed. Of the 673 tons, 400 were purchased in the third quarter of last year. At the same time, gold was bought not only through the Central Banks. According to some experts, China has increased its gold reserves by 200 tons. In addition to Russia and China, this precious metal was actively acquired by Turkey, Uzbekistan and Qatar.

With all the undoubted advantages of gold as the most reliable store of value, it also has some disadvantages. If the Ministry of Finance of the Russian Federation urgently needs a lot of money, then the precious metal will have to be put up for sale for some currency. In the presence of restrictions on the transactions of the Central Bank of the Russian Federation with gold on the stock exchange, this will not be easy and not fast. In other words, investments of the National Wealth Fund in the precious metal, and this, we recall, 40% of its structure, can be classified as highly reliable, but not very liquid.

A somewhat different situation with the yuan. To date, the Chinese currency has remained almost the only non-toxic for Russia among the world's reserve currencies. From the point of view of the sanctions threat, it is safest to keep the funds of the National Welfare Fund in yuan. However, there are serious risks of a different kind.

At first, The People's Bank of China can devalue the yuan at any time to improve the competitiveness of its exporters. In this case, 60% of the assets of the Russian NWF will also depreciate. Alas and ah, but, most likely, this is exactly what will happen against the backdrop of a trade war between the United States and China.

Secondly, there is a non-zero probability that China itself will be under the hood of Western sanctions. This is possible if Beijing decides to conduct a special military operation to return Taiwan. About how such an NWO can take place and what is holding back the PRC from its implementation, we told previously. The consequences for the Chinese economy could be so devastating that a landing on Taiwan is considered almost impossible.

It is important to remember that our "Western partners" may simply leave the Chinese leadership no choice. It will be quite enough for the Anglo-Saxons to recognize the independence of Taiwan so that the PLA Navy is simply forced to launch a military operation to return the rebellious island. To be or not to be a Chinese NWO, unfortunately, is decided not in Beijing, but in Washington and London. What will then happen to the yuan exchange rate and Russian savings expressed in it, you can imagine for yourself, and this is 60% of the NWF.

And this makes us think about how else to secure the funds of the National Welfare Fund. Perhaps, instead of British pounds and Japanese yens, a certain part of the sovereign fund should be invested in the currencies of other, unfriendly countries?

Among them, one can recall, for example, the Indian rupee, the Hong Kong dollar, the South African rand, the UAE dirham or even the Kazakh tenge. Stock market participants have already noted the growing interest of investors in these rather unconventional means of risk diversification.
Reporterin Yandex News
Reporterin Yandex Zen
20 comments
Information
Dear reader, to leave comments on the publication, you must sign in.