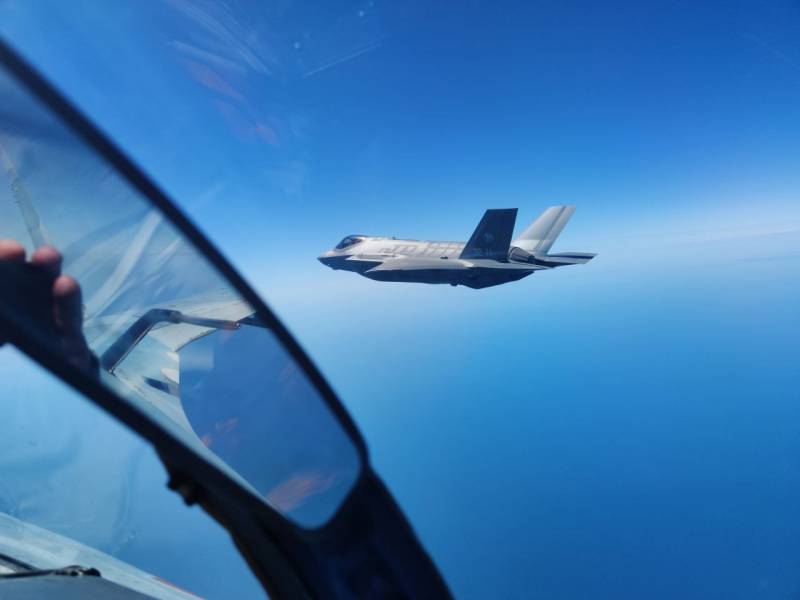 The social network got footage of the next interception of the “invisible” American F-35 fighter over the Baltic Sea by two Russian Su-27s. Also visible in the video is the fourth-generation Swedish fighter Saab JAS 39 Gripen.


The video is being filmed from a Russian aircraft.


The first case of F-35 interception in this region occurred in October 2021, when NATO fighters took off towards Russian Tu-160 bombers, but were later intercepted by two Russian Su-27Ps from the Baltic Fleet. According to the Telegram channel Fighterbomber, this was the first interception of the Su-27P of the A.I. Pokryshkin Guards Fighter Regiment of F-35 fighters over the Baltic Sea.

Formerly the latest American fighter F-35B crashed while practicing vertical takeoff and landing at Fort Worth Naval Air Station in Texas. The plane landed unsuccessfully on the runway - its nose gear broke. The incident was reported by Lockheed Martin. The pilot was able to safely eject, and his life is out of danger.
Reporterin Yandex News
Reporterin Yandex Zen
4 comments
Information
Dear reader, to leave comments on the publication, you must sign in.