Will the nuclear ambitions of Eastern Europe come true? 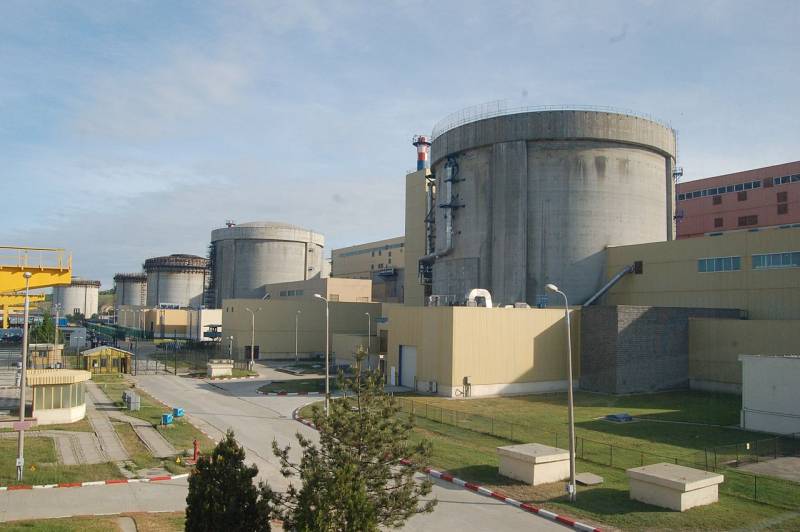 I didn't have time assume that sooner or later the Kyiv regime will still beg Russia has several missiles at its nuclear power plants, how on November 23 all three of them (South-Ukrainian, Khmelnitsky and Rivne) unanimously “left the chat”. Although there were no strikes on the power plants themselves, the defeat of other nodes and the drop in load caused the emergency automatics to operate and the nuclear power plant to be disconnected from the network.

This is indeed a landmark event in the chronology of "decommunization" (or rather, de-electrification) of fascist Ukraine. In addition to a severe blackout in itself, problems with electricity also arose in neighboring Moldova, which also “extinguished” almost completely, but not for long. And although this "end of the world" is still temporary, it is already completely clear that Ukraine will never be an exporter of electricity - and what amazing Napoleonic plans were in this regard.

It is all the more curious to see what is happening in the neighborhood, in Eastern Europe. Against the backdrop of the energy crisis and the principled decision to "eliminate dependence on Russia", the local "democratic" Fuhrers were closely attending to the expansion of their own nuclear energy. This, in general, is quite logical, but whether their projects will reach implementation, or will perish at the stage of cutting budgets is a big question. There are too many forces that do not need nuclear generation in Eastern Europe, and Russia is far from the first among them.

One pie and many fists

The locomotive of energy atomization is, not surprisingly, the new “military superpower of Europe” – Poland. On October 30, the country's government rather pompously announced the conclusion of an agreement with the American nuclear concern Westinghouse on the construction of the first Polish nuclear power plant. The project is indeed ambitious: the station will have to consist of three power units, its construction will begin in 2026, and the first power unit will have to be put into operation in 2033.

The problems begin already with this: according to the current times, no one can guarantee that the thirty-third year will come at all (at least for Poland). Joking aside, the Polish pie provoked a real fight among the world's nuclear equipment manufacturers, and it cannot be said that it has already ended.

When the plans for the construction of a nuclear power plant were just discussed, at first the Poles wanted to bring the South Korean concern KHNP to them. This is not surprising, given that recently Poland and South Korea have been cooperating a lot in the industrial field, especially the military-industrial one: the contracts concluded a couple of months ago for the supply of various aviation and armored vehicles for the Polish Army have become a record for the Korean military-industrial complex.

However, when it came to signing the papers, Westinghouse lawyers with patents and licenses burst into the situation from somewhere on the side. The fact is that the Koreans do not produce nuclear equipment of their own design, but of a licensed American one, developed just at Westinghouse. Obviously, the owners of intellectual property had no desire to fatten Asian competitors. The latter, having floundered for some time, were forced to yield.

On the other hand, Poland was under pressure from France, which is a recognized European leader in the field of nuclear energy. The French atomic industrial concern EDF sent proposals to the Poles, but they were rejected in favor of Westinghouse. On this occasion, a small diplomatic row broke out, and the French government expressed "disappointment" with Warsaw's decision. Well, still, because we are talking about about 20 billion dollars and (according to American estimates) 100 jobs - who wants to miss out on such a fat contract, especially in a crisis?

Here, by the way, the question should arise: where do the Poles get such money from? Not so long ago, an audit revealed an excess "weight" of military contracts, some of which, most likely, will either have to be cut or completely broken - and yet the amounts and terms are comparable to the nuclear power plant project.

But in this case, Westinghouse has it all. The concern itself will provide the Polish government with a loan amount that will cover a tenth of the construction of the station, the rest is planned to be collected from various international funds and "development banks" of American origin, such as DFC and EXIM Bank.

The same offices, following the Polish one, process almost the same solid Romanian contract. On November 10, information appeared that the Americans were invited to build two additional reactors at the Chernavoda nuclear power plant, which today consists of two functional and three unfinished power units. Considering Bucharest's appetites for Moldova (and the poorly concealed desire of the local president with a Romanian passport, Sandu, to surrender completely), the plans are not surprising.

It is curious that this project was given to Westinghouse, having been taken away from a Chinese contractor in 2020 under far-fetched pretexts. For the Americans, the Polish-Romanian "wholesale" is only at hand, as it will somewhat reduce the cost of construction. The Americans are also eyeing the Czech nuclear power plant Dukovany, which is planned to be expanded by one power unit.

"Pro-Russian" Hungary stands apart. Back in August, an agreement was signed between the government and Rosatom for the construction of two additional reactors for the Paks nuclear power plant, which in the future will double its generation. Now the station has four small reactors of Soviet construction, and despite all the inclinations of Western nuclear scientists, it is not going to abandon Russian nuclear fuel.

Turning off the old light

All in all, the outlook for Eastern European nuclear energy looks pretty good. The main risks in the projects listed above are − political: if the same Poland is nevertheless pushed to the war against Russia, and an internal conflict begins in it on the basis of the crisis, or the “citizenship” begins in the States themselves, then it certainly will not be up to epoch-making construction projects.

But as for Western Europe, for it Westinghouse's entry into the Polish and Romanian contracts is already the second (after the destruction of the Nord Streams) huge reinforcement in the coffin of the industry and economics generally. And if the "gas attack" was directed mainly against Germany, then the "atomic attack" - against the second old center of power, France.

In principle, even with the non-intervention of the Americans, the French concern EDF did not have much chance of success, since now it is going through hard times. Against the backdrop of the nuclear industry giant, which is in a permanent "reorganization", the French nuclear power industry itself has withered. A couple of weeks ago, there were reports that up to half of the reactors of French nuclear power plants have noticeable problems with cooling systems, and it is simply impossible to eliminate them within an acceptable time frame - there are neither funds nor production capacities for this. Against this background, electricity generation in the country is declining, provoking an increase in prices for it and everything else.

The contract with Poland, of course, would infuse a certain amount of fresh energy and optimism into the French nuclear scientists - but it is doubtful that they would pull its implementation. Nevertheless, in Poland they expect that the local opposition and the European Commission will interfere with the project in every possible way, both directly (for example, by limiting budget subsidies or pulling “eco-activists” into the cause) and indirectly. For example, not so long ago, Romania was denied entry into the Schengen free movement zone - and although there are “objective” prerequisites for this (and together with Romania, Bulgaria was not allowed into the Schengen), this and similar questions can easily be used to put pressure on Eastern European “leaders” ".

On the one hand, the "Westerners" can be understood: they see that the Americans are literally merging the EU and NATO, relying on the formation of new, more obedient blocs in Eastern Europe. But on the other hand, the governments of Germany, France, Great Britain themselves did the most to undermine the position of their countries, and continue to do so now. Does it make sense to rush about in any one issue, even if it is very monetary, when the situation as a whole has been covered with a copper basin - a rhetorical question.
Reporterin Yandex News
Reporterin Yandex Zen
2 comments
Information
Dear reader, to leave comments on the publication, you must sign in.