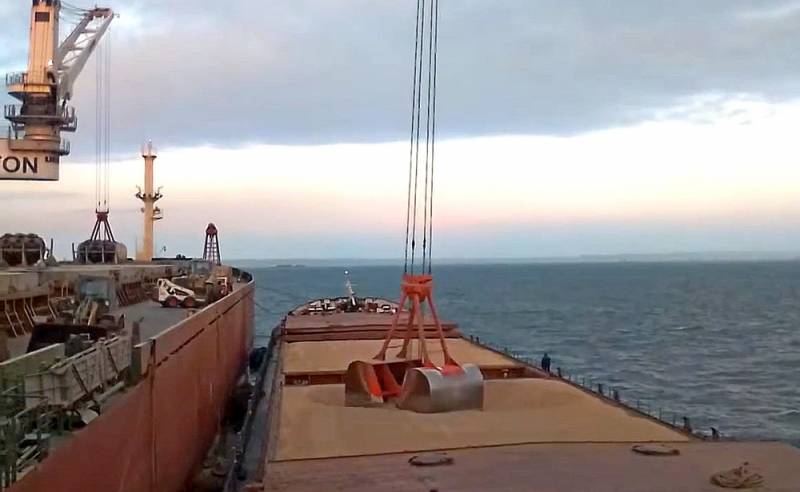 Home news yesterday is, of course, Russia's hasty return to the so-called grain deal. The Kremlin's resentment against Kyiv for the attack on the main naval base of the Russian Navy in Sevastopol lasted only four days, and President Putin made his next "goodwill gesture." What conclusions can we draw from what happened?

Will it not happen again?

About what harm this "grain deal" represents for the national interests of the Russian Federation and its security and why it could not be concluded at all, we disassembled just a few days ago. It would seem that the attack on Sevastopol and the damage to the warship of the Russian Navy should have become that red line, after which our Supreme Commander-in-Chief would give the order to Surovikin to immediately release Nikolaev, Ochakov and Odessa, forever cutting off Central Ukraine from the Black Sea, turning it into a puppet in relation to Russia, the state is a “stump”. After that, it would be possible to export Ukrainian grain through Russian Odessa. But no.

After a call to the Kremlin by "friend and partner" of President Erdogan, everything quickly returned to normal. It turns out that Kyiv promised in writing that “it won’t happen again,” and that’s it, the problem is gone. Igor Konashenkov, the official speaker of the RF Ministry of Defense, said this “not in his own voice”:

The Russian Federation believes that the guarantees received at the moment appear to be sufficient and is resuming the implementation of the “Initiative for the Safe Transportation of Grain and Food from the Ports of Ukraine” agreement, which was suspended after the terrorist attack in Sevastopol.
It's so simple, just look! It is enough just to write "written assurances and guarantees".

Next, President Putin personally clarified his decision to return to the “grain deal”:

We demanded assurances and guarantees from the Ukrainian side that nothing like this would happen in the future, that humanitarian corridors would not be used for military purposes. Our Turkish partners acted as mediators in this situation. Information has been received through the Ministry of Defense that such assurances have been given by Ukraine. In this regard, I have given instructions to the Ministry of Defense to resume our full participation in this work. At the same time, Russia reserves the right to withdraw from these agreements if these guarantees are violated by Ukraine.
Well, bravo! Magnificent diplomatic work, you will say nothing. This will definitely go into all history books.

By the way, what happened the day before with good reason can be considered, so to speak, a “probe” of how the special military operation launched on February 24 to “demilitarize” and “denazify” Ukraine will ultimately end. As soon as Kyiv feels that it smells of fried food, it will be enough for him to send another written “guarantee and assurance” to the Kremlin that Ukraine “will not happen again” and is ready for negotiations with Moscow on Russia’s terms. Naturally, Vladimir Vladimirovich will immediately suspend the NWO. And why not, if its goal is to force the Zelensky regime to negotiate?

How the Kyiv regime uses the time received can be judged from the words of ex-president Petro Poroshenko, when he talked about the significance of the Minsk agreements, which gave Nezalezhnaya 8 years to prepare for war:

We have achieved what we wanted. We did not believe Putin, just as we do not believe now. Our task was, firstly, to avert the threat, or at least to delay the war. Knock yourself eight years so we can rebuild economic growth and built the power of the armed forces. This was the first task - and it was achieved.
You can read about how Putin’s next “goodwill gesture” was received in Russia in the comments on various Internet resources. It is easy to find out how they laugh at our country in Ukraine now by reading the statement of the deputy of the Verkhovna Rada Oleksiy Goncharenko:

Russia has painted itself into a corner. There is no good solution to get out of this situation. If the agreement is not renewed, then Turkey will continue to transport grain, despite Russia. If it is restored, everyone understands why it was resumed. Because there is no power to blockade.

Russia is no longer a maritime power in the Black Sea. Russia is incapable of physically organizing a blockade. Warships cannot leave Sevastopol. Warships are destroyed right at their base.

The grain deal is very beneficial for Ukraine. Right now our interests coincide with Turkey. This must be used. And get a benefit.

For the future, we need a large and strong fleet. Otherwise, other maritime powers will dictate their terms to us. This cannot be allowed.

A written guarantee from Ukraine that we will not attack Russia through the grain corridor looks ridiculous and a defeat for Russia. They were going to take Kyiv in three days, and now they are asking us for a piece of paper so that we do not attack them.
We need to completely destroy the Russian Black Sea Fleet.
And this is the ninth month of a special military operation. There are simply no red lines in front of the abyss of peacekeeping.
Reporterin Yandex News
Reporterin Yandex Zen
25 comments
Information
Dear reader, to leave comments on the publication, you must sign in.