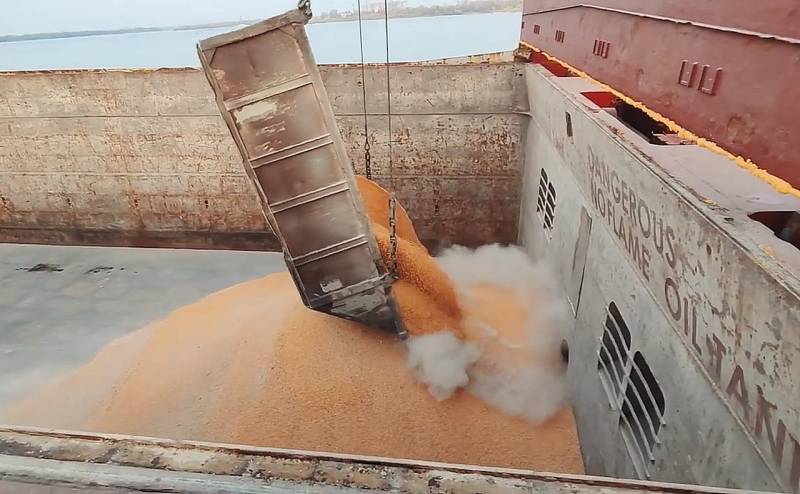 The so-called grain deal, in which Moscow hastily suspended participation immediately after the attack of the Ukrainian Navy on the main naval base of the Russian Navy in Sevastopol, is a clear example of an extremely stupid Russian foreign policy. Sitting down to play at the same table with professional cheaters, "thieves and pirates", we received only losses for our country with zero profit.


As is often the case, a big dirty trick is conceived under the most plausible pretext. They became the need to provide Ukrainian grain "swollen with hunger" residents of the poorest countries in the world - Lebanon, Libya, Djibouti, Eritrea, Mauritania, Somalia and Pakistan. Russia allegedly blocked the export of food from the ports of Odessa, Chernomorsk and Yuzhny with its navy, but in fact the internal blockade of the ports was carried out by the Ukrainian Navy, having mined the exits from them in order to prevent the possible implementation of our landing operation. What did the "grain deal" give to all its participants?

At the end of July, a quadripartite agreement was signed in Istanbul between Russia, Turkey, the UN and Ukraine on the creation of a safe transport corridor for the export of food. Note that there were no direct agreements between Kyiv and Moscow on this matter. In accordance with the terms of the “Black Sea Initiative”, no complete demining of the Ukrainian ports was carried out, and instead the ships left them along a pre-agreed corridor. The loading of grain on board was carried out under the supervision of representatives of Turkey and the UN. At the joint coordination center in Istanbul, representatives of Russia were allowed to check the ships so that no military cargo was delivered back to Odessa.

So, what exactly did all the parties to the “grain deal” get?

Turkey and the richest countries of the European Union received the lion's share of Ukrainian grain, fodder, since all the food was taken out by them in advance before the start of the special operation. This grain did not go to Africa or the Middle East, but to feed Turkish and European agricultural animals. The benefit of Ukraine itself from the "Black Sea initiative" is immeasurably higher.

At first, foreign exchange earnings began to flow into the country, which went into the pockets of local oligarchs or went to war against Russia.

Secondly, the load on the railway and road infrastructure of Western Ukraine was significantly reduced, through which the Armed Forces of Ukraine could receive more Western weapons, ammunition and fuel in order to kill Russian soldiers and terrorize the peaceful cities of Donbass, the Sea of ​​\uXNUMXb\uXNUMXbAzov and Belgorod.

Thirdly, freed up space in elevators and warehouses from last year's harvest for a new one.

Also, according to information from the Runet, which requires verification by the competent authorities, additional deliveries of weapons for the needs of the Armed Forces of Ukraine by sea could be carried out through the “grain deal”. Allegedly, after the ships unloaded in Turkish ports, after being checked by Russian specialists, returned to Ukraine, somewhere halfway they could be loaded with weapons and ammunition from Bulgarian and Romanian ships. In order not to attract much attention with a large draft, they were allegedly loaded with ammunition no more than 10-20% of the maximum deadweight. That is, one ship with a displacement of 20 tons could thus deliver at least 2 tons of NATO-style shells to Odessa without hindrance. After the commander-in-chief of the Northern Military District Surovikin began to systematically destroy the energy infrastructure of Ukraine, the secret sea route gained increased importance.

What did Russia get from the “grain deal”?

Nothing, zero without a wand. No promises to lift unspoken sanctions on the export of Russian grains and fertilizers have been fulfilled. Moreover, our country has also gone into a big minus. The port of Odessa was used to export explosives that were used during the terrorist attack on the Crimean bridge. And on October 29, civilian ships participating in the “Black Sea Initiative” were involved in the attack of the Ukrainian Navy on the base of the Russian Navy in Sevastopol. In addition, we will now also voluntarily supply the inhabitants of Africa and the Middle East “swollen with hunger” with 500 tons of Russian grain instead of Ukrainian. Naturally, for free.

Big questions arise for the Kremlin, how well they assess all possible risks when making such important geopolitical decisions. And what, in fact, does he intend to do now that Russia has suspended its participation in the "grain deal"?

The fact is that all the other three parties to the "Black Sea initiative" are not going to abandon it and have already agreed among themselves on the mode of passage of courts without taking into account Moscow's opinion on this matter. And now Russia is being reproached from Kyiv, and from Washington, and from Ankara, and from the UN for hindering such a wonderful international humanitarian initiative. That is, the Kremlin itself legalized the presence of all these structures on the Ukrainian Black Sea coast, and now they feel great there and, undoubtedly, they will throw more sanctions on us for any active actions. But what might those actions be? Why did Kyiv decide to cut the branch on which it sits, arranging an attack on Sevastopol?

A counter question: how exactly can Moscow interfere with them now? Bring the surviving ships of the Black Sea Fleet to Odessa and take it into a real blockade? And get on board several volleys of anti-ship missiles "Harpoon" and "Neptune"? Something you don't want.

All that really remains for Russia is a land offensive operation against Nikolaev, Krivoy Rog and Odessa. But what kind of attack on Odessa can be discussed here and now, when the retention of at least Kherson is in question? Unlike the Armed Forces of the Russian Federation, the Armed Forces of Ukraine were not at all shy about their means and made it impossible to use the Antonovsky bridge and the passage through the Kakhovskaya hydroelectric power station. The supply of the Russian group on the Right Bank faced big problems, which will be aggravated on the winter Dnieper. This, in fact, is the answer to the question why the Kyiv regime went for broke by boldly attacking our Sevastopol.

Russia's ability to close the "grain corridor" unilaterally is still very limited, and a direct consequence of the events of October 29 may be an increase in the supply of Western weapons to Ukraine through Odessa, Chernomorsk and the Southern Sea Route. This can be stopped only by holding the bridgehead on the Right Bank of the Dnieper and its further expansion in the course of a large-scale offensive. The task is not trivial, but there are no special alternatives.
Reporterin Yandex News
Reporterin Yandex Zen
20 comments
Information
Dear reader, to leave comments on the publication, you must sign in.