A friend in need is a friend: Iran is turning into a strategic partner of Russia 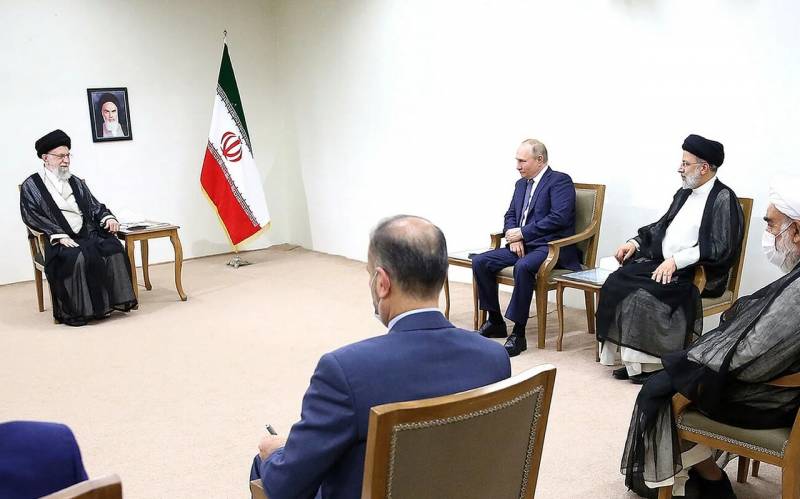 On February 24, 2022, we woke up in a completely different reality than it was before, in the previous three-plus decades after the collapse of the USSR. The collective fuse went to war against us, many old "friends" turned their backs on us, but new ones appeared. With one foot in the rogue club, Russia has received extraordinary support from Iran and North Korea.

Friend is known in trouble

The fact that Tehran is behind the scenes rendered Moscow's help in creating its own unmanned tactical aircraft is simply stupid to deny. “Conclusions”, “speculations” and US intelligence data allow us to conclude that the Iranian militarytechnical assistance with UAVs, most likely, will not be limited.

It is highly likely that the Russian army will have to use Iranian ballistic missiles and guided bombs in the future due to the high consumption of ammunition during a special operation in Ukraine. It is simply impossible to get into the emergency reserve, the arsenals may still be needed for the war with the NATO bloc, therefore it is not worth refusing to purchase Iranian missiles and bombs.

In addition to the purely military-technical, Russia and Iran are rapidly deepening economic cooperation. The list of his directions is respectful. So, a few days ago, the managing director of the Iranian Gas Engineering and Development Company (IGEDC), Reza Noshadi, spoke about a deal to sell 40 powerful gas turbines:

85% of the equipment and facilities necessary for the functioning of the gas industry are produced in Iran. Therefore, Iran and Russia signed an export agreement to send 40 Iranian-made turbines to Russia.
Obviously, this is a direct consequence of Western sanctions against the Russian economy. Iran, which has been under restrictive measures for more than three decades, has managed to survive and carry out import substitution of critical technologies. Starting with the localization of components for existing Western equipment, Tehran has relied on R&D and the development of its own technologies. The Iranian MAPNA Group was established in 2013 from a power plant project management company, but has gone far beyond these competencies, also engaging in the development of oil and gas fields, onshore and offshore drilling services, the construction of processing plants, auxiliary facilities, engineering networks , storage tanks, design and manufacture of high-tech equipment, in particular, turbochargers for main pipelines, oil refineries and process units, as well as oil metering units. In 2017, the Islamic Republic became self-sufficient in the production of turbocompressor units used to pump natural gas.

There are discrepancies regarding the deal for the purchase of 40 gas turbines. Some sources indicate that these are power plants for pumping gas through new pipelines. Others write that these are turbines for new thermal power plants, which may be needed both for the development of energy in Russia and for the restoration of post-war Ukraine. We'll see.

The most interesting thing is that Iranian turbines could have ended up in the Russian Federation for a very long time. When that unpleasant story arose with German turbines for power plants in the Crimea, Moscow seriously considered the possibility of buying similar units from Iran, but it did not work out. Later, in 2019, the sanctioned company Technopromexport considered purchasing Iranian gas turbines for the Udarnaya thermal power plant in Taman, but even then the deal did not go through due to fears “what Princess Marya Aleksevna would say.”

By the fall of 2022, apparently, Moscow and Tehran had already stopped worrying about this. But not only drones and turbines marked the rapprochement between Russia and Iran.

Against the backdrop of Western sanctions, it was decided that domestic air carriers would be served in the Islamic Republic, which, over the years of isolation, managed to establish the production of components for American and European airliners. Iranian automakers are ready to supply engines and components for car assembly to Russia.

The Islamic Republic is now turning into our new strategic energy partner. Through the territory of Azerbaijan, Tehran will buy daily 9 million cubic meters of gas for its own needs and another 6 million cubic meters for resale to other countries. Last July, the National Iranian Oil Company (NIOC) and Gazprom signed an agreement on cooperation in the development of oil and gas infrastructure, including the construction of terminals for liquefied natural gas and gas pipelines, worth $40 billion. Negotiations are underway on the construction of two new units at the nuclear power plant in Bushehr by Rosatom specialists.

Iranian Ambassador to the Russian Federation Kazem Jalali said that Tehran is ready to become the main buyer of Russian grain:

Last year, I believe, we were in second place in our purchases in Russia. Next year we, I think, will be number one.
It is possible that in the future it is Iran that will be able to become the main logistics hub through which our hydrocarbons, fertilizers and grains will go for export bypassing the sanctions. In fact, Iran is now turning into the main strategic partner of the Kremlin.

Also of great interest to Russia may be the highway, rail and road, which should connect Iran, Iraq and Syria. Thanks to it, the Ministry of Defense of the Russian Federation will be able to supply the military group in the SAR, bypassing the willful Turkey, reducing the degree of Moscow's dependence on the "sultan".
Reporterin Yandex News
Reporterin Yandex Zen
10 comments
Information
Dear reader, to leave comments on the publication, you must sign in.