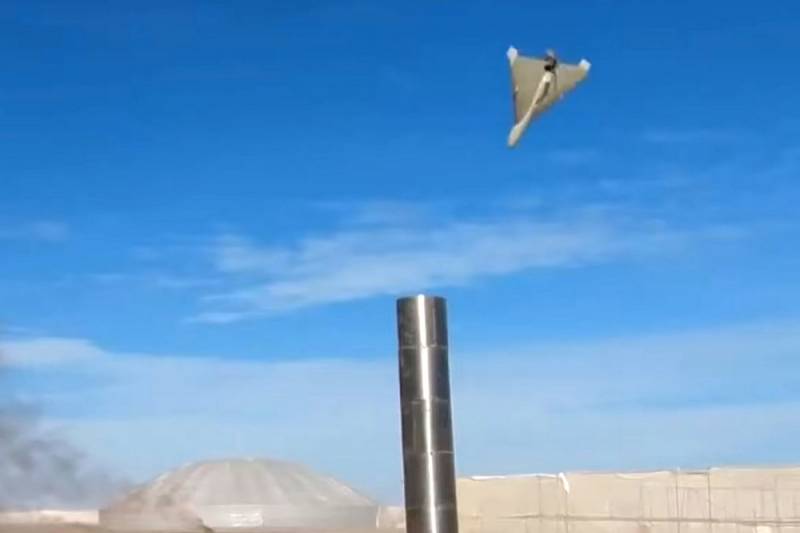 Literally from the first days after the start of the special operation, it became clear that the Russian army approached it not quite ready. The weak point, which was ultimately recognized at the very top, was the component of unmanned aircraft, reconnaissance and reconnaissance-strike, as well as "kamikaze" drones. As it sometimes happens with us, we had to rebuild along the way.

Blinded from what was

Formally, we have all types of drones - from small ones like Orlan to the heaviest ones like Altius-U and Okhotnik. The problem is that the last two have been in the testing stage for many years, so you should not expect them on the battlefield in the near future. There are enough reconnaissance "Orlans" at the front, but the problem is that their filling is a combined "hodgepodge" of Chinese components from civilian drones. What to do if the channel of their supply is blocked is not entirely clear. The fact that the majority of UAVs assembled in Russia do not meet the tactical and technical requirements of the RF Ministry of Defense precisely because of the lack of a domestic component base, was recently stated by a representative of the department, Colonel Igor Ischuk.

In the meantime, volunteers are buying ordinary civilian quadrocopters, known as Mavik, for reconnaissance and adjusting artillery fire in China for the needs of the “militiamen” of Donbass. Craftsmen in the Russian army make handicrafts of ordinary reconnaissance Orlans into warhead carriers and try to use them as shock weapons. On the positive side, it can be noted that the Kronstadt enterprise opened a new plant for the production of UAVs of aircraft and helicopter types in Dubna near Moscow, which switched to a three-shift operation, as explained by its CEO Alexei Belykh:

The new plant for the production of unmanned aerial vehicles will soon switch to a three-shift operation in order to fulfill the orders received.
The main "workhorse" of domestic production for the Armed Forces of the Russian Federation so far is the reconnaissance and strike UAV "Pacer", also known as "Orion". It belongs to the class of medium-altitude, having a long flight duration and is capable of carrying up to four air-to-ground missiles. "Pacer" is a direct competitor of the Turkish "Bayraktar" and our "Great White Hope" on a par with "Altius-U" and "Hunter".

But this is all a matter of the foreseeable future, and the war, heavy and bloody, has been going on for almost eight months. Our military urgently needs reconnaissance drones to correct artillery fire, strike and reconnaissance drones to destroy enemy armored vehicles with anti-tank missiles in real time, kamikaze drones to instill fear and awe. And then friends from Persia came to our aid behind the scenes.

It should be noted that neither Tehran nor Moscow officially confirm the delivery of Iranian drones to Russia, but you and I are not small children either. Judging by the nerve-wracking “buzz” in the sky over Ukraine, the information of the American intelligence services and Western media affiliated with them about the acquisition of Iranian UAVs for the needs of the RF Armed Forces turned out to be correct. And it's beautiful news for us and bad for the Kyiv regime.

"Geraniums", or "Shahids", began to be used at the front at the end of August, and the activity of their use is constantly increasing. These primitive, at first glance, kamikaze drones proved to be exceptionally effective. Assembled from the simplest components, with a simple motor, which gave them the name "flying mopeds", the mass-produced and inexpensive Iranian "Shaheeds" with the Russian name almost irresistibly carry a powerful explosive charge to the target. At first, Ukrainian propaganda made fun of them, Aleksey Arestovich commented on their effectiveness as follows:

The Iranian drone is a machine of a much previous generation, made on its knee, but it can solve some part of its task, because in this war, children's quadrocopters also solve problems - with improvised grips and throwing grenades.
However, soon Arestovich himself was forced to admit that with these cheap "kamikaze" drones, the RF Armed Forces were able to literally "hammer" the air defense system of Nezalezhnaya:

They have found the key to our air defense, and this key is to force us to fire the entire missile stock, fighting the drones, of which 2,4 thousand have been chartered ... For two or three months they can nightmare us in such a mode as today.
Things could soon get worse for the Kyiv regime if Iran does supply Russia with its latest heavy-duty kamikaze drones called the Arash-2. According to open data, their flight range is from 1000 to 2000 kilometers, the weight of the warhead is 200 kilograms, which allows them to be classified as strategic. The drone has a dual control system, anti-interference, self-guided by an electronic pulse. In fact, this is a cruise missile, only many times cheaper. What the Russian army needs now, which has already decently spent its Caliber and needs time to restore its missile arsenals.

"Arash" was developed specifically for a swarm attack on Israeli territory, covered by a layered air defense / missile defense system. Ideally, these drones should fly in conjunction with Shahab ballistic missiles and Meshkat cruise missiles, penetrating any Iron Dome. If they really get into service with us, they will pose a threat not only to the Kyiv regime, but also to the Eastern European countries of the NATO bloc. I wonder what we'll call them? "Robber"?

Meanwhile, in Russia, a new military registration specialty is being formed in fact - “pilot - UAV operator”. Drone control is taught both in civilian universities and in the military, which the Russian Defense Ministry is now paying special attention to, Deputy Minister Yunus-Bek Yevkurov explained:

Unmanned aerial vehicles play an important role in solving the combat tasks of a special military operation, which gives the training of UAV operators a special status.
The decision to form special drone companies in the RF Armed Forces was made only in 2013. The highest school for UAV operators today is the 924th State Center for Unmanned Aviation of the Ministry of Defense of the Russian Federation, located in Kolomna, where UAV operators, mechanics and technicians are trained for operation. Also, the promising VUS is trained at the Zhukovsky and Gagarin Air Force Academy in Voronezh and on the basis of the Ryazan Higher Airborne Command School. Future officers will be trained to command unmanned units in one of the combined arms command schools of the RF Ministry of Defense.

Thus, with the friendly help of Iran, Russia is rebuilding itself on the move and, in fact, creating effective unmanned tactical aircraft from scratch, while simultaneously training professional personnel. The lessons learned during the NMD proved to be cruel, but our army will eventually become stronger.
Reporterin Yandex News
Reporterin Yandex Zen
26 comments
Information
Dear reader, to leave comments on the publication, you must sign in.