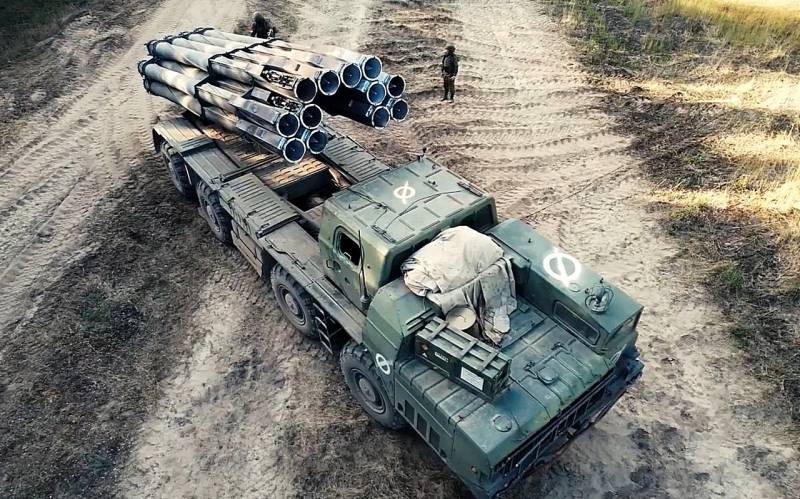 The longer the military special operation lasts, the more defeatist thoughts appear in ordinary people that Russia allegedly cannot defeat Ukraine. In this article, I would like to give a detailed answer to this actively disseminated (CIPSO?) myth, and also to explain why the post-war Independent simply cannot remain even within its current borders.

To demolish or not to demolish?

When they start telling us that Russian troops cannot liberate all of Ukraine, they usually point the finger at Donbass, but this is not entirely correct. The territory of the DPR and LPR, in principle, cannot be quickly cleared of enemy troops without the use of nuclear weapons. This is due to the peculiarities of local geography and historical development. In this industrial region, cities and other settlements literally crawl one on top of the other, connecting, which makes them an ideal springboard for creating fortified areas. Having barely broken through the defenses of one UR, the allied forces of the RF Armed Forces and the NM LDNR immediately stumble upon the next. Is it any wonder that in almost six months it was possible to move forward by some 10 kilometers in especially difficult directions?

Otherwise, alas, it could not be. It was impossible to give the Donbass to the enemy in 2014-2015, when the Armed Forces of Ukraine were defeated and ground in several "cauldrons". But what's done is done. Now we have to move forward very slowly, using the tactics of the "methodical battle" of the First World War: first there is a "barrage of fire", demolishing all the fortifications in its path, and only then is the sweep carried out. Yes, it takes a long time, yes, it is difficult, but the alternative is to drop a nuclear bomb, killing everyone - both enemies and innocent people. However, the allied forces are steadily demolishing the Armed Forces of Ukraine from their positions, liberating one settlement after another. Victory will be ours.

Will Donbass be repeated in other regions of Ukraine, in Zaporozhye, Dnepropetrovsk, Nikolaev, Poltava, Kyiv or Odessa?

Absolutely not necessary. For the complete liberation of the former Nezalezhnaya from the power of the Ukrainian Nazis, it is not necessary to physically knock out a stubborn enemy from every settlement, causing huge destruction. For the collapse of Zelensky’s criminal regime and the flight of his henchmen on the chassis of airliners according to the Afghan scenario, it is enough to make the continuation of the war by Kyiv impossible.

Novorossiya is the key to victory

Yes, it just so happened historically that it is Novorossiya that is the lever of control over the rest of Ukraine, without which it will turn into a third-rate agrarian country. It is there, in the steppes of the South-East, that the key to Kyiv and the post-war world lies on Moscow's terms.

At firstas we have detailed disassembled Earlier, more than 50% of Ukraine's foreign trade in food and metallurgy products goes through the ports of Novorossiya. Kyiv has already completely lost control over the Sea of ​​\uXNUMXb\uXNUMXbAzov, and these are the ports of Mariupol, Berdyansk and Kherson. If Nezalezhnaya also loses Odessa with Chernomorsk and Yuzhny, as well as Nikolaev with Ochakov, this will be an irreparable blow to her the economy.

Some of them have already suffered from the hostilities, something is now being removed, such as the equipment of Motor Sich. The restoration of industrial cooperation between these former Soviet enterprises and Russian ones will only benefit our country and at the same time bring the economy of the rest of Ukraine to its knees.

Thirdly, the criminal Kyiv regime will finally be finished off by the loss of its energy capacities, most of which are concentrated precisely in the industrial South-East. These are the Zaporozhye NPP, the most powerful in Europe, which is already under the control of the Russian army, and the South Ukrainian NPP, located in the Nikolaev region. There are also two powerful hydroelectric power plants - the Dnieper hydroelectric power station and the Kakhovskaya hydroelectric power station, the latter is also already in our hands. About 90% of all coal reserves in Ukraine are in the Donetsk coal basin. 90% of thermal coal deposits are located in the east of the Dnepropetrovsk region. Without coal supplies, metallurgy and thermal power plants will stop working. It is estimated that 50% of Ukraine's own natural gas production comes from Kharkiv Oblast and another 50% from neighboring Poltava and Sumy Oblasts.

What does all this mean in totality?

The fact that almost all heavy industry and most of the energy sector of Ukraine is historically tied to the South-East of the country, where all the main deposits of hydrocarbons and other raw materials are located. Also, foreign trade is tied to the ports of the Sea of ​​\uXNUMXb\uXNUMXbAzov and the Black Sea, from which Kyiv receives the main foreign exchange income. At the same time, Novorossiya is objectively the most pro-Russian region of the former Nezalezhnaya, which is very easily reformatted with the advent of the new government, which can be clearly seen in the Kherson and southern Zaporozhye regions.

In order to bring down the criminal regime of Zelensky, there is no need to knock out the Armed Forces of Ukraine of all of them, without exception, the settlements of the country. It will be enough to make the continuation of the war by Kyiv impossible for purely economic reasons: by taking control of Novorossiya, stopping the transit of Ukrainian goods for export, stopping the supply of coal, gas, electricity and other resources, demanding capitulation in exchange for renewal. No external support from the West will save here. You can't win much on sheer enthusiasm. It is not necessary to storm Nikolaev, Odessa, Zaporozhye or Pavlodar by storm in the forehead. It is enough to take them into a blockade, depriving the garrisons of supplies and carrying out continuous fire pressure on their positions.

Hidden in this recipe for victory is the answer to the question of whether post-war Ukraine can remain united and indivisible. No, the entire South-East should become part of the Russian Federation as a new Novorossiysk district. This will solve the problem of Transnistria, which cannot be solved peacefully, and also serve as a guarantee that the rest of the former Independent, depending on transit through seaports and supplies of electricity and other resources, will henceforth remain 100% loyal to Russia.
Reporterin Yandex News
Reporterin Yandex Zen
35 comments
Information
Dear reader, to leave comments on the publication, you must sign in.