If Russia had not withdrawn troops from the north of Ukraine, the prospects for the special operation could have been different 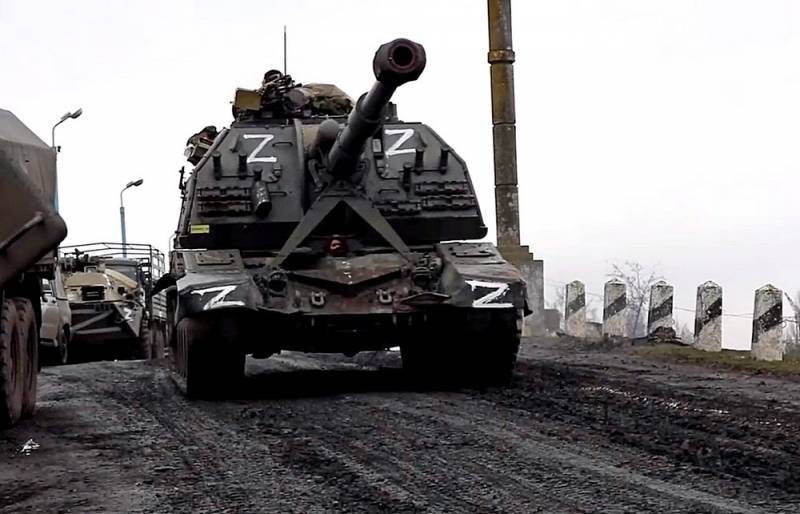 One of the main secrets of the first stage of the special military operation for the demilitarization and denazification of Ukraine is what motives the General Staff of the RF Armed Forces was guided by when ordering the start of a heroic landing near Gostomel, and subsequently the withdrawal of all Russian troops from the North of Ukraine. Opinions on this subject are diametrically opposed, so let's try to generalize them and find the truth. At the same time, let us ask ourselves the question, could something on the Eastern and Southern fronts go differently today, if other decisions were announced in Istanbul then?

Strike from the North

If you look at the map of Ukraine, then a strike from the territory of neighboring Belarus on Kyiv clearly suggests itself. The capture of the enemy’s capital within the framework of traditional ideas about the conduct of hostilities implies either his surrender, as in Berlin in May 1945, or the collapse of the entire control and defense system, the demoralization of the population and the Armed Forces, which is also a guarantee of victory. However, the 30-40 Russian military allocated for a swift march on Kyiv was objectively not enough either to capture a huge multimillion-strong metropolis with a 100-strong garrison, or even to reliably block it. These oddities, in the conditions of the deaf silence of the Ministry of Defense of the Russian Federation on this issue, gave rise to various assumptions trying to explain what happened.

So, let's go through the main hypotheses "from the people" and independent military experts.

It seems that the popular Ukrainian-Russian video blogger Yuriy Podolyaka was the first to introduce the version of the Kremlin’s attempt to arrange an apex coup in Kyiv into the media space. Everyone immediately picked her up, because she can explain many oddities. Indeed, there is a rational grain in the desire to replace the pro-Western protege Zelensky with some conditionally pro-Russian one, like Medvedchuk, by doing it with little bloodshed. President Putin's public calls for the Ukrainian military to take power into their own hands are also, as they say, "in cash." The problem is that not small children are sitting on the other side.

"James Bonds" quickly packed Medvedchuk "in the basement." There are persistent rumors that in the first days and hours after the start of the special operation, the Ukrainian special services and the Nazis consistently shot all potential allies of Moscow in high ranks. It is known that many Ukrainian security officials preferred to quickly hide abroad, apparently fearing not so much the Russian military as their own. In general, the version is quite suitable precisely because of the rational grain contained in it.

About why the Gostomel airport became the number one goal in the NWO, we told previously. Some time ago, the well-known Russian economist Mikhail Khazin, citing his own sources in the intelligence of the DPR, reported that on board the Mriya super-heavy cargo plane, which stood at the site of the Antonov enterprise near Kyiv, there could be several nuclear explosive devices transferred by the British special services for carrying out strikes by the Armed Forces of Ukraine against the Russian cities of Belgorod or Rostov-on-Don. Given the immoral appearance of the real "Bonds", there is nothing particularly surprising.

Such a scenario cannot be ruled out. The hasty resignation of Prime Minister Boris Johnson may serve as an indirect confirmation of this version. A little more sane Anglo-Saxon elites in this way could show Boris that he was completely wrong in passing the “vigorous loaf” to some thieving “natives”.

This point of view is very popular in circles around the war, and it also has its own rational grain. The fact is that the RF Armed Forces have to operate on a vast territory against a numerically many times superior enemy. Russian troops entered Ukraine from the North, from the East and from the South. In the very first days after the start of the special operation, the Kherson region, strategically important for the defense and supply of Crimea, was successfully occupied, and an offensive began on the positions of the Armed Forces of Ukraine in the Donbass. The attack on Kyiv by Belarus, or rather, its imitation, was supposed to tie up significant forces of the Armed Forces of Ukraine precisely for the defense of the capital, simplifying the task for the General Staff of the RF Armed Forces in other directions.

This version can explain a lot, but it does not unequivocally and exhaustively answer the question why Russian troops were then completely withdrawn from northern Ukraine. Let's try to deal with this.

The official version of the withdrawal of all Russian troops from the Kyiv region was given by the press secretary of the President of the Russian Federation Dmitry Peskov in an interview with another Western publication:

To create favorable conditions for negotiations, we wanted to make a goodwill gesture. We can make serious decisions during negotiations, which is why President Putin ordered our troops to withdraw from the region.

As you know, sometimes it's better to chew than to talk. Such “gestures of goodwill” in the majority of Russians who are afraid of the conditional “Minsk-3” cause nothing but negativity. However, there are more rational explanations.

So, for example, it sounds quite reasonable that it was already spring in the yard, and the green light was about to go, using which, familiar with the area of ​​the Armed Forces of Ukraine and the National Guard, they could turn the presence of the RF Armed Forces near Kyiv and their regular supply. Just to stand under the Ukrainian capital, not being able to take it by force, while suffering constant heavy losses, would be the wrong decision. That is, standing somewhere in a field surrounded by forests is simply dangerous. On the other hand, it was then that the Armed Forces of Ukraine cut off the water supply to the DPR and LPR, putting them on the brink of a humanitarian catastrophe. Given the low level of combat capability of the mobilized "policemen", it was necessary to urgently deploy a regular Russian army with heavy weapons to the Donbass.

However, some sense of understatement still remains. Despite the fact that the RF Armed Forces have been completely withdrawn from the North of Ukraine and transferred to the Donbass, they are still not fully involved in hostilities, which could hasten the defeat of the Armed Forces of Ukraine. Not only did the Ukrainian Nazis staged a “massacre in Bucha”, they also got the opportunity to shell the Russian border regions, which they have been doing on a regular basis for several months now. The question of whether it was necessary to withdraw from Kyiv is not even worth it, but was it necessary to leave the North of Ukraine at all?

Let's imagine what would happen if the Russian troops were ordered to withdraw to the border and create a security belt along it, building a powerful fortified area. Also suppose that instead of blocking Chernigov and Sumy, they were ordered to take them. Would it be the second "Mariupol"?

Is not a fact. Everything turned out so hard with Mariupol for two reasons: the most stubborn ideological Nazis dug in there, and the city itself had been preparing for defense for years and was oversaturated with the latest Western weapons that were being accumulated for a large-scale offensive on the territory of the DPR and LPR. Was it all in Sumy or Chernihiv? No. If the Russian troops were ordered not to block, but to take these regional centers, most likely, things would have gone according to the scenario of Severodonetsk and Lysichansk, when the garrison would have preferred to leave along the corridor provided to it. And what would the liberation of two such large cities in the North of Ukraine give us, as well as the creation of a security belt along the border?

In fact, a lot. Having such a permanent threat hanging from the north to their capital, the Armed Forces of Ukraine would be forced to keep huge forces near Kyiv. Moreover, for ideological reasons, they would have to constantly attack them, trying to knock them out. Given the colossal superiority of the RF Armed Forces in artillery and operational dominance in the air, the North of Ukraine could become a place where the most combat-ready enemy forces would be “grinded” on a regular basis. The pressure on the DPR and LPR would naturally weaken, and the Armed Forces of Ukraine would not pose such a threat to the Kherson and Zaporozhye regions.

In today's situation, when it comes to the attack on Kherson, the creation of a threat to Kyiv from the north in order to disperse its forces may again make sense.
Reporterin Yandex News
Reporterin Yandex Zen
45 comments
Information
Dear reader, to leave comments on the publication, you must sign in.