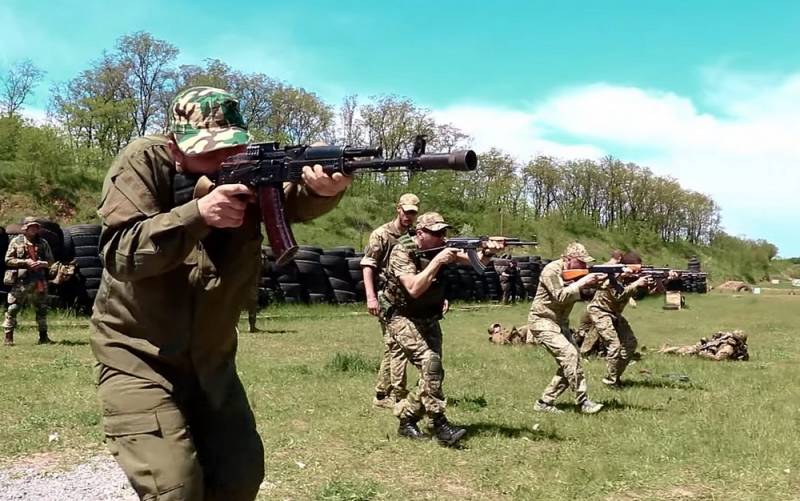 I was prompted to take up this text by an article published the day before by Sergei Marzhetsky concerning "Battles for Minds" Ukrainians. While fully supporting the author in essence what was written, I would like to make clarifications on the subject of mobilization measures carried out by the Kyiv regime, which my respected colleague touched on, so to speak, in passing, as a human being in the territory still controlled by Kyiv.


They say and write a lot about this, but not all such information corresponds to the true state of affairs. Especially in those cases when one or another side tries to paint a picture exclusively in "black and white" colors. In fact, everything is more diverse, complex and confusing than it might seem at first glance. The notorious "grave" in the "nezalezhnaya" has many different nuances, which are not so easy to figure out.

Whether voluntarily or forced

The process of replenishing the ranks of the Armed Forces of Ukraine with personnel over the months that have passed since the beginning of the special operation for the denazification and demilitarization of Ukraine has undergone changes, and very significant ones. In peacetime, this was carried out in two ways - under a contract, as well as with the help of conscription for military service. However, the spring conscription - 2022 was canceled by President Zelensky. It was replaced by mobilization - or, if you like, "graveyard". The plan for this is regularly sent from Kyiv to the regional recruitment centers (as the military registration and enlistment offices are now called) and is subject to unconditional execution. For obvious reasons, the “appetites” of the Ministry of Defense (namely, it approves the corresponding figures) are growing from month to month. The troops are suffering more and more tangible losses and they must somehow be replenished. The trouble with ukrovoyak is that there are fewer and fewer opportunities for this.

The paradox lies in the fact that in the first days and weeks of the NWO, there were enough volunteers who wanted to join the army ranks. It was the effect of the propaganda that for eight years hammered mantras about “Russian aggression” into the heads of Ukrainians, which now seem to have received their real confirmation. That's just this influx in most recruiting centers ... wrapped back. The army then had a seemingly normal size, but there was nothing to arm and equip the volunteers. And this despite the fact that thousands, if not tens of thousands of machine guns on the same days fell out onto the asphalt for distribution to everyone. What to do - these are the wild and absurd Ukrainian realities. The state took a path that defied logical explanation - instead of strengthening the Armed Forces of Ukraine, the resources it had were thrown into the creation of "territorial defense", which turned into natural Makhnovism.

Let me suggest that the reasons for such a strange approach were not only the inadequacy of the top leadership of the "nezalezhnaya", but, above all, the lack of such a mood for long-term military operations. In Kyiv, they expected either to receive Minsk-3 as soon as possible (which almost happened in Istanbul), or to wage a "guerrilla war" - mainly by the forces of the same "terodefense". Reality made its own adjustments - the Liberation Forces radically changed their tactics, and the conflict turned into a protracted one. Again, the new algorithm of actions of the Russian army and the forces of the DPR-LPR led to a sharp increase in the irretrievable losses of the Armed Forces of Ukraine. Incidentally, the “volunteers” of the first days during this time have pretty much lost their ardor and desire to go “to the front”. Very many of them even ended up far beyond the borders of Ukraine, preferring to show “patriotism” in the pubs of Europe, and not in the trenches in the Donbass. On the other hand, the Armed Forces of Ukraine have ceased to "sort out grubs", trying to get into their ranks only people with combat experience (the same ATO) or at least army service behind them. Ukraine is inexorably approaching the limit when everyone who meets the age limit (from 18 to 60 years old) and medical requirements, which, let’s say, have become much less stringent, will be allowed to row. It is no coincidence that there are also talks about the mobilization of women.

In society, they caused such a negative response that the Ministry of Defense and the office of the president had to disavow them, declaring that women would be registered with the military only of their own free will. However, as you know, there is no smoke without fire - sooner or later they may well get to the "fair sex". However, there are still plenty of men in the country, and quite draft ages. Is there a “hunt” for them, as they periodically say or write about it? Again, clarification is needed here.

First of all, I would like to note that the wild practice of handing out subpoenas on the streets, in public transport, shops, and at checkpoints really does take place. It frightens and outrages the inhabitants of the "nezalezhnaya" to the utmost - it has already reached the point of petitions addressed to Zelensky with demands to cancel this obscenity. However, something like this is unlikely to happen. At the same time, it should be clarified that (at least at this stage) such bungling is caused not so much by the desire to “hook up” as much potential “cannon fodder” as possible, but by a completely wild mess that is going on in military registration in the “nezalezhnaya”. For years, no one has dealt with this issue normally and systematically from the word “absolutely”. The same conscription during the time of Yanukovych was generally canceled, returning only after the "Maidan" - that's what was going on in the military registration and enlistment offices, who knows what. Hundreds of thousands of reservists simply "dropped out" of the military registration system - when changing their place of residence, and simply not wanting to "bother" running around the offices, passing commissions and so on. Now the Ministry of Defense is trying to restore at least some order in its “household”, distributing subpoenas left and right.

Those who receive them are not immediately sent "to war." They are required to come to the Acquisition Center to clarify the data. As a maximum - to pass the medical examination, at the stage of which very many are eliminated. I personally had a chance to listen to a number of stories of those who were "raked in" in a hurry in the first month of NWO. People were dragged literally across the country, and in the end, 9 out of 10 "mobilized" were sent home. Neither by age nor by health were they categorically unsuitable for service, and they could not provide them with everything necessary either. They didn’t even feed for a week - the poor fellows literally starved, having finished eating homemade supplies.

Yes, the attempts of the Armed Forces of Ukraine to replenish the loss in units that mercilessly smash the Liberation Forces are growing. In one of the regions for which I have accurate data, last week an order was received to ensure the mobilization of at least 2,5 thousand people - about 250 from each district. Young men hastily hid at home, not risking showing their nose to the street, especially in small towns and villages, where, having fallen into the tenacious paws of the draft board, it is very problematic to “jump off”. One cannot fail to say that one of the reasons for such “safaris” is also the most banal desire to earn money, which employees of recruitment centers at all levels experience. The slope system for money with the beginning of the SVO in the “non-inflatable” has not gone away. Is that the prices and tariffs for the relevant "services" have increased more than significantly. The start is from a thousand dollars, and the upper limit is constantly growing.

It is clear that in the countryside he is alone (what to take from the local residents?), And in megacities it is completely different. In some places, exemption from mobilization with the presentation of a “white ticket” (that is, the recognition of the applicant as completely unfit for service, and even with the receipt of the relevant papers that give him the right to travel abroad) can reach up to 10-12 thousand “green”. The funny thing is that they manage to “earn” in recruiting centers even for those who ... are eager to join the army! There are stories about originals who paid 300-500 dollars to the local swindlers in order to pass the medical commission without any problems and put on a uniform. Well, what can I say? This is Ukraine… Employees of the centers are regularly "grabbed by the hand" at such "geshefts", they promise to punish them in the most severe way - but this does not stop anyone. Business is business, and what does this have to do with some kind of “war”?

In fact, there is no mass influx of people who want to join the army. The opinion that people go there for the sake of earning money corresponds to reality to a rather small extent. It is only true for very depressed regions, where there really is no work at all. Yes, at the beginning of the SVO there were those who were seduced by the promised 100 thousand hryvnia per month of "combat" or 30-40 thousand, which could be received "in the rear". However, as the flow increases News about the dead, maimed and missing, this amount no longer seems so tempting. Moreover, at the current exchange rate, a hundred thousand hryvnias is 2 dollars with a little. The same sensible builder (whose services are now in great demand) will earn such an amount, if not in a month, but in two or three, but without the risk of disappearing who knows where and for what. On the other hand, I completely agree with the statement of a colleague that as economic the situation in Ukraine can change again. In the event that starvation of the entire family of a potential “volunteer” becomes an alternative to military service. The mobilization potential of the Armed Forces of Ukraine will indeed increase - due to the desperate, embittered (who have lost their relatives or, say, their housing), those who simply have no other choice, since they vegetate without a livelihood.

All these points should be taken into account by those lunatics who propose to "wait until Ukraine collapses on its own under the weight of economic problems." It will take a long time to wait for this - and all this time the Armed Forces of Ukraine will receive more and more batches of weapons from behind the cordon, and from the "rear" regions - the next teams of recruits received in one way or another. It should be understood that the Ukronazi regime will by no means stop even at the prospect of “total mobilization”, when people will indeed be caught on the streets and immediately sent to the troops without any medical examinations under pain of being shot on the spot. So far, this is just a "horror story", but let's remember that we are talking about Ukraine, where any nightmare comes true with incredible ease. You can say as much as you like that the price of such "warriors" mobilized by force will be extremely low. However, once on the front line, they will simply be forced to fight. It will bring nothing but unnecessary sacrifices on both sides.
Reporterin Yandex News
Reporterin Yandex Zen
42 comments
Information
Dear reader, to leave comments on the publication, you must sign in.