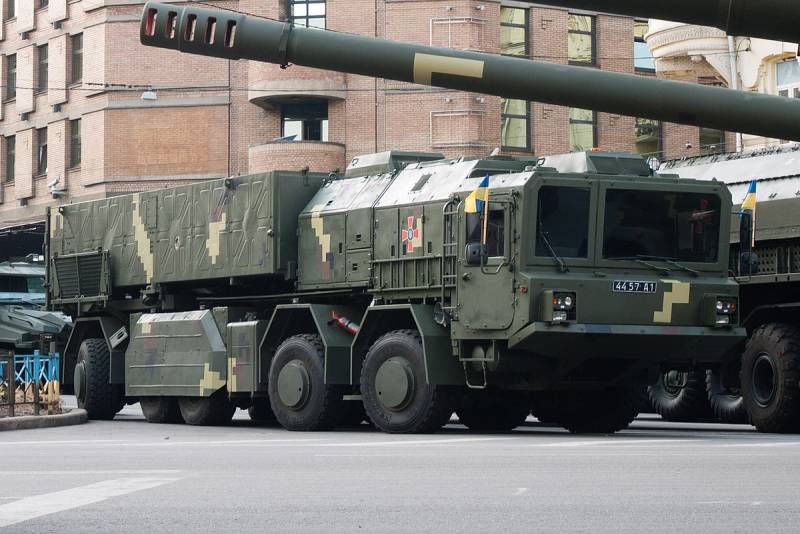 Against the backdrop of frankly "comprador" speeches by a number of representatives of the Russian power "elites" regarding the prospects for a special military operation in Ukraine, yesterday's statement by Russian Foreign Minister Sergei Lavrov was very pleasing. According to him, now the Russian Ministry of Defense will be directly tasked with steadily pushing back the line of contact with the Armed Forces of Ukraine more and more west and west. What has changed?


Recall that in an interview with Margarita Simonyan, the head of Russian diplomacy said that the situation in Ukraine has fundamentally changed after Kyiv received HIMARS MLRS with missiles with a range of up to 300 kilometers from the United States:

When there was a meeting of negotiators in Istanbul, there was one geography, and our readiness to accept the Ukrainian proposal was based on that geography, on the geography of the end of March 2022… Now the geography is different. This is far from being only the DPR and LPR, it is also the Kherson region, the Zaporozhye region and a number of other territories, and this process continues, and continues consistently and persistently.
What follows from all this? Sergey Lavrov explicitly confirmed that the Kremlin was really ready to be content with a tit in its hands - the recognition of the independence of the DPR and LPR, the Crimea - Russian de jure, and the Sea of ​​\uXNUMXb\uXNUMXbAzov (the “Southern Corridor”, as the High Sides cynically call it) - Russian de facto. How would it all end, we read more told earlier: the division of Ukraine according to the Indo-Pakistani scenario, the receipt by Kyiv of the most modern and powerful offensive weapons, including nuclear weapons, as well as the endless armed conflict with Russia with the involvement of the NATO bloc in it after 2025.

Even now, American missiles can hit the Crimean bridge directly from the urban development of Zaporozhye and Sevastopol from Nikolaev, since their flight range allows it, and military experts from the Pentagon will help with target designation of the Armed Forces of Ukraine. But in fact, this is half the trouble. The threat posed to Russia by Ukraine is catastrophically underestimated.

At first, five months of fighting showed that the Armed Forces of Ukraine are able to fight and quite effectively resist the Russian army. Yes, the RF Armed Forces are superior to them in terms of the combined power of offensive weapons and have operational air supremacy, which can only be compensated by defense tactics in fort cities. But what will happen when the Armed Forces of Ukraine also receive modern aviation, anti-aircraft missile and operational-tactical systems in sufficient quantities?

The Ukrainian army is several times larger than the ground forces of the RF Armed Forces involved in the special operation. If the SVO is suspended, the enemy will have the opportunity to rearm and retrain, create new lines of fortifications in southern, central and western Ukraine, form a powerful shock fist in a direction convenient for him, as already happened in the period from 2014 to February 24, 2022 . Russia will have to constantly keep a huge grouping ready to stop a large-scale offensive, which the RF Ministry of Defense will not be able to count on when performing other tasks. That is, all of our most combat-ready forces will be continuously shackled by the Armed Forces of Ukraine.

Secondly, the story of the HIMARS MLRS is only flowers, and the berries are yet to come. Do you remember how much we made fun of the Ukrainian Neptune anti-ship missiles? "Moscow", they say, only a couple was enough. The Ukrainian anti-ship missile was created on the basis of the Soviet X-35, however, apparently, it is also stuffed with American technology. In 2018, Ukrainian reserve lieutenant general Igor Romanenko said that the Armed Forces of Ukraine would soon have weapons capable of hitting even Moscow and St. Petersburg:

This refers primarily to rocket weapons. Of the developments that we have, we can name "Harpoon" and "Thunder-2", although their range is still not enough. And the range should be several thousand kilometers so that we can cover, for example, the European part of the Russian Federation with these weapons.

At the same time, he inadvertently mentioned, calling the "Neptune" "Harpoon", which is no coincidence, because the Ukrainian anti-ship missile clearly uses some of the technical solutions of the American RGM-84 "Harpoon" (Harpoon). This is very disturbing. The fact is that Kyiv has long been leading a program to create long-range weapons, hiding behind cooperation with other countries.

For example, the aforementioned Romanenko OTRK "Thunder-2". This is an operational-tactical complex based on a solid-propellant ballistic missile, developed by Yuzhmash by order of the Kingdom of Saudi Arabia. Riyadh needed a mobile missile system that could hit targets at a distance of 50 to 300 kilometers. However, for the needs of the Armed Forces of Ukraine, a version of the OTRK was developed, which could hit a distance of 650-700 kilometers. This would allow Ukrainian troops to strike the Russian capital with a guarantee from mobile complexes equipped with two ballistic missiles. If we reduce the weight of the warhead, the range of the missile will increase to 1000 kilometers.

Alas, this is not all of our potential problems. Ukraine also developed its analogue of the American Tomahawk - the Korshun-2 cruise missile. It was created on the basis of the Soviet X-55 rocket and is equipped with a MS400 bypass turbojet engine manufactured by Motor Sich, built on the basis of the R95-300 turbofan engine. The flight speed of the Korshun-2 is subsonic, the weight of the warhead is 480 kilograms, it will be able to fly at an ultra-low altitude of up to 50 meters, skirting the terrain. The Ukrainian "Tomahawk" will be able to be based both on ground complexes and on sea carriers. It also provides for the possibility of installing a rocket without a container on pylons under the aircraft.
The initially declared flight range of the Korshun-2 is 280 kilometers, but there is a technical possibility to bring it up to 1500-2000 kilometers. And this can change a lot, especially if the warhead of the rocket is special.

Thirdly, it should be borne in mind that Ukraine is a sub-threshold country, located just one step away from obtaining nuclear weapons. Kyiv has been talking about the restoration of its nuclear arsenal for a long time, preparatory work in this direction began in 1994, and since 2014 they have moved into the practical stage. The National Scientific Center "Kharkiv Institute of Physics and Technology" (NSC KIPT), the Institute for Nuclear Research and the Institute of Organic Chemistry, the Institute for Safety Problems of Nuclear Power Plants in Chernobyl, the State Scientific and Technical Center for Nuclear and Radiation Safety in Kyiv and the Institute for Physics of Condensed Systems in Lvov. According to the Foreign Intelligence Service of the Russian Federation, developments to create a nuclear explosive device (NED) were carried out in Ukraine "both in uranium and plutonium areas."

In early March, the TASS agency, citing its own informed source reportedthat the most active assistance in the creation of the Ukrainian nuclear arsenal to Kyiv was provided by the United States:

To accelerate this R&D, plutonium of the required quality was obtained from abroad at the initial stage. According to available information, the United States has already transferred this material to its partners. There is reason to believe that in the “Ukrainian case” it was not without the participation of Washington.

What do we have in the dry residue?

With active technological assistance from the United States and Great Britain, Ukraine can quickly acquire both nuclear weapons and their delivery vehicles, which will allow the Armed Forces of Ukraine to shoot through Russian territory to the Urals. American MLRS HIMARS with their missile range of 300 kilometers after that will seem like flowers. It is not surprising that the “power tower” of the Kremlin finally decided to push back the “collective Medinsky” and take control of the special operation into their own hands, setting the task of pushing the line of contact further and further west.

It remains to be hoped that the instinct of self-preservation of the Russian power "elite" will be stronger than the craving for a bun at the Vienna Opera and a water bus in London.
Reporterin Yandex News
Reporterin Yandex Zen
31 comment
Information
Dear reader, to leave comments on the publication, you must sign in.