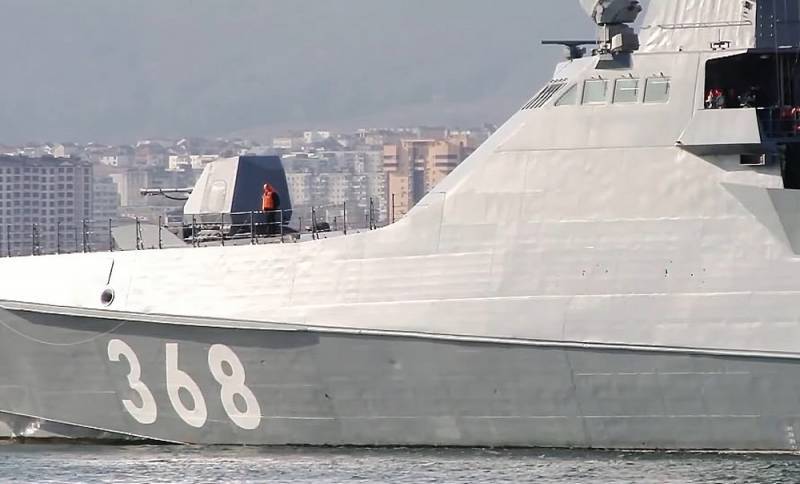 Russia is a country of contrasts, and sometimes it is difficult to understand it with the mind. The way the already small surface forces of the navy are distributed raises a lot of perplexed questions. Almost unarmed and defenseless patrol ships are being built here for the Russian Navy, and formidable frigates are serving in the FSB Coast Guard. Why this happens, let's try to figure it out.

Only the lazy have not yet trampled on the patrol ships of project 22160. In the course of a special military operation to demilitarize and denazify Ukraine, it turned out that these ships, poorly armed and completely defenseless against missile attacks, nicknamed “doves of peace” for this, do not bring any real benefit in the Black Sea.
It got to the point that ground-based Tor-M2KM air defense modules had to be hoisted and chained onto their helipad deck, just to give the ship a semblance of a chance to survive an air raid or an anti-ship missile launch. In the domestic press, this lewdness was tolerantly called the “air defense corvette”.

Enthusiasts from the fleet are now proposing to somehow re-arm them: install the Shtil air defense system, the Paket-NK light anti-aircraft defense system and deploy an anti-submarine helicopter. After that, it may turn out to be something capable of performing at least some auxiliary tasks as part of a ship strike group. However, this decision cannot be called anything other than the word "ersatz". The reason is simple - from a patrol ship built using civilian of technologies, trying to mold a real warship.

Alas, this is simply impossible, and the Ministry of Defense of the Russian Federation finally decided to say goodbye to this dubious idea, limiting the series to only six ships originally ordered. In fact, 36 billion budget rubles were thrown to the wind. But, perhaps, the "doves of peace" will still find application, even if not in the navy?

This is the time to remember about other Russian ships, which are also used not quite for their intended purpose. This is the project of patrol ships 11351 "Nereus". We have already touched on this topic in part, telling about the project of the frigate 11356 "Talvar", developed by the Nevsky Design Bureau for the needs of the Indian Navy.

It is based on the Soviet patrol ship of project 1135 (1135M, 11352 and 11353) of the near and far sea zone Burevestnik. One of the representatives of this series, the Selfless TFR, became famous for the fact that the American cruiser Yorktown was expelled from the territorial waters of the USSR using the bulk method. For their time, the Petrels were exceptionally successful anti-submarine frigates, surpassing American frigates in many performance characteristics.

On the basis of this project, project 1135.1 "Nerei" was developed for the needs of the Border Guard Service of the KGB of the USSR. Its main task was to control the 200-mile sea economic zone in the Far East and North. High speed and excellent seaworthiness have made these patrol boats outstanding in their class. However, for simple patrol ships, these ships are too heavily armed, and for full-fledged warships, they are underarmed. These include, for example, the former Ukrainian flagship Hetman Sagaidachny, which was flooded in Nikolaev. On the basis of the successful 1135.1, the Indian frigate of project 11356 "Talwar" was created, and that, in turn, formed the basis of the Russian frigates of the "admiral series" of project 11356R.

Currently, the Naval Forces of the Coast Guard of the Border Guard Service of the Federal Security Service of the Russian Federation have only two patrol ships of the Nerey code - the Dzerzhinsky PSKR and the Eagle PSKR. Both serve in the Pacific Ocean, detaining Russian and Japanese poachers, inspecting violating ships.

Taking into account their excessive armament for conventional patrol ships and the acute shortage of large surface ships in the Russian Navy, the possibility of transferring the Orel PSKR to the Black Sea Fleet of the Russian Federation or using it as a donor for the repair of ships of the Pacific Fleet of the Russian Federation has long been considered. The second option is clearly inappropriate in view of the situation in which the Russian Navy finds itself today. However, there is a rational grain in the idea of ​​transferring patrol ships from the Coast Guard to the Navy. Both surviving Nereus can be repaired, upgraded and put into service, turning them into quite decent anti-submarine ships, in which we have an acute shortage.

Instead, the Coast Guard should be given out of sight all these awkward ships of project 22160. The frank delusion of the situation is that the “doves of peace” were originally developed specifically for the naval units of the Border Guard Service of the FSB of the Russian Federation, and not for the Navy. The Black Sea Fleet of the Russian Federation managed to push through a series of six almost unarmed and defenseless patrol ships at once through a scheme worthy of a serious check by law enforcement agencies. In principle, the “doves of peace” are incapable of fighting, but catching poachers (pirates) is something that they can really do, bringing at least some benefit to the country.