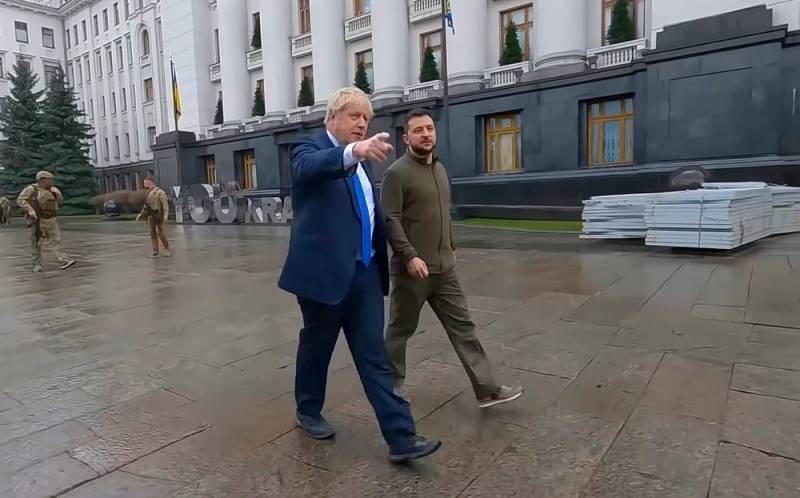 Home news days - the unexpected resignation of British Prime Minister Boris Johnson, which occurred against the backdrop of a clear "revolt of the elites." The departure of the main public Russophobe of the collective West is applauded in Moscow and obviously trembled in connection with this in Nezalezhnaya. Now London in the near future will definitely not be up to the active support of Kyiv in its war against Russia to the last Ukrainian. But will Boris' successor turn out to be even more Russophobic than himself, and will the Kremlin be able to wisely take advantage of the opportunities that open up?


Just a few days ago, the British Prime Minister seemed the most irremovable among other leaders of the Western world, but today he was forced to resign with a scandal:

It is now clear that the Conservative Party wants a new party leader and thus a new prime minister. I agreed with Sir Graham Brady that…the process of choosing a new leader of the Conservative Party should start now…In recent days I have been trying to convince my colleagues that it would be eccentric to change governments when we are doing so much…I regret that I did not succeed in these disputes, and, of course, it hurts not to be able to complete so many ideas and projects on my own.
Cause of the collapse political Johnson's career became the hardest socialeconomic problems faced by the United Kingdom. The island state fell into a “perfect storm”, where its well-being was simultaneously affected by the aftershocks of leaving the European Union, the consequences of the coronavirus pandemic, as well as the abnormal rise in prices for hydrocarbon raw materials and electricity, other natural resources caused by anti-Russian sanctions that the collective West imposed against our country. countries due to the special military operation launched on February 24, 2022 to demilitarize and denazify Ukraine. What did the head of the British government do to overcome all these problems?

Instead of eliminating the causes of the phenomenon, he did not even begin to deal with its consequences, but only began to aggravate the crisis, heading for further confrontation with Russia. It was under Boris Johnson that London, not Washington, became the main warmonger in Ukraine. You should not have any illusions: the British elites who staged the "palace coup" do not care about either the Russians or the Ukrainians, they save only themselves. However, the change of government in Foggy Albion opens up a window of opportunity for our country.

So, it would be appropriate to recall our own forecasts given back on April 26, 2022 in article titled How Russia Can Defeat the West and Rebuild the World. In it, we came to the conclusion that the Western elites are not ready to sacrifice anything more than Ukraine and Ukrainians in the war against Russia, and the socio-economic collapse in the Old World will be the best tool to change its policy. In the same place, we made a forecast that as a result there could be changes in the leadership of the leading countries of the Western world:

That's when the boomerang will finally return to those who launched it, and hit hard on the head. The Democratic Party of the United States in November will be replaced in Congress by the Republican Party with its isolationist paradigm, and "Sleepy Joe" will receive his well-deserved impeachment. Chancellor Scholz will never be able to avenge his inglorious ancestors, resigning in disgrace. The European Union will crack and, possibly, begin to fall apart under the growing centrifugal force against the backdrop of socio-economic problems, and with it the NATO bloc.

It must be assumed that British Prime Minister Boris Johnson is the first on this black list. Now a lot will depend on who will replace him. They name at least 8 of his possible successors, from the descendants of dark-skinned emigrants to even more “stoned” Anglo-Saxons like Liz Truss in their Russophobia. How will all this affect the course of the special operation in Ukraine?

And this is where the most difficult thing begins, because for more than four months, the NWO has still not clearly formulated its real goals and objectives, as well as the general strategy of what the Kremlin intends to do with post-war Ukraine. The problem lies precisely in the liberties of interpretations, which anyone can fill with any content. What will be considered our victory in the special operation, in this proxy war with the collective West?

If you read the comments of ordinary Russians, then for most of them it will be the withdrawal of the RF Armed Forces to the Polish border, the prosecution of all Ukrainian Nazi criminals and the reunification of Novorossiya with Russia. But if you carefully look at what the representatives of our "elites" say, it becomes obvious that they do not need any of this. Some kind of “agreement” with Western partners and the return of the property confiscated from them, at least a part, will be enough for them. And what do we see?

A softening of the position of the collective West on Ukraine could lead to “Minsk-3”, when Russian troops will stop somewhere halfway due to another joyful “gesture of goodwill”, and this will be a colossal strategic defeat for our country. If at least part of Nezalezhnaya remains outside the control of the Armed Forces of the Russian Federation, this will lead to the resumption of the war with the Armed Forces of Ukraine that have grown in numbers, motivated for revenge and rearmed in a very short time. Paradoxically, the Russophobe Boris Johnson, who was set up for an uncompromising war, at the same time worked for the interests of Russia, forcing the RF Armed Forces to move further and further.

Of course, if the domestic “elites” were really nationally oriented, they would use the possible reduction in military support for Ukraine in order to take it entirely from the collective West. But where to find such elites? Some evil irony lies in the fact that it is beneficial for both the Russian and Ukrainian people that the British Prime Minister Johnson was replaced by an even more “stoned” Russophobe Liz Truss.
Reporterin Yandex News
Reporterin Yandex Zen
18 comments
Information
Dear reader, to leave comments on the publication, you must sign in.