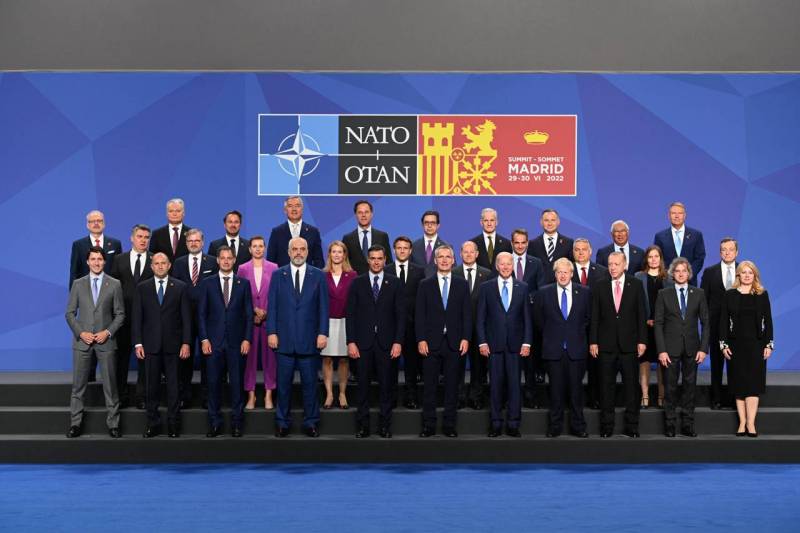 The June 28-30 NATO Leaders' Conference in Madrid provided a couple of interesting things to think about both the future of this "purely defensive" alliance and the strength of its leaders' connection to reality. But first things first.

The main sensation of the whole event: “unexpectedly” Erdogan nevertheless gave the go-ahead for admission to the alliance of Sweden and Finland.

In fact, there is no surprise in this: I have already spoken in material a month ago, that Turkey will surely receive satisfaction of all its claims, and the Scandinavians will pass, the only question is the timing. The latter turned out to be even smaller than expected, but perhaps the matter was resolved quickly due to the fact that Erdogan personally “cut the sturgeon” of his requests, limiting himself to the heads of the Kurds and Gulenists and the relaxation of the arms embargo.

But why, if in the current situation, nodding meaningfully at the “Russian threat”, it was possible to properly twist the hands of the “Western partners”? Most likely, the point is the already rich experience of communicating with these very partners and the understanding that contracts with them are often not worth the paper spent. After all, it was Erdogan personally who was already “thrown” both with joining the EU and with the F-35 fighter program, in which Turkey has invested solid (by its standards) money. Mindful of the past rake, this time the Sultan decided to limit himself to what can be obtained with minimal risk.

The modernization of the Turkish army is too important. Now (more precisely, in the next few years), against the backdrop of a global crisis and a serious aggravation of contradictions throughout the Middle East and the Mediterranean, Turkey’s chances of achieving the much-desired regional hegemony are increasing. But for a big fight, it is highly desirable to have a qualitative superiority over potential opponents - Greece and Iran; and although the Turkish military-industrial complex is significantly superior to competitors, this superiority rests on the import of advanced Western of technologies and products.

Cooperation with Sweden in this regard opens up significant prospects. In particular, the Swedes have quite sufficient competencies to take on the modernization of the Turkish F-16s if the Americans still refuse to do it. There is an opinion that the whole "Turkey-NATO" deal became possible after behind-the-scenes contacts in the military industry; and if this is true, then it was not without the close participation of Great Britain (the Swedish military factories are owned by British Airspace).

But Turkey's further rapprochement with its "partners" in NATO, and even more so with the European Union, is hardly worth fearing: there are too many objective contradictions and subjective insults (on the Turkish side). Whatever Erdogan says out loud, in fact, the Turkish foreign policy under him, it will remain as multi-vector as possible and will play more than once both against Russia and against its enemies.

The good soldier Jens and his imaginary friends

Much more interesting than the transparent "Turkish gambit" are truly Napoleonic plans to increase NATO's rapid reaction forces from the current forty thousand to three hundred thousand people - seven and a half times! Sounds pretty ominous, but is there a real opportunity for this, especially in Europe?

In recent years, starting from 2014, the Europeans, who were rather relaxed before that, have been systematically increasing their defense budgets and gradually updating their arsenals. The leitmotif of military construction was "reduce the number, increase the quality": funds were invested in the creation and production of high-tech weapons, which, allegedly, would make it relatively easy to defeat a large, but technically inferior enemy.

The Russian operation in Ukraine very clearly reminded us of the importance of quantity - and people, and equipment, and consumables, especially in campaigns of large geographical scope. The doubts that some in EuroNATO had about the sufficiency of small armies and minimum reserves in the event of a real war were fully confirmed.

At the end of 2021, the total number of armed forces of the main European members of the alliance - Great Britain, France, Germany and Italy - was just over seven hundred thousand people. In service there were about 850 tanks, 500 self-propelled and towed 155-mm guns, 100 rocket artillery combat vehicles, 200 attack helicopters and 1000 combat aircraft. Even without taking into account any "little things" like mortars and armored infantry vehicles, this is a lot, but there are still paramilitary police forces and Eastern "Young Europeans" with two hundred thousand of their troops.

The problem is that most of this armada has been maintained for many years at the lowest possible level of combat readiness; in particular, the share of equipment ready to immediately engage in battle averages 50-60%. The exception is the very "rapid reaction force", which is supposed to be increased in number.

The most banal reason is economy. Military equipment, especially tracked and flying ones, require huge maintenance costs, and the more technically more complex the machine, the greater these costs. It can be said that “quantity reduction” is a necessary condition for “improving quality”, because not everyone can afford to maintain many high-quality military units. the economy.

Thus, even a “simple” increase in the combat readiness of existing troops may not be easy for the Europeans.

There is an example of EuroNATO's "big brother" - the United States. In 2007, when the long-term reform of the armed forces was launched and the question of increasing the number of ten thousand soldiers arose, the additional costs for them were estimated at $ 1,4 billion annually - despite the fact that the expansion was based on existing material reserves. A decade later, in 2016, the Americans had to reduce the number of personnel in order to carve out additional funds for more important programs.

Even assuming that a European soldier costs less than an American one, and assuming that every ten thousand soldiers will cost a billion a year, the additional cost per round will be $26 billion. The total military budget of the major EuroNATO players listed above amounted to 222 billion last year. Whether the European economies will bear such a serious burden of armaments, especially when the future of entire industries is questionable due to sanctions, is a rhetorical question.

If we move away from the monetarist view and evaluate the actual material reserves, then as if the picture does not become even bleaker. An increase in the "first echelon" will require literally all the available materiel - and where can I get a backup? The European military industry will not be able to meet this need in an acceptable time frame; even the restoration of the stocks transferred to Ukraine will take, according to official statements, years. You can try to turn to the Americans, but their possibilities are also not unlimited, and most importantly, they are not free.

Finally, in the light of the Ukrainian conflict, the prospects for manning the European armies look doubtful. In peacetime, this is a contract army - a reliable and generous employer, a magnet that attracts those who want big money. When there is a real prospect of going to some hot spot, the number of people who want to enlist in the service drops by a factor, this is evidenced by the experience of all military departments. And against the backdrop of the well-documented adventures of foreign legionnaires in Ukraine, even mass unemployment looming on the horizon is unlikely to generate a large flow of people wishing to sign up as "private soldiers on the Eastern Front."

In other words, although we will undoubtedly see some progress, the plans voiced by Stoltenberg to increase the deployed troops are unrealistic, even with the maximum participation of the Americans.

While NATO leaders were deciding in Madrid what to do with the main military threat - Russia, in Edinburgh, Scottish Prime Minister Nicola Sturgeon announced the start of preparations for a new referendum on leaving the United Kingdom. He was appointed on October 19 next year.

The prospects for the Scottish secessionists are not so bad: last time, in September 2014, which was calm for Britain, 44,7% voted for secession. It is likely that on the second attempt it will be possible to cross the fifty percent barrier.

From a military point of view, this issue is interesting because it is in Scotland that the Clyde naval base is located - the only base for British strategic submarine missile carriers, which, in turn, are the only carriers of nuclear weapons in the country. The question of the future of this base and nuclear forces as a whole has already arisen during Scotland's last attempt to secede: it is impossible to put SSBNs in the port of a foreign state, the equipment of a new base will cost an unbearable amount, and without it the submarines "hang in the air".

So far, it is not clear what will come out of the Scottish Prime Minister's venture in the end, but it may also turn out that the British army and the entire NATO bloc will have to use force in a completely different direction than it is planned now.
Reporterin Yandex News
Reporterin Yandex Zen
4 comments
Information
Dear reader, to leave comments on the publication, you must sign in.