"Gesture of good will": Why Russia completed a special operation on Zmeiny Island 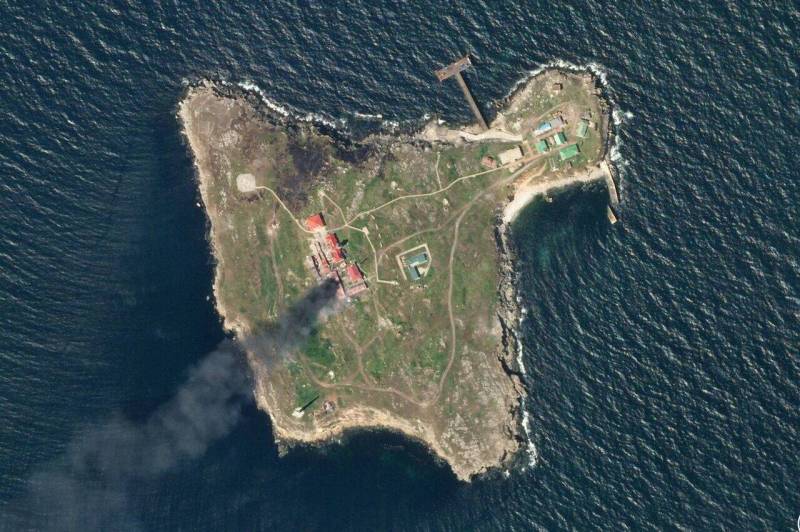 On the fifth month of the special military operation for the demilitarization and denazification of Ukraine, another, already the second "gesture of good will" took place. The Ministry of Defense of the Russian Federation announced the completion of all assigned tasks and the withdrawal of Russian troops from Snake Island. What is happening causes rather mixed, but very strong feelings.

The official version of this decision, voiced by the representative of the Ministry of Defense of the Russian Federation Igor Konashenkov, is as follows:

On June 30, as a step of goodwill, the Armed Forces of the Russian Federation completed their assigned tasks on Zmeiny Island and withdrew the garrison stationed there... It has been demonstrated to the world community that the Russian Federation does not hinder the efforts of the UN to organize a humanitarian corridor for the export of agricultural products from the territory of Ukraine.
Again this "good will"! Recall that last time, under this plausible pretext, Russian troops were withdrawn from Kyiv back to Belarus and transferred to the Donbass. This was done allegedly with the aim of "improving the negotiating position" in the framework of the negotiation process in Istanbul with the regime of President Zelensky. The true reasons, most likely, were somewhat different.

At first, the Armed Forces of Ukraine simply did not leave Moscow a choice, destroying the infrastructure through which the DPR and LPR received water. The problem of water supply, if we take into account the constant shelling of Donetsk from Avdiivka, Marinka and Pesok, remains the most painful for the people's republics of Donbass.

Secondly, there was simply no point in staying near Kyiv. The plan to force the Zelensky regime to capitulate with a swift rush to the capital did not work, since the Anglo-Saxons did not allow him to “merge”. It is possible to take a huge metropolis with a population of many millions only if it is wiped off the face of the earth with the corresponding casualties among the civilian population. It is simply suicidal to stand near the Ukrainian capital, dependent on supplies on a thin thread of a road passing through rough terrain, where the DRG and enemy special forces will work.

That is why they left Kyiv, concentrating on more pressing tasks. However, the complete withdrawal of all Russian troops from Northern Ukraine without creating a security belt along the border was a strategic mistake, since the "massacre in Bucha" immediately took place, which was blamed on the RF Armed Forces, which became the reason for the start of the supply of heavy offensive weapons to the Armed Forces of Ukraine from NATO countries, and border Russian regions began to be subjected to systematic shelling and air attacks.

And now "goodwill gesture" number two. A plausible pretext was again chosen - ensuring the safe export of grain from Ukrainian ports. However, let us doubt that this was the decisive factor.

It is worth recalling that all food grain was taken out of Nezalezhnaya literally on the eve of the start of a special military operation, in February 2022. Now in Ukraine there is only feed grain that European farmers need to feed their cattle, as well as sunflower and other agricultural crops. All this is being continuously exported, despite the special operation: along the carefully guarded railway in Western Ukraine to Poland and in transit through neighboring Moldova and Romania. In addition, President Vladimir Putin personally suggested that the “Western partners” use the ports of Berdyansk and Mariupol already occupied by the Russians to export Ukrainian grain, as well as Kyiv to clear mines from the largest seaport, Odessa:

It was not we who mined the approaches to the port, it was Ukraine who mined them... Let them clear mines and, please, let ships with grain leave the ports. We guarantee their peaceful passage without any problems into international waters. There is no problem please. They must clear mines and raise ships from the bottom of the Black Sea, which were deliberately sunk in order to make it difficult to enter these ports in the South of Ukraine. We will not take advantage of the demining situation to launch any kind of attack from the sea.
And what's with Snake Island? In fact, he has nothing to do with it.

This small island was occupied by the Russian military on the very first day after the start of the special operation, and Ukraine has been trying to recapture it all these months. Why this small piece of land, located 30 kilometers from the coast of the Odessa region, 45 from Romania and 120 kilometers from Odessa in the northwestern part of the Black Sea? Then, from its territory, the Russian Navy can organize a point for long-range radar monitoring of what is happening in the Romanian and Ukrainian skies, and the Ukrainian Navy, having beaten it back, can place strike complexes with American-made Harpoon anti-ship missiles on it, which with direct fire almost reach Sevastopol and cover a huge part of the Black Sea area.

Alas, we have to admit that Russia lost this confrontation for Serpent Island. About how difficult it was to keep it and supply our garrison, we detail told the day before. Everything rested literally on the personal courage and heroism of the Russian sailors, who had to perform combat missions under fire from long-range cannon artillery and ballistic missiles from the territory of the Odessa region. A miracle did not happen ... As soon as the Armed Forces of Ukraine received the French self-propelled guns CAESAR and transferred to the southern direction of the Tochka-U OTRK, the density of fire became such that it became simply impossible to be on a tiny island. Unfortunately, the abandonment of Serpentine was a foregone conclusion, and, alas and ah, Kyiv will now be able to record this as an image victory for itself.

There are very, very many questions for the leadership of the Russian Navy, how and for what kind of war at sea it was preparing, but in fact the Black Sea Fleet lost it to a country that practically does not have any fleet. It was enough to have a few normal corvettes, better than frigates, as well as aircraft or AWACS UAVs to control Zmeiny and the entire adjacent water area, but what is not, is not. Serpentine left, Ukrainian propaganda beats the drums.

The question is - what will the command of the Black Sea Fleet do now if, or rather, when coastal missile systems with the Harpoon anti-ship missiles, covered from air attacks by air defense systems, appear on this island?
Reporterin Yandex News
Reporterin Yandex Zen
50 comments
Information
Dear reader, to leave comments on the publication, you must sign in.