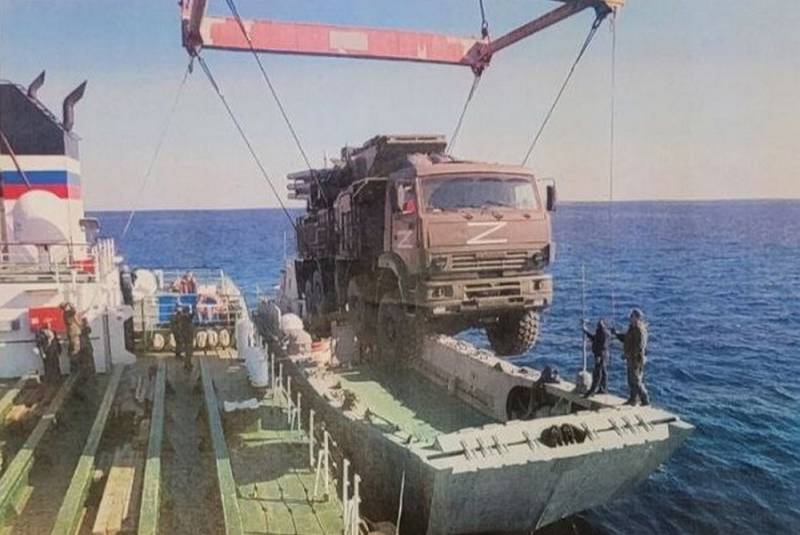 The months-long battle for Zmeiny Island will undoubtedly become one of the most important milestones in the military history of Russia. Still, our "great land power", as they are stubbornly trying to position it in some circles, had to really fight at sea! The loss of several ships by the Black Sea Fleet of the Russian Federation involuntarily forces us to rethink the concepts artificially imposed on us.

Snake Island is a small piece of bare land, located about 35 kilometers from the mainland of the Odessa region and 120 kilometers from Odessa itself. He passed under the control of Russia on the very first day after the start of a special military operation. At the same time, one of the myths of Ukrainian propaganda was born: the border guards who allegedly refused to obey the demands of the cruiser Moskva to surrender were villainously bombed by the “Russian orcs”, for which they received the title of “heroes” posthumously. True, it soon became clear that all Ukrainian border guards were alive and eating off in captivity, and were later exchanged for Russian prisoners of war, but who in Nezalezhnaya is embarrassed by such trifles?

After that, the Snake Island itself turned into a source of constant informational occasions. The Armed Forces of Ukraine, with the support of aviation, periodically conduct fierce attempts to recapture it, leaving for slaughter aircraft, manned and unmanned, the remnants of their Navy and the elite of the special forces. The Russians successfully repel all these attacks, which we will discuss in detail later. However, it is necessary to understand why Kyiv needed this small piece of land in the northwestern part of the Black Sea and why Moscow is now holding on to it so much.

The strategic importance of the Serpentine is determined by its convenient geographical location. Just 45 kilometers from the island is a country - a member of the NATO bloc Romania. During Soviet times, it was equipped with a radar company of the air defense forces and a special detachment of the coastal surveillance system of the Navy, which monitored the activity of the North Atlantic Alliance in the region, controlled the airspace and covered the approaches to Odessa. Under Ukraine, the Burevestnik-1 radar station operated on the island. After the outbreak of the armed conflict, the significance of the Serpentine has increased dramatically.

On the one hand, it is important for Russian troops to monitor activity in the sky over Romania, which is used by Ukrainian military aviation. The tragic death of the Moskva missile cruiser, which the Russian Navy used as a distant radar observation post near the coast of the Odessa region, may be connected precisely with this circumstance. On the other hand, the Armed Forces of Ukraine have now received Harpoon anti-ship missiles and other long-range multiple launch rocket systems from their Western collaborators. By placing them on the island, they will be able to target almost half of the Black Sea, effectively locking our fleet in Sevastopol. This should not be allowed in any case, which is why such fierce battles are going on for the Serpentine.

On the night of May 8, 2022, the Armed Forces of Ukraine threw into battle aviation, manned and unmanned, as well as armored assault boats of project 58181 Centaur for landing. Russian troops managed to repulse this attack, destroying three Ukrainian Su-24 bombers and one Su-27 fighter, three Mi-8 helicopters with troops on board, one Mi-24 helicopter and 29 drones, including eight Bayraktar TB2 attack drones, as well as three armored boats. with paratroopers. Another large-scale attempt to capture the island was made on 21 June. More than a dozen Bayraktar TB2 strike UAVs participated in it, and Zmeiny himself was subjected to massive fire from Tochka-U ballistic missiles, Uragan multiple launch rocket systems and American-made M-155 777-mm howitzers from the coast of the Odessa region. Apparently, the target designation data of the Armed Forces of Ukraine was given and fired by the US Air Force's Global Hawk RQ-4 strategic reconnaissance drone.

This attack was also successfully repulsed, and the Ukrainian landing did not take place. However, behind the dry lines of the report of the Ministry of Defense of the Russian Federation, it is not clear what is actually happening on Zmein, in what conditions the Russians have to heroically defend a tiny piece of land, which is under direct fire from rocket and cannon artillery of the Armed Forces of Ukraine and air strikes of the Air Force. And about this рассказал Deputy of the State Duma of the Russian Federation, Lieutenant General of the Reserve Andrey Gurulev, former commander of the 58th Combined Arms Army, deputy commander of the Southern Military District. From the details of the defense of the Serpent involuntarily, the hair stands on end.

Thus, the main danger to the Russian garrison comes from the air. During the May attack, our Tor-M air defense system was destroyed. To compensate for the loss, the DK-701 landing craft with the Tor-M2 air defense system was sent to the island, but it was destroyed by the Armed Forces of Ukraine along the way. The command of the Black Sea Fleet set the task of loading anti-aircraft systems directly into the sea onto landing craft using the SPK-54150 self-propelled floating crane. However, the crew of a civilian vessel refused to take part in all this due to the lack of social guarantees. Major General Mikhail Yasnikov, Deputy Fleet Commander for MTO, had to personally go home to the crane operator and convince him of the need to help our guys on Zmein.

Having achieved his goal, the major general, together with the crane operator, arrived at the floating crane. ZRPK "Pantsir-S" was overloaded onto the landing craft, but due to the loss of stability, he rolled. Then Yasnikov decided to secure the boat with the slings of a floating crane and go to Zmeiny so, but 9 out of 12 civilian crew members rebelled. Even the brave crane operator refused to go under the blows of "Points-U". The Major General had to personally master the management of the crane installation in 1 hour and take full financial responsibility. This bunch went to the island under the cover of air defense systems installed on conventional support vessels. 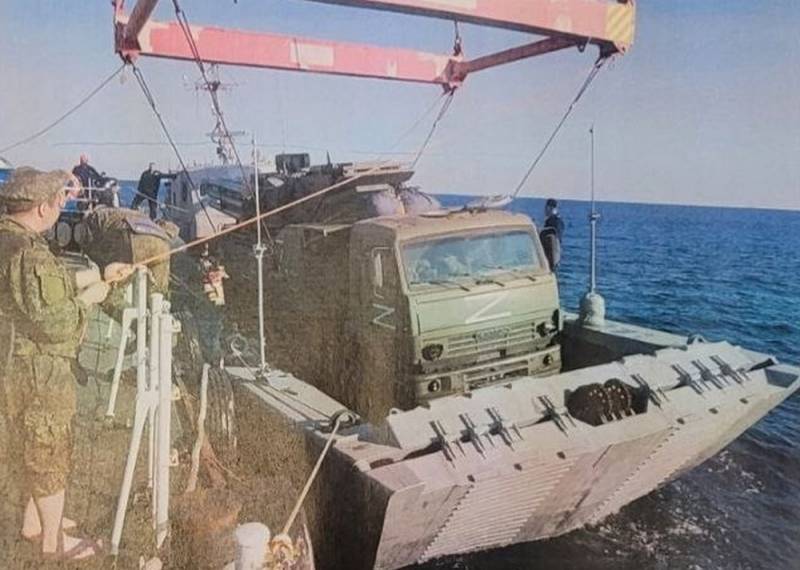 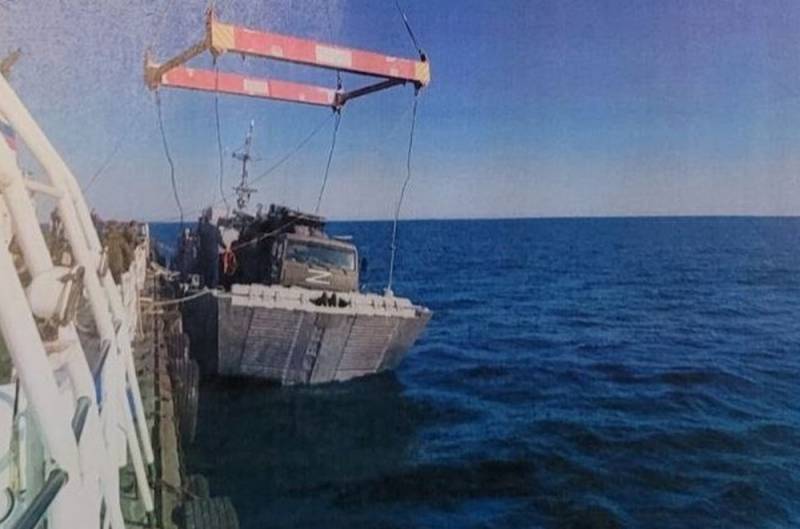 When approaching the Serpentine Armed Forces, they attacked the floating crane of the Tochka-U OTRK, but, fortunately, they missed. The unloading of the "Shell" was carried out personally by the deputy commander of the fleet, Yasnikov, in just 20 minutes, and after another 20 minutes, this ZRPK had to repel an air attack from another "Tochka-U". Then the brave major general unloaded the Tor-M2 air defense system from the deck of the landing craft, and then the APU was released on the floating crane of the Neptune anti-ship missile system. The same Pantsir-S1 air defense missile system was able to intercept the Ukrainian missile at the last moment.

The heroism of Mikhail Yasnikov, as well as other Russian military men who hold the defense of Zmeinoye in such conditions, is simply amazing. The garrison of this ill-fated island deserves the highest awards. It remains only to understand why our military again have to perform real feats, covering up the failures of the authorities in their preparation.

What do we see? Problems with long-range radar reconnaissance. Shortage of combat-ready surface ships in the Black Sea (and not only) fleet. Problems with sea-based air defense, because of which you have to improvise, turning unarmed "peace doves" into "air defense corvettes", or even support vessels that are not adapted for combat operations. In the Black Sea, at least 4-6 full-fledged corvettes of projects 20380 (20385) are needed, of which a couple would be enough to confidently hold the Serpent. But they are not there, and our major generals have to personally unload land-based air defense systems and air defense systems under fire from Tochek-U and Neptune anti-ship missiles. And we have de facto nothing to make a landing near Odessa.

This is what happens when the concept of a “great land power” is forcibly promoted to the detriment of a modern, combat-ready fleet. And, as you can see, sometimes you really need it. Who would have thought six months ago that real military operations would take place in the Black Sea, but they are going on, and we are suffering heavy losses, and failures in preparation have to be covered up by personal heroism at the level of the deputy commander of the fleet. And what will happen, for example, in the event of a clash over some other islands, say, the Kuril Islands, with Japan and the United States standing behind them, which recognize Japanese sovereignty over the "northern territories"? Tokyo "glazed"? Oh well. Immediately after Kyiv, Warsaw and London.
Reporterin Yandex News
Reporterin Yandex Zen
69 comments
Information
Dear reader, to leave comments on the publication, you must sign in.