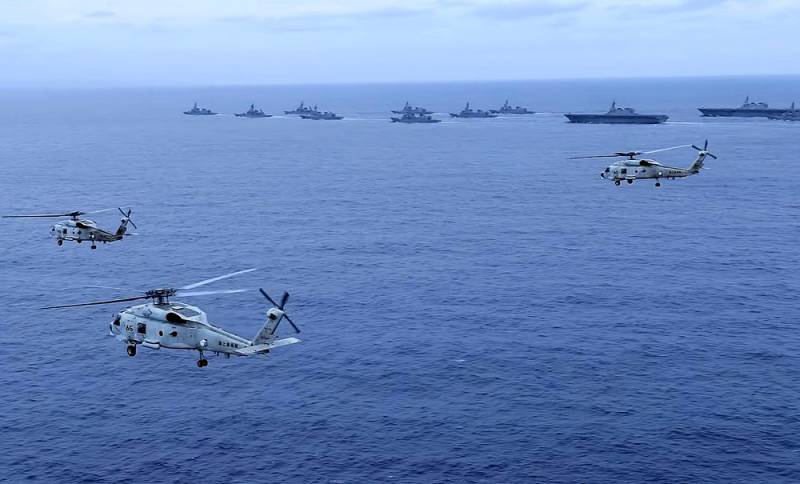 Today, all our attention is drawn to the fierce battles on the territory of Ukraine, in which a significant part of the ground forces of the RF Armed Forces is involved in one way or another. Also of great concern are the obvious attempts by some of our "Western partners" to draw Russia into a direct armed conflict with the NATO bloc due to a partial blockade of the Kaliningrad region. But right now, a military threat of no lesser magnitude is brewing on the Eastern Front.

We are talking, of course, about Japan, the turning point in relations with which is the Kuril Islands. Despite the fact that they became part of the USSR, and then the Russian Federation following the results of World War II, and their legal status is enshrined in relevant international agreements, Tokyo still considers them to be its “northern territories” and demands to be returned. In Russia, this topic was periodically raised, but always stumbled over the categorical rejection of the absolute majority of the population.

The last time President Putin made a number of promising statements on this subject, Japanese Prime Minister Shinzo Abe was so enthusiastic that he even graciously promised not to evict the Russian "gaijin" from the Kuril Islands, clearly believing that he already had them in his pocket. It didn't grow. The reaction of the Russians to the issue of concluding a peace treaty with Japan at the cost of the Kuril Islands was so negative that the Kremlin quickly curtailed all public discussions on this matter. In the course of amendments to the Constitution of the Russian Federation in 2020, provisions were introduced prohibiting the exclusion of the territories of the Russian Federation, and the criminal law now has a serious responsibility for the corresponding appeals.

It would seem that everything, the issue is finally closed, but, alas, this is not entirely true. Having lost the fundamental opportunity to solve the problem peacefully, the Japanese faced a dilemma: accept and forget about the "northern territories" or return them, but not by peaceful means. And the international situation, unfortunately, more and more favors this.

After the start of a special military operation, Russia turned out to be a rogue country for the “Western world”, surrounded by a colossal amount of economic sanctions. Almost all the ground forces of the RF Armed Forces are now engaged on the Western Front, waging heavy and bloody battles in Ukraine. When and how it will all end is unknown. Ahead clearly looms the prospect of an armed conflict with the countries - members of the NATO bloc from Eastern Europe. At the same time, the conditional "Eastern Front" is significantly weakened. The flagship of the Pacific Fleet of the Russian Federation, the Varyag missile cruiser (a fellow project of the Moscow that died in the Black Sea), is now in the Mediterranean Sea together with the Admiral Tributs BOD, stopping the potential threat from the aircraft carrier strike formation of the NATO bloc. At the same time, tensions are gradually growing there, in the Far East, which was personally confirmed by the press secretary of President Putin Dmitry Peskov:

Japan takes a hostile position towards our country. But against the background of the frenzied mainstream, there are also attempts to soberly assess what is happening.
Attempts are the private opinion of individual Japanese parliamentarians. The mainstream of Japanese society is Russophobia and militarization, against which revanchist sentiments are only growing.

Time for a rematch?

Indeed, while Russia is bogged down in Ukraine and may be drawn into a conflict with the North Atlantic Alliance in the Baltics, this will be the most convenient time for the Japan Maritime Self-Defense Forces to blockade the Kuril Islands and land on them. Moscow will then have no other argument than the use of nuclear weapons, but will a missile attack on Tokyo really be launched? We have been at war with the Armed Forces of Ukraine for almost four months now, Russian territory is regularly shelled, "Western partners" are calmly supplying Ukraine with fuel and weapons, and so far neither Kyiv, nor London, nor Washington have "glazed" anything. The reality is that nowadays everyone prefers to fight without an official declaration of war at all, by conventional means, with obvious elements of a behind-the-scenes "agreement". Nobody wants to go to heaven ahead of schedule, which means that nuclear weapons are the most extreme option, by no means the first on the list for use.

Building long-term forecasts today, when every day something happens and everything is changing rapidly, is a thankless task. However, one can still try to imagine under what conditions Japan can decide on the "Anschluss" of the Kuril Islands. The unfortunate truth is that Tokyo has the ability to pull off something similar right now.

Yes, alas, but Japan has a significant military advantage over Russia in this potential theater of operations. Aviation "samurai", base and deck, will dominate the air in the area of ​​the Kuril Islands. At sea, the superiority of the Japan Maritime Self-Defense Force looks even more impressive: four helicopter carriers, two of which are currently being converted into light aircraft carriers capable of carrying American fifth-generation F-35B fighters, 10 URO destroyers, 28 multi-purpose destroyers, 8 frigates, 24 diesel electric submarines, as well as numerous modern anti-submarine aircraft. All this can quickly crush the few age-old surface ships and submarines of the Pacific Fleet, which has been “forgotten” for many years. The strengthening of the KTOF in Russia has begun only recently, but, to put it mildly, it is too late. The balance of forces is too unequal, the pace of building new warships is unacceptably long.

How much time do we presumably have left to prepare for war with Japan if the conflict on the Western Front becomes protracted?

Without claiming to be the ultimate truth, one can put forward the hypothesis that Tokyo will be fully ready when Russia weakens under the yoke of economic sanctions, suffers heavy losses in the war on the territory of Ukraine, and the Japan Maritime Self-Defense Forces will receive a combat-ready aircraft carrier strike force due to re-equipment their helicopter carriers. Just recently, the Japanese undertook to turn its sistership Kaga into a light aircraft carrier after the Izumo. The modernization will take place in two stages, the completion of the second is expected by 2027. 5 years is exactly the period when either Russia will win a convincing victory over the collective West, or the comprador "elites" will finally drive it into a historical dead end with their "agreements".

Suppose that we have these 5 years until the moment when Japan nevertheless decides to try to take the Kuriles by force. What can be done here and now to avoid similar problems in the near future?

As we have established empirically, even the presence of nuclear weapons, strategic and tactical, does not eliminate the need to be able to fight by conventional means, on land and at sea. Alas, Russia is in trouble with the navy, and this is especially felt in the Pacific Ocean, which worried military experts have been trumpeting for a long time. Something needs to be decided, but the objective reality is that one desire is not enough for warships to appear out of nowhere in sufficient numbers. The only way to get them quickly is to order construction in China, which we will discuss in detail told earlier.

After analyzing the layouts and reviews of military experts, we can conclude that it is vital for Russia to order a large series of patrol ships of the near and far sea zone. For BMZ, these should be PLO Type-056A corvettes in the amount of at least 20-25 units, for DMZ - Type-054A / P frigates, at least 10-15 units. China will be able to build them for export really quickly to meet the requirements of Russian customers. Thanks to the purchase of Chinese-made corvettes and frigates, the Pacific and other fleets of the Russian Federation will be able to radically increase the number of surface personnel in just 3-5 years, reliably cover the near and far sea zones. Russian shipyards should then focus on building project 8000M frigates with a displacement of up to 22350 tons, which will be our first modern destroyers.

It also makes sense to think about ordering China to build an export version of the Type-075 amphibious assault ships. They occupy an intermediate position between the French "Mistrals" and the American "Americas". With a full displacement of 40 tons, these UDCs are capable of transporting up to 000 marines, armored vehicles for landing, and also carrying an impressive air wing of 900-28 helicopters, anti-submarine, AWACS or strike helicopters on deck. We may be interested in the fact that in China the production of ships of this class has already been mastered and is being carried out at a rapid pace. So, the lead ship of the Type-30 Hainan series was laid down in 075-2018 (it is not known exactly), it was launched already in 2019, and in 2020 it became part of the PLA Navy. There are already two Chinese UDCs in service, the third is under construction.

The pace is impressive and compares favorably with how long the construction of two Russian project 22390 UDCs can take. Recall that they were laid down at the Zaliv plant in 2020, now it’s the middle of 2022, but so far there is not even a photo of the keel on the slipway. The Russian Navy will probably be able to actually get them only by the end of the decade. Perhaps it is worth ordering a Russified version of the Type-075 for the needs of the Pacific Fleet also at Chinese shipyards. The ability to deploy up to 900 marines and carry up to 30 anti-submarine or attack helicopters will significantly increase the military potential of the KTOF in the confrontation with the Japan Maritime Self-Defense Forces.

Well, or you can do nothing, let everything take its course, and meet the war on the "Eastern Front" without a combat-ready fleet and with unfinished ships.
Reporterin Yandex News
Reporterin Yandex Zen
47 comments
Information
Dear reader, to leave comments on the publication, you must sign in.