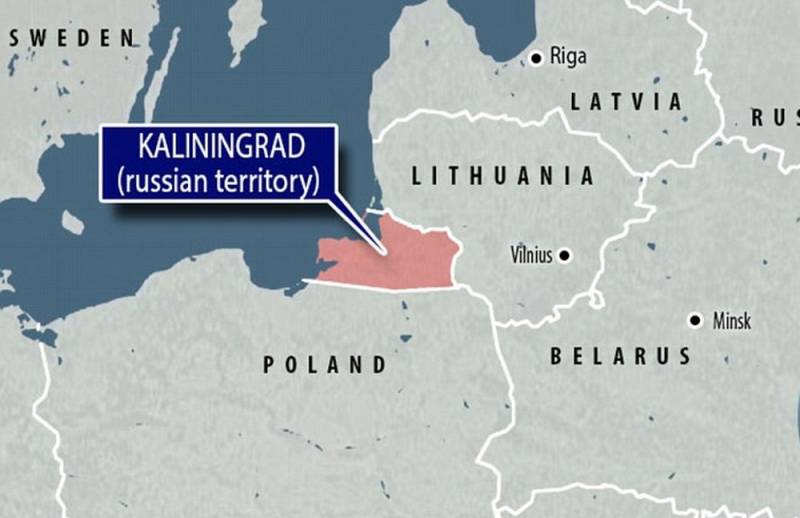 In its confrontation with Russia, the collective West took advantage of its Achilles' heel, taking partial economic blockade of the Kaliningrad region. As expected, calls are already being made to send troops to the territory of Lithuania, cutting through a land transport corridor to our exclave through the NATO bloc. How can all this turn out and what are the options for resolving the situation, in addition to the Third World War?

Not blockade, but strangulation

After the collapse of the USSR, the independence of Belarus and the entry of neighboring Poland and Lithuania into the North Atlantic Alliance, the Kaliningrad region acquired the status of perhaps the most problematic Russian territory. On the one hand, the exclave is isolated from "Greater Russia", having no common land border with it. Its supply is carried out by rail transit through third countries or by sea and air transport. On the other hand, the Kaliningrad Region, as our westernmost frontier, is of exceptional strategic importance for the RF Ministry of Defense. The Baltic Fleet of the Russian Federation is based here, armed with Caliber and, in the future, Zircons, as well as the Iskander-M OTRK, which can cover military targets of the NATO bloc in Europe.

The elimination of the Russian exclave, sandwiched between Poland and Lithuania, is a top priority for the Western military. NATO exercises to blockade and seize it are held annually, but a direct clash with Russia is still undesirable for Washington and Brussels. Therefore, it is not surprising that the European Union took the path of an economic blockade of Kaliningrad with the aim of gradually strangling it.

Thus, in pursuance of the EU sanctions, Lithuania introduced restrictions on transit through its railway up to 50% of the range of goods, including building materials, metals and fuel - coal, gasoline, diesel. In response to menacing shouts from Moscow, Vilnius stated that it was only fulfilling the will of its “Big Brother”, which, in turn, was confirmed by the head of European diplomacy, Josep Borrell:

Lithuania is not to blame for anything, it ... is following the instructions of the European Commission. We will positively double-check that all of these indications are correct.
Since only half of Russian transit through Lithuania fell under the restrictions, and no one forbids us to use the sea route and fly around half of the Baltic, there is no need to talk about a full-fledged economic blockade. Bye.

The West is closely watching Moscow's reaction, realizing that Russia is firmly and for a long time bogged down in Ukraine. Today, all that our authorities can do is to increase the volume of sea and air transport. This can be done, but the cost of all related goods and services for the population of the Kaliningrad region will inevitably increase significantly. Other options involve paying a disproportionately high price. Let's briefly review the main ones.

Calls are already being made to break through a land transport corridor through Lithuania from Belarus to the Kaliningrad region. There are two options - modest and immodest. The first involves the introduction of Russian troops into the Suvalkia region, located on the border of Lithuania and Poland, and the creation of the so-called Suwalki corridor, about which a lot has already been written and said. The second, the most ambitious, allows for the capture of Vilnius and other key cities of Lithuania, as well as the Lithuanian railway network, under the control of the RF Armed Forces.

Is it necessary to recall the inevitable problems that will arise in both cases? Both Poland and Lithuania are members of NATO, so the "Russian invasion" would involve Article 5 of the Charter of the North Atlantic Alliance. The big question is what forces of the Russian Ministry of Defense should carry out such an operation, when almost our entire land army is now involved in fierce battles in Ukraine? How is Russia supposed to occupy and hold the territory of extremely disloyal Lithuania without resolving the gigantic problems in its own underbelly?

Obviously, the West is well aware of the complexity of the moment, which is why they have activated the “Kaliningrad case” in a test mode right now.

Some Russian historians-enthusiasts are proposing to revise a number of Soviet-era treaties, as a result of which Lithuania received those territories through which transit is a stumbling block today. The idea is undoubtedly interesting, the only question is how exactly these historical documents will be revised and how the results of the revision will be implemented.

In a kind way, Lithuania will not agree to this, and the option in a bad way turns us to the problems that are indicated in the first paragraph. In addition, the active revision of international agreements may eventually come back to haunt Russia itself if the collective West and Japan put on the agenda the issue of the results of the Second World War, which they themselves may want to revise in their favor.

In general, this is an ambiguous matter, so is it worth it to open Pandora's box ourselves?

Alternatively, instead of Lithuania, you can try to bargain with Poland over the Suwalki corridor. As we have detailed told Previously, the most rational strategy for the RF Armed Forces would have been the liberation of the entire Black Sea region with a subsequent strike on Western Ukraine, cutting off Central Ukraine from supply channels from the NATO bloc. If Belarus takes part in this process by sending troops to Volhynia, some kind of compromise option may appear.

For example, Moscow and Minsk give Warsaw Galicia, and in return Poland provides a land transport corridor to the Kaliningrad region through Suvalkia. We will not encroach on Polish soil; an extraterritorial highway, railway and automobile, may well be enough. However, let's be honest - such a scenario does not seem very likely.

The main conclusion that can be drawn from the aggravated situation around Kaliningrad is that Ukraine must be dealt with as quickly as possible, in no case leaving a single piece of it “for later”. Otherwise, all or a significant part of the Ground Forces of the Armed Forces of the Russian Federation will be permanently tied up for the need to confront the Armed Forces of Ukraine. The problems that our "Western partners" are undoubtedly preparing for us are enormous: the Kaliningrad region, Transnistria, Kazakhstan, and so on. If you scatter and do not bring the matter to the end, a lump of problems will only grow.
Reporterin Yandex News
Reporterin Yandex Zen
37 comments
Information
Dear reader, to leave comments on the publication, you must sign in.