How Russian armored vehicles perform in the Ukrainian conflict 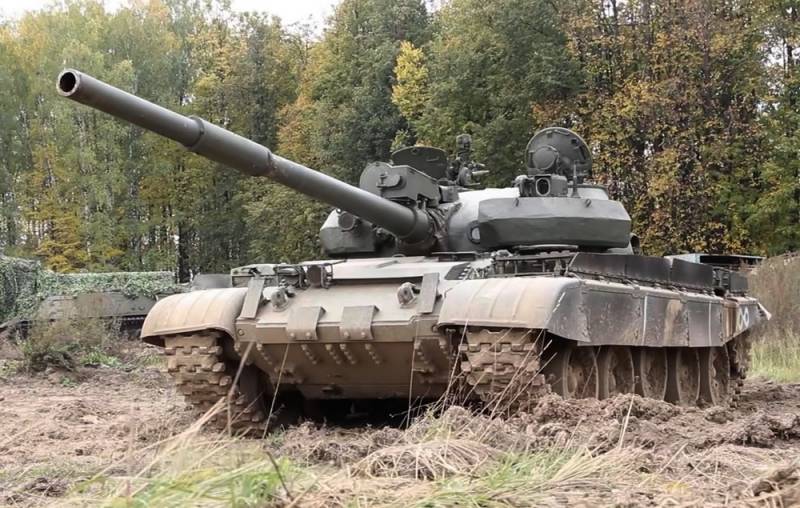 In the last couple of weeks, enthusiasts around the world have been actively discussing another news from the fronts of the Northern Military District: the appearance, first in the rear, and now on the front line of Russian T-62 tanks, vehicles, of course, outdated morally and physically. As usual, there is not so much objective information from the field on this matter, just a few photographs of not the best quality.


Ukrainian propaganda and Russian alarmists at their sight raised a screech about the alleged destruction of all more modern armored vehicles. More or less adequate sources tried to recall the characteristics of the "sixty-two" and suggest why they ended up in the combat zone and how they would be used. In particular, I myself assumed that the T-62 was raised from the reserve for the people's militia of the DPR and LPR to replace the "killed" T-64s, the repair of which is now extremely difficult - but it seems that at least part of the "sixty-two" will still be used and Russian troops, possibly the Russian Guard or "Wagnerites".

We can confidently say that the NWO once again sent to the trash the forecasts of couch futurological congresses about the "war of the future." More precisely, the reality turned out to be much closer to the canon of the “last war”, although updated, than to bright cartoons about “tactical special forces” and thousands of flocks of drones.

You should not think that it is only with us, in "backward Russia", that this is the case. In fact, all the armies of the world still rely on the concepts and materiel left over from the Cold War, modernizing them as far as possible. In the United States and China, the process of material renewal of arsenals is going faster, in other countries it is slower, certain changes are being made to doctrines, but there are no truly revolutionary experiments, as in the 1950s-1960s, anywhere.

The latest high-tech means of communication and surveillance, compact precision-guided munitions certainly make their contribution, but in general the ratio between the most important weapons systems has remained the same: the god of war is still artillery, and the king of battles is still a tank.

It is the "elephant" on the tracks that remains the most heavily armed, protected and tenacious unit in contact combat. To the dismay and horror of the Ukrainian “zahists”, “the holy Javelin turned out to be not a miracle weapon, but exactly what it is, the last means of anti-tank self-defense. There is no question of even successfully repelling tanks with only Javelins and NLAW, not to mention the transition to a counteroffensive. We won’t get exact figures for a long time, but you can be sure that the loss of armored vehicles from the fire of infantry anti-tank weapons and mine explosions does not exceed 10% (however, approximately the same can be said about human losses).

Everything else, as one would expect, on the account of enemy armored vehicles and especially artillery. In view of the active use by the Ukrainians of numerous artillery, the share of tanks in the total number of lost armored units will be relatively large. In the same Afghanistan and Chechnya, where the enemy had almost no heavy guns, tanks with their powerful protection suffered much less than lightly armored infantry fighting vehicles and armored personnel carriers, which the Mujahideen burned an order of magnitude more.

Some technical and practical solutions for the protection of armored vehicles did not pass the "field exam". First of all, this concerns the dynamic protection in soft containers used on the latest modifications of the T-72B3 and T-80BVM tanks: as they warned in advance, the “bags” on the sides were easily torn, clinging to obstacles, and the vehicles were quickly left without additional protection. As far as one can tell, these "bags" are now out of use. It seems that the turret visors installed on parts of the tanks by the crews did not perform very well either.

With several crossings with a fight, the ability of our light armored vehicles to move by swimming was finally used - there are recorded facts of its use, however, there is no reliable information about how successful it was. The "cardboard" protection once again confirmed its reputation, but what, as it turned out, was missing was solid armored screens that would save some of the vehicles from fragments of enemy shells. The anti-cumulative grilles, actively used by the Ukrainian side, are much less important: they do not protect against artillery ammunition (like those visors mentioned above).

But the own armament of tanks, infantry fighting vehicles and armored personnel carriers showed its best side: the guns showed impressive reliability (there are shots of the BTR-82A, the cannon of which was completely peeled off from overheating during intensive shooting, but continued to work), and ammunition - the ability to reliably hit any targets.

Better no pants than no tanks

As I said in one of the previous materials, the wide scope of the operation required an extensive and intensive use of all types of weapons and military equipment. The enemy is numerous and approximately equal in quality to the Russian and allied troops. In this regard, the losses of military equipment during hostilities are relatively large, and the consumption of resources (in essence, the same “dying” of machines, only non-violent) is even greater. At the same time, the readiness of the Western “friends” of fascist Ukraine to directly get involved in the conflict is still unclear: it seems that it is declining, but what the hell is not joking.

As a result, the Russian army is in a position where it needs both efforts in the main theater of operations and readiness to repel the aggression of an enemy better equipped than the Armed Forces of Ukraine.

That is why it is necessary to save some of the modern technology (not all!) For "dear guests", and in Ukraine to use, among other things, junk from the reserve. This is the case not only with armored vehicles, but also with artillery systems and combat aircraft (the Air Force also strikes with the help of the Su-24, also of a fairly respectable age).

Of course, this is not the most pleasant situation. It turns out that the Soviet generals were not so wrong, demanding from the industry boundless herds of military vehicles and entire Elbrus of spare parts for them. And those who “cut” all this heritage and the Armed Forces as a whole not so long ago, in turn, were very wrong, and this is putting it mildly.

In fairness, the Russian command did not risk letting people on a completely horse-drawn iron into action until the Ukrainian stocks of military equipment and anti-tank weapons were seriously thinned out. According to the latest reports, Ukrainian artillery is no longer feeling the best, and imported anti-tank missiles are running out and almost no longer come across as trophies - which means that the crews of the "sixty-two" will be able to operate with acceptable risk.

But the command of the Armed Forces of Ukraine now absolutely does not care about the lives of their tankers. However, it looks like it wasn't. From the very beginning of the operation, as soon as the first captured T-64s appeared, it turned out that many of them went into battle with empty - that is, useless - dynamic protection boxes. With a huge PR of the "Ukrainian" BTR-3/4 armored personnel carriers (actually built on the basis of the BTR-70 hulls from the Soviet legacy) and various armored cars, several hundred quite combat-ready BMP-2s disappeared somewhere. Ukrainian propaganda is trying to avoid this topic, since it is not clear whether the cars have been sold somewhere for a long time (or quite recently), or whether they have rotted and remained “dead souls” only on paper. As a result, the main equipment of the Ukrainian motorized infantry are the old "seventies" and BMP-1, inherited from the hated communists.

Like armored vehicles on the front line, the factory facilities and repair funds of the Ukrainian tank industry continue to be methodically destroyed. There is nothing to restore the resource of even standard equipment, not to mention foreign gifts, the flow of which, moreover, begins to dry up. Everything goes to the fact that in three months the last defenders of the Kyiv regime, if any, will be driven into battle in personal cars.
Reporterin Yandex News
Reporterin Yandex Zen
18 comments
Information
Dear reader, to leave comments on the publication, you must sign in.