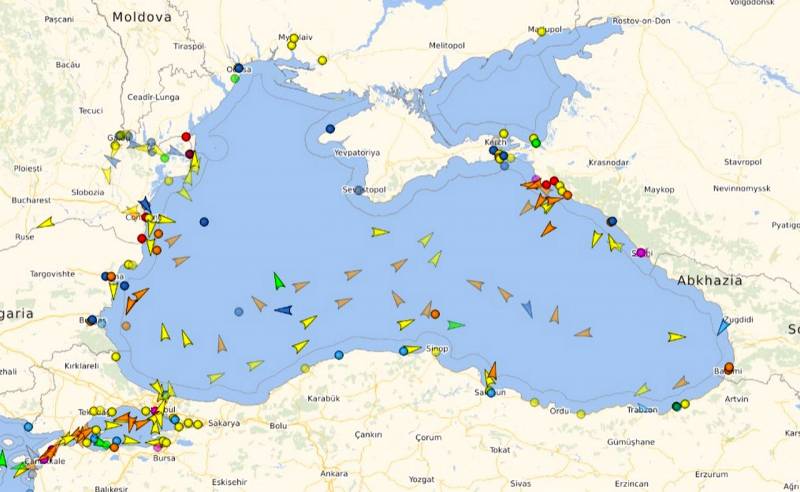 Every day the former Square is increasingly turning into a terrorist state. The Armed Forces of Ukraine are hitting the civilian population of Donetsk with Tochka-U missiles, covering themselves from retaliatory strikes by Russian troops by their own fellow citizens, setting up makeshift barracks and command centers in the buildings of schools, kindergartens and even operating hospitals. Apparently, another innocent victim of the Ukrainian anti-aircraft gunners was a fighter and a rescue helicopter of the Romanian Air Force, which they, out of fright, mistook either for Russian missiles or for aviation. Now the rabid Nazi regime in the former Nezalezhnaya has already created a threat to international shipping.


Having lost the Sea of ​​Azov, Kyiv clung to the Black Sea to the death, realizing that without access to the sea and commercial ports, its days were numbered for purely economic reasons. Fearing an amphibious assault by the Russian Navy, the Armed Forces of Ukraine installed about 420 underwater mines in the waters of Odessa, Ochakovo, Chernomorskaya and Yuzhny, and city beaches were also mined. Under water in the Black Sea, mines of two types were installed - NM and NRM, and in the waters of the Sea of ​​\uXNUMXb\uXNUMXbAzov - also anti-amphibious bottom mines PDM with a contact fuse. But in Mariupol, they, apparently, could not play any role at all, the city is being cleared from land.

Mina NM was developed at the end of the Great Patriotic War, NRM is a slightly more modern development. They have a relatively small charge, corresponding to 3 kilograms of TNT. Their important feature is that they are not equipped with a battery and therefore can operate for a very long time. Undermining is carried out when it hits the side. Another important feature of NM and NRM is that these are not sea, but river mines, designed to be installed in rivers, lakes and other relatively small bodies of water. Finally, it should be mentioned that due to their great age, these rarities are in an unsatisfactory technical condition, in other words, they are very rusty.

The logical result of the massive use of such explosive devices by the Armed Forces of Ukraine was that after the first serious storm, some of them were torn off and carried away to the open sea. The Center for Public Relations (CSP) of the FSB of Russia commented on this information as follows:

After the start of a special military operation by the Russian Federation, the Ukrainian Navy installed minefields on the approaches to the ports of Odessa, Ochakov, Chernomorsk and Yuzhny (about 420 mines of obsolete types of anchor mines) and anchor river mines produced in the first half of the XNUMXth century. Because of the storm, breaks in the cables (minreps) connecting the mines with bottom anchors began to occur. Under the influence of wind and current, mines move freely (drift) in the western part of the Black Sea.
Considering the direction of currents in this part of the Black Sea, Ukrainian mines may well reach, for example, the Romanian Constanta or the Turkish Bosphorus. It is worth recalling that about 56 ships pass through the Turkish straits a year, of which 10 are tankers carrying 145 million tons of crude oil. With a certain "luck" Ukrainian mines can drift unnoticed even to the Mediterranean Sea, where shipping is even higher, and various main pipelines run along the bottom. It is not difficult to guess what the explosion of an oil tanker or an LNG tanker on a wandering mine of the Armed Forces of Ukraine could end up with. There will be a real ecological catastrophe with the spill of hydrocarbons into the sea. If any cruise yacht stumbles upon a Ukrainian mine, then this contact will not end in anything good for her crew.

All this is absolutely real. Only a specialized warship with the assistance of Il-38N aircraft and Ka-27M helicopters of naval aviation is able to notice and safely neutralize such a wandering mine in a timely manner. The task for minesweepers will be complicated by the fact that NM and NRM should not only be neutralized in the area of ​​their setting, but first also found on the high seas, which is akin to looking for a needle in a haystack.

It should be noted that in Ukraine they have already begun to “justify themselves” from their mines. So, in the publication "Odessa Courier" the following "refutation" was published:

The Ukrainian Navy notes that they did not engage in minelaying at sea - which would be impossible in the conditions of the complete dominance of the Russian fleet. But on the morning of March 17, one sea mine, torn from anchor, was thrown onto one of the beaches in Odessa - where it exploded.

After that, on March 18, the director of the Russian port of Sochi, Rumyantsev, sent out a letter with information about the danger to navigation, which is posed in the waters near Odessa at once by 420 anchor mines of the model of almost the Second World War. Most likely, the ordinary head of the port, not even engaged in cargo transshipment, knows about the exact number and type of mines from the Russian command, which itself installed these mines in order to disrupt navigation in the area of ​​​​the ports of Odessa, Yuzhny, Chernomorsk and Nikolaev.
They lie, of course, by pointing the arrows at Russia. They are simply afraid that for the negligence of the Armed Forces of Ukraine Kyiv will not be patted on the head by its own patrons in the West. Such minelaying could easily be done from small boats of the Ukrainian Navy and even from simple civilian watercraft.

By the way, I would like to remind you that we have already warned previously. In an article dated December 16, 2021, titled “How the “mosquito fleet” of Ukraine can lock up the Black Sea Fleet of the Russian Federation in ports,” we tried to simulate a situation in which Russia enters into an armed conflict with the NATO bloc, and Nezalezhnaya takes the side of the alliance by mining the water area Black Sea near Sevastopol with the help of their speedboats. Naturally, from our numerous "sofa experts" in the comments there were only chuckles and chuckles, but you see how it turned out in real life.

Yes, Russia, with its harsh ultimatum on the inadmissibility of interference, pulled NATO out of the conflict and itself launched a preemptive strike on Ukraine, neutralizing the Ukrainian Navy. But even so, having actually been left without a fleet, Kyiv was able to create a lot of serious problems for Russia and everyone around with its mine productions, some of which went on a free voyage. Now the Black Sea Fleet of the Russian Federation will have to rake behind Nezalezhnaya, and for quite a long time.
Ctrl Enter
Noticed oshЫbku Highlight text and press. Ctrl + Enter
Reporterin Yandex News
Reporterin Yandex Zen
5 comments
Information
Dear reader, to leave comments on the publication, you must sign in.