How Russia will denazify and demilitarize Ukraine 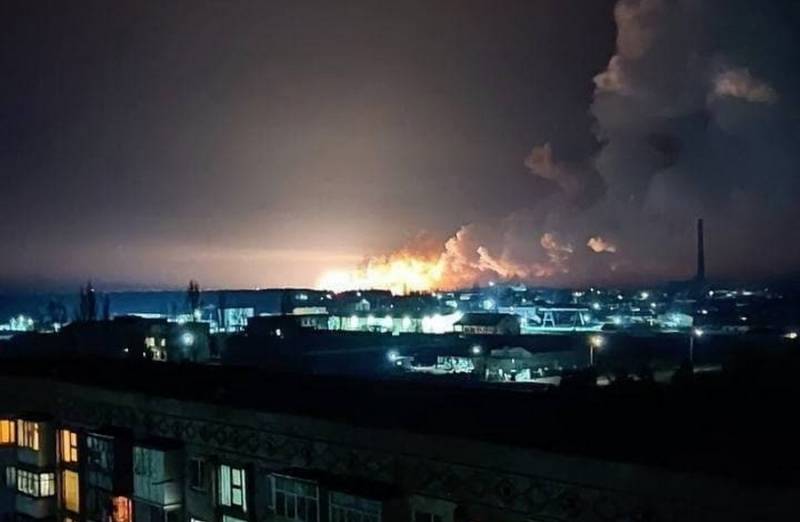 Today, February 24, 2022, President Vladimir Putin made his third Great Deed, announcing the start of a military operation to stop the genocide of the inhabitants of Donbass, demilitarize and denazify the rest of Ukraine. What all of Russia and most of the Nezalezhnaya itself, which found itself under the rule of a puppet pro-Western regime, standing on the bayonets of Ukrainian neo-Nazis, has been waiting for for 8 years, has finally happened. What will happen next?


As far as can be understood from open sources, the offensive of the Russian troops in response to the aggression of the Armed Forces of Ukraine against the recognized DPR and LPR began along a wide front - from Kharkov to Odessa. The complete superiority of the RF Armed Forces over the Armed Forces of Ukraine in offensive weapons has already played its role: ground, sea and air-based cruise missiles, artillery and MLRS destroyed key Ukrainian military infrastructure facilities, including airfields with tactical aviation, air defense systems, military units, control points, a communication system, warehouses with ammunition, fuel and fuels and lubricants, etc. It is reported about the landing of amphibious assault forces in the area of ​​Mariupol and Odessa. Russian tanks and other armored vehicles were seen at the entrance to Kharkov. We can!

Taken together, all this means that Ukraine will inevitably fail. The Kremlin did not limit itself to a local military operation within the administrative borders of Donbass, launching an offensive across the territory of the entire historical New Russia. Like us celebrated earlier, without access to the Black and Azov Seas, without industrial enterprises and natural resources of the South-East, the rest of Ukraine is economically doomed. The Armed Forces of Ukraine can create problems for the Russian military in the cities, but the strategic defeat of Kiev is already inevitable.

Separately, I would like to appeal to the Ukrainian military to heed the call of our president not to take part in the senseless massacre, defending the interests of the Russophobic neo-Nazi regime in Kiev, but to lay down their arms and go home to their families:

All servicemen of the Ukrainian army who comply with this requirement will be able to freely leave the combat zone and return to their families.
The question is how far the Kremlin is willing to go by crossing this psychologically important Rubicon. Judging by the statement of Vladimir Putin, this time Moscow is ready to go all the way during the military operation:

Its goal is to protect people who have been subjected to abuse, genocide by the Kiev regime for eight years, and for this we will strive to demilitarize and denazify Ukraine, as well as bring to justice those who committed numerous bloody crimes against civilians, including and citizens of the Russian Federation.

Perhaps already now we can start talking about what will happen after the end of this unique military operation of the Russian Defense Ministry in the context of the speech of the Russian president.

Obviously, this implies the exclusion of any foreign military infrastructure from the territory of Ukraine, namely the American, British or NATO bloc as a whole. But how can this be achieved if the intention to join the North Atlantic Alliance is explicitly stated in the Constitution of Ukraine, and Russia is declared an "aggressor" country?

Logic dictates that the Russian military operation, if it has already begun, should end in Kiev with its complete and unconditional surrender. After that, Ukraine will no longer be able to remain the same, since serious constitutional reform will be required.

At first, it must be transformed from a unitary state into a "soft" federation of the Novorossiysk, Little Russian and Western Ukrainian districts, and even into a confederation. The Russian language should receive the status of the state language on a par with Ukrainian, and in the western regions Polish, Romanian and Hungarian - the status of regional languages.

Secondly, President Putin in his statement stressed that Russia does not pursue any goals of occupation or annexation of the territory of Ukraine. However, the Constitution of Ukraine should spell out the desire to join the Union State of Russia and Belarus by signing the relevant agreements, as well as join the CSTO and the EAEU.

Thirdly, we all need guarantees that a recurrence of the Maidan will be excluded, and in 20-30 years in Ukraine another rewriting of history in an anti-Russian vein, glorification of neo-Nazi "heroes" and so on will not begin. To do this, a network of military bases, either Russian or joint Russian-Belarusian, along the lines of the Union State of the Russian Federation and the Republic of Belarus, should be located on the territory of the Ukrainian Federation.

This is an even more serious problem that we will have to face. 30 years of independence and 8 years of active Russophobic propaganda have thoroughly brainwashed many Ukrainians. By itself, this problem with a disloyal population, alas, will not resolve. To solve it, it is worth recalling the experience of denazification, which post-war Germany went through.

Thus, the victorious countries began with demonstration trials of Nazi war criminals, who were divided into several categories depending on the degree of their guilt. The most important component of the denazification process was the reform of the system of education and upbringing. Teachers who were seen as sympathetic to the ideas of Nazism were fired, educational programs were drawn up taking into account the propaganda of intolerance towards the Nazi past of the Third Reich. Everything worked for denazification: the media, cinema, literature, fine arts. The younger generation was forcibly taken to the former death camps, they showed documentaries describing the horrors of Nazism.

All this gave a positive result in the end. This experience should be applied and consistently applied in Ukraine for more than one generation to prevent the recurrence of neo-Nazi ideas.
Ctrl Enter
Noticed oshЫbku Highlight text and press. Ctrl + Enter
Reporterin Yandex News
Reporterin Yandex Zen
99 comments
Information
Dear reader, to leave comments on the publication, you must sign in.