Why not Russia should fight for Ukraine, but the Liberation Army of Ukraine 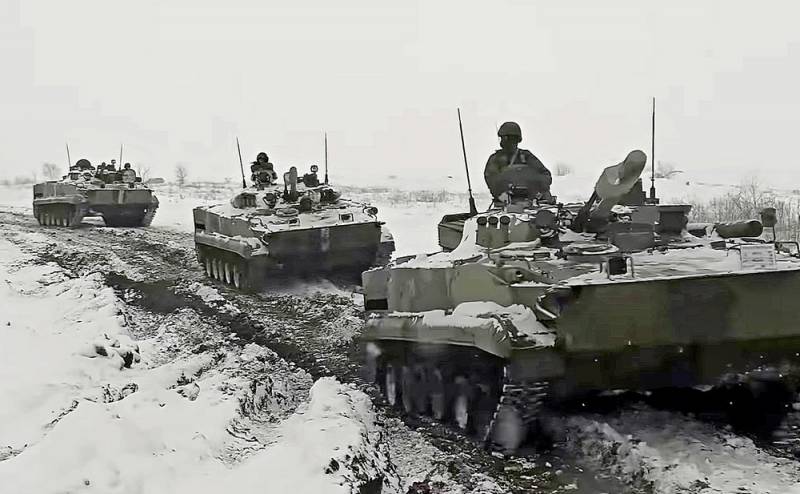 The sensational decision of President Putin to recognize the independence of the DPR and LPR nullified the "obscene" in essence "Surkov" scenario of the return of the rebellious Donbass to Ukraine. It also opened before Russia many scenarios for further actions to resolve the sore "Ukrainian problem." But which path should we take?


On the eve of the "Reporter" came out publication, telling about how the recognition of the statehood of the People's Republics of Donbass can allow the rest of the territory of Independence to be liberated from the power of the pro-Western Russophobic puppet regime, mainly by the forces of the Ukrainians themselves. Surprisingly, some of our particularly militant readers were not satisfied with the “hybrid” scenario: they should be given the direct entry of Russian troops, full-scale military operations against the Armed Forces of Ukraine and the subsequent occupation of the territory of a foreign sovereign country.

Well, it’s possible that it’s really impossible to do without the direct participation of the RF Armed Forces, but you can at least try, right? Let's try to speculate about why Russia's "hybrid" actions are more beneficial than a full-scale military confrontation.

Let's start with the fact that international law, to put it mildly, does not approve of wars and other aggressive actions against sovereign countries. Moscow has no sanction from the UN Security Council for the invasion of Russian troops into the territory of Ukraine. The only legal loophole, perhaps, is the "humanitarian intervention", which we told previously. Under certain circumstances, Russia could really use it. But what about the introduction of Russian troops into the territory of the DPR and LPR, the inquisitive reader will ask.

"It's different." In the Donbass, first, nationwide referendums on independence were held and then they turned to the Kremlin with a request for recognition and military assistance. In Kiev and in the West they may not agree with this, but here Russia is acting in its own right. The introduction of Russian troops, for example, into the Kharkov or Odessa regions without the consent of the legitimate authorities is, from the point of view of international law, direct military aggression. However, we have one interesting loophole.

So, immediately after the signing of the Decree on the recognition of the DPR and LPR, a natural question arose, within what boundaries was this done, legal (administrative) or actual (along the line of demarcation). There was a real confusion. Andrey Klimov, Deputy Head of the Federation Council Committee on International Affairs, stated the following:

We are talking, of course, about those territories that are within the boundaries established today. Everything else is outside the scope of those specific legal actions that we have just observed and that will take place tomorrow.

Andrey Rudenko, Deputy Minister of Foreign Affairs of the Russian Federation, spoke in the same spirit. President Putin had to intervene in the matter and carry out explanatory work personally:

We have recognized them, which means we have recognized all their fundamental documents, including the constitution. It spelled out the borders within the Donetsk and Luhansk regions at the time when they were part of Ukraine.

That is, all territories of the DPR and LPR are recognized as independent along their administrative borders. Or not? From the literal interpretation of the presidential decree and its public statement, it can be concluded that those territories that are designated as “their own” in accordance with the Constitutions of the DPR and LPR are considered “Donbass”. And here the most interesting begins.

In 2015, the DPR parliament adopted a memorandum, according to which the Donetsk People's Republic proclaimed itself the legal successor not even of Catherine's Novorossiya, but of the Soviet DKR:

Recall that the Donetsk-Krivoy Rog Soviet Republic (DKSR) was proclaimed in 1918 as an autonomy within the RSFSR, and then became part of the Ukrainian SR. It did not last long, which was facilitated by the "NATO" German-Austrian occupation of Ukraine. After the restoration of Soviet power in 1919, the DKSR was abolished and became part of the Ukrainian SSR. We are also interested in what territories it occupied: the current Donetsk, Luhansk, Zaporozhye, Kherson, Dnepropetrovsk, and also partially Kharkov, Kherson, Nikolaev, Sumy regions of modern Ukraine and even a piece of Russian Rostov. True, without the Odessa region.

And what can confirm the claims of Donetsk and Luhansk to such vast territories if they are supported by Moscow?

It can give a lot.

At first, the recognition by the Kremlin of the independence of the DPR and LPR and the opportunity to extend their sovereignty within the framework of the DKR to virtually the entire Left Bank and South of Ukraine gives reason for their residents to count on the fact that they will not get stuck this time halfway, “like in the Donbass.” Although not all, but a significant part of the local population is still pro-Russian and opposes further “European integration” through de-industrialization and the sale of land to foreigners, joining the NATO bloc and becoming a target for the Russian Strategic Missile Forces. The factor of direct support or neutrality of the main part of the local population will be of paramount importance if it is necessary to take vast territories under control.

Secondly, Russian troops will have the right to enter the territory of the state recognized by the Kremlin, the successor of the DKR, to provide it with military assistance. And this will no longer be direct military aggression.

Thirdly, a full-scale intervention of the RF Armed Forces may not be needed. The fact is that after the recognition of the DPR and LPR, all restrictions on military assistance to the Donbass were lifted. Now the pro-Russian enclave will be able to receive the most modern weapons: aviation, OTRK, air defense systems, warships, etc.

A lot has been said about how the inhabitants of the South-East suffered from the neo-Nazi regime in Kiev. In Donetsk and Luhansk, recruiting centers for volunteers from both Ukraine and Russia can be opened to create the People's Ukrainian Liberation Army. Armed with modern weapons, guided by Russian military advisers, it is she who, in theory, should expel pro-Western puppets from her territory. The Armed Forces of the Russian Federation will then act as a rear and support in case of unforeseen circumstances.

What could be the further actions of the Liberation Army of Ukraine?

At the first stage, it will be necessary to occupy the territory of the DKR along the Left Bank of the Dnieper, as well as to help comrades from the Odessa and Nikolaev regions. For the most part, this may be sufficient. After this, any anti-Russian regime in Kiev is simply doomed for purely economic reasons.

Imagine that tax revenues and energy resources will stop coming from the territory of the South-East, access to commercial ports will be blocked. Against the backdrop of the need to regularly pay debts to the IMF, fulfill social obligations to the population, this means an inevitable financialeconomic collapse and collapse of the puppet regime. After that, Kiev can be taken "lukewarm" and dictated to him any conditions for peace negotiations and the subsequent internal reorganization of Ukraine.

If this does not work, then the Liberation Army will have to complete its task, preferably without the direct participation of the RF Armed Forces. As for the risks of bringing NATO contingents into the territory of Ukraine and dividing it, with the help of modern air defense and aviation systems, the liberators will be able to independently establish a no-fly zone over the Right Bank and launch preventive missile strikes against the advancing foreign troops of the Iskander-M OTRK, because all restrictions on the supply such weapons have now been withdrawn.

Probably, it would be right if the Ukrainians themselves begin to liberate Ukraine with the active assistance of Russian troops.
Reporterin Yandex News
Reporterin Yandex Zen
98 comments
Information
Dear reader, to leave comments on the publication, you must sign in.