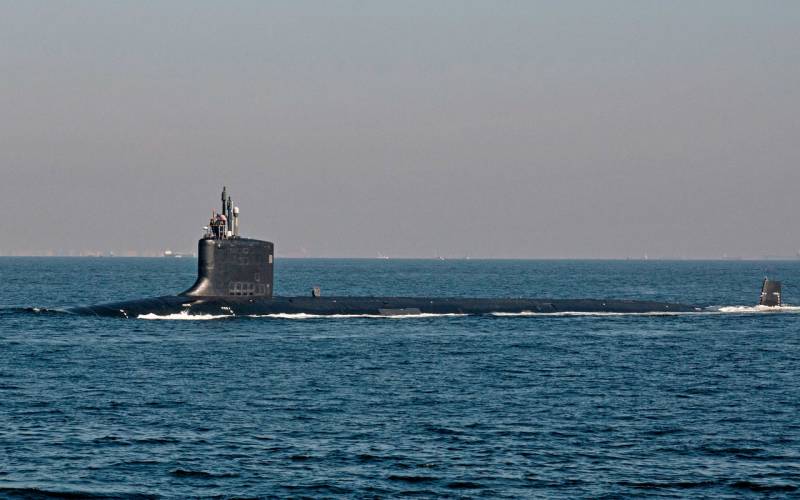 The day before, a very important and at the same time disturbing event took place. An American nuclear submarine, which was observing the exercises of the KTOF of the Russian Federation, violated the Russian maritime border. Being discovered, she did not respond to the order to surface and retired at full speed after the use of certain "special means" against her. The Ministry of Defense of the Russian Federation called this incident a threat to our national security. It really is, and here's why.

As you know, the Russian Navy is currently conducting the largest military exercises in modern history on all seas and oceans in its area of ​​responsibility. Including the Pacific Ocean. During maneuvers near the Kuril Islands, a US Navy multi-purpose submarine of the Virginia class was discovered, carrying out surveillance while in Russian territorial waters. Our Pacific Oceans gave the Americans a message of the following nature:

You are in the territorial waters of Russia. Ascend immediately!
Instead of surfacing, the submarine ignored the legal order, and then something like a “sea battle” happened. Some special means were used against the Virginia, and she tried to deceive the Russian frigate Marshal Shaposhnikov by setting up a self-propelled simulator to split the target on means of radar and acoustic control, and disappeared at the maximum available speed. After this incident, a corresponding note was handed over to the military attache through the Ministry of Defense of the Russian Federation.

So why is this event so important?

The theater of possible military operations should be taken into account. Our potential adversaries here are Japan and the United States. At best, the Kuril Islands, disputed by Tokyo, will act as a “bone of contention”, at worst, not only the territorial integrity, but also the very national security of our country may be in question. To understand the depth of the problem, it is necessary to give some figures.

The Japan Maritime Self-Defense Force has two light aircraft carriers, two helicopter carriers, 8 URO destroyers, 29 destroyers, 6 frigates and 21 diesel-electric submarines, as well as modern fighter and anti-submarine aircraft. In addition, the US Seventh Fleet is based in the Land of the Rising Sun. It includes a Nimitz-class nuclear aircraft carrier, 2 Ticonderoga-class URO cruisers, 7 Arleigh Burke-class URO destroyers, a sister ship of the Mount Whitney familiar to us, 4 landing ships, 2 minesweepers and 3 multi-purpose nuclear submarines. boats of the Los Angeles class. Let's remember this moment!

The forces opposing them on our side are very modest. With the surface fleet, everything is very bad. The missile cruiser "Varyag", the flagship of the KTOF, went to the Mediterranean Sea along with the project 1155 BOD "Admiral Tributs". BOD "Admiral Vinogradov" went to repair and deep modernization, which will take more than one year. Of the large surface ships in the Pacific, the Russian Navy has only the old Project 956 destroyer Bystry, the former BOD of Project 1155 Marshal Shaposhnikov, turned into a frigate, and the BOD of the same project Admiral Panteleev, which is still waiting for its modernization.

There are also several modern corvettes of projects 20380 and 20385. Unfortunately, the almost finished Provorny corvette, intended for the Pacific Fleet, recently burned down at Severnaya Shipyard. That, in fact, is all that should be taken into account from the surface forces capable of at least somehow covering our submarine from the Japanese and Americans.

When talking about the weakness of the KTOF surface component, it is usually customary to focus on its numerous submarines. And indeed, there is something to see. The Pacific Fleet is of strategic importance to Russia's security, thanks to the presence of SSBNs carrying ICBMs with nuclear warheads. At the moment, there are 4 SSBNs: K-44 "Ryazan", K-550 "Alexander Nevsky", K-551 "Vladimir Monomakh" and K-552 "Prince Oleg". Two more "Boreas" are being built for the KTOF - "Generalissimo Suvorov" and "Emperor Alexander III". In addition to SSBNs, there are also multi-purpose SSGNs and diesel-electric submarines of various projects in the Pacific Ocean. It is believed that with all this we will, if anything, “glaze” Tokyo, and at the same time Washington. But there are some problems.

Our potential adversaries are well aware of the strengths and weaknesses of the KTOF. To stop the strike potential of Russian submarines, the Japanese and Americans created the most powerful anti-submarine forces in the region: numerous anti-submarine aircraft, multi-purpose destroyers and frigates, aircraft carriers and helicopter carriers with their anti-submarine helicopters, as well as submarines-hunters for other submarines. As a matter of fact, here we turn to the title topic of the article.

If you remember, we indicated that the Seventh Fleet of the US Navy has 3 nuclear submarines. These are multi-purpose nuclear submarines of the Los Angeles class. They can conduct reconnaissance, fight surface ships and other submarines, carry out special operations, etc. But not far from the Kuril Islands was a completely different American submarine.

The main purpose of the Virginia-class nuclear submarine is precisely the hunt for enemy (our) submarines. For this reason, her main armament is torpedoes, of which she carries up to 26 pieces with 4 torpedo tubes. Also, in the latest modifications (blocks), submarines of this type are armed with 12 launch cells for Tomahawk cruise missiles. And what does it mean to send a hunter submarine, which is not included in the list of the US Seventh Fleet, to the area of ​​Russian naval exercises?

Exactly what the Pentagon demonstrates is the ability to quickly neutralize the submarine component of the Pacific Fleet of the Russian Federation with its strategic SSBNs, with which it is almost customary for us to threaten to “glaze” Tokyo. Against the backdrop of the conflict with the NATO bloc and Washington's demonstrative support for Japan's claims to the Kuril Islands, this looks extremely ominous. Americans again denote in front of the Kremlin is a hypothetical "Eastern Front", in fact forcing the Russian Navy to return a few combat-ready ships from the Mediterranean back to the Pacific Ocean.
Ctrl Enter
Noticed oshЫbku Highlight text and press. Ctrl + Enter
Reporterin Yandex News
Reporterin Yandex Zen
46 comments
Information
Dear reader, to leave comments on the publication, you must sign in.