Will Ukraine be engulfed by large-scale “gas protests” 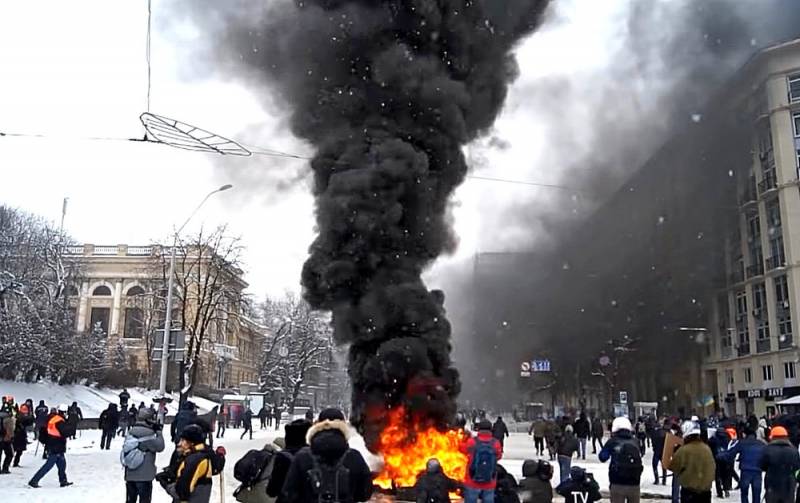 In the first days of the New Year 2022, a real apex coup took place in Kazakhstan, the background for which was mass street protests that turned into riots and armed clashes. At first, these events received the unofficial name "gas maidan", and after that we counted it is possible to rename them into "rebellion of superfluous people". Be that as it may, a change of power in Kazakhstan has taken place: President Tokayev has turned from a “puppet” into a sovereign master, and the clan of ex-president Nazarbayev has fallen into disgrace. The question arises, can something similar happen in Ukraine, where there are enough gas problems and their own “extra people”?


It is worth reflecting on this difficult and controversial topic, since the change of the pro-Western regime in Kiev to some other without a direct military invasion of Russia can be very beneficial for us. The key question is who will replace Pan Zelensky: former President Poroshenko, who unexpectedly returned to Ukraine from abroad, with his radicals, or some conditionally pro-Russian or at least conditionally neutral forces? Let's leave this aside for now and see if the Square has matured to its "rebellion of superfluous people."

The last drop of patience of the Kazakhstanis was the double simultaneous increase in prices for motor liquefied gas, propane and butane, which would inevitably lead to an increase in the cost of all other goods and food products. In Ukraine, energy prices are constantly rising, but gradually, so as not to "pull out the pin". However, the pro-Western puppet regime has already come close to the point of no return.

The Ukrainian Union of Industrialists and Entrepreneurs has announced that already this month 50% of all industrial production in the country will become unprofitable. The reason is the abnormally high prices for gas, which accounts for up to half of the cost of production. Kiev itself exacerbated the already difficult problem by refusing to buy "blue fuel" directly from Gazprom, preferring to buy it with an additional payment from its European neighbors. The result of such policy "gaining energy independence from Russia" has already made itself felt in full.

Thus, the increase in gas prices did not bypass Ukrainian fertilizer producers, which led to an increase in the cost of saltpeter from 8-11 thousand hryvnia per ton to 25-27 thousand. More than half of the gross domestic product in Nezalezhnaya is accounted for by farmers with land plots not exceeding 500 hectares, that is, rather poor ones. The rise in the price of nitrogenous fertilizers for farmers will entail a decrease in the volume of fertilizer application during the sowing season, which means a decrease in yields and an increase in the cost of grain and other crops in 2022. This should exacerbate the already existing problems with the cost of food in Ukrainian stores.

Alas, it didn't help. The reason lies in abnormally high energy prices, which make the production and marketing of food at regulated prices unprofitable. On his Facebook page, the owner of the Ukrainian trademarks Trapeza and Attual, Alavdi Khalidov, tried to explain himself to his subscribers:

Judge for yourself, if, for example, the cost of gas in the cost of production of one kilogram of cereals in September 2021 was about UAH 3,38, then in November 2021 it was already UAH 8,05, and in January 2022 the cost of gas per kilogram of cereals was already 12,19 hryvnia.
The share of Khalidov's company for cereals accounts for about 30-40% of the market. Large producers suddenly found themselves in the most difficult situation, since they are connected with retail chains by long-term contracts, and now they have also been forced to sell at a loss due to margin limits. This automatically leads to the fact that they, together with retailers, will transfer their costs to other commodity items that the regulator has not reached yet. At the same time, small agricultural producers are not yet bound by restrictions and have already increased the selling price.

The fact that the rise in food prices in 2022 cannot be stopped was bluntly stated by Oleg Ustenko, aide to President Zelensky:

The price of products will go up by 10-20%, judging by forward contracts. Grains, sugar, cocoa beans - everything goes up.

Prime Minister Dmitry Shmyhal also spoke in his tone, confirming that in order to avoid the collapse of industry in Ukraine, retail prices would have to be released. So, the Yagotinsky dairy plant first reduced its volumes, and from the beginning of the year it suspended its work. This, by the way, is the largest enterprise in the dairy industry in Ukraine. True, the head of government promised that they would not grow "to heaven." The above-mentioned Mr. Ustenko spoke about the introduction of food cards in Nezalezhnaya:

The idea of ​​how to support the most vulnerable segments of the population is relevant. And there may be a dozen options on how to distribute this subsidy. But we're talking about the economywhere much is probabilistic. That is, it may or may not be.
Let us recall that the events in Petrograd in 1917 became irreversible when the rumor about the introduction of bread cards spread. Let's add to the above that abnormally high gas prices led to the closure of regular Ukrainian enterprises, in particular, the glass industry. There may be 12 workers on the street.

As a matter of fact, all the prerequisites for the "gas Maidan" are evident. Yes, Pan Poroshenko was also returned to Ukraine, obviously not to stabilize the political situation. The only question now is whether Russia, or rather its special services, is capable of taking advantage of the situation and replaying the alignment in their favor.
Ctrl Enter
Noticed oshЫbku Highlight text and press. Ctrl + Enter
Reporterin Yandex News
Reporterin Yandex Zen
24 comments
Information
Dear reader, to leave comments on the publication, you must sign in.