Kazakhstan may have a real "Maidan" 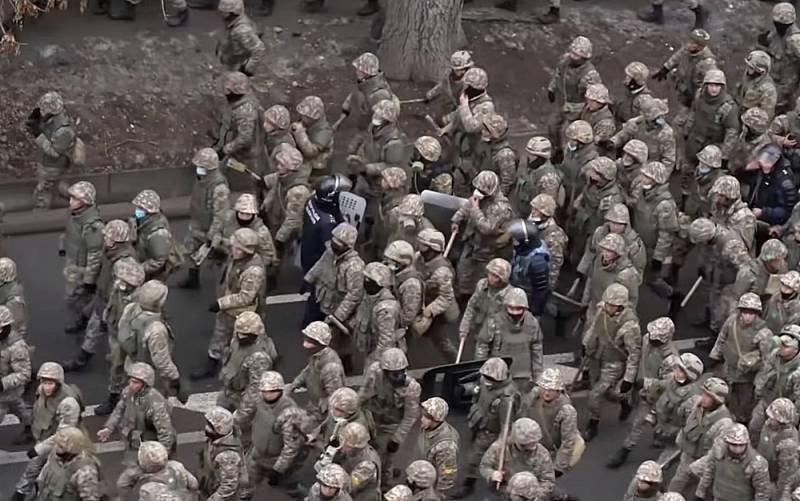 Today, when the main dramatic events in Kazakhstan are already over, passions have subsided, and the CSTO military contingent is getting ready to leave, we can try to sum up some intermediate results of what happened in early 2022 in this country. By analogy with Ukraine in 2014, we hastened to call the “mambet revolt” the Kazakh Maidan and reduce everything to the intrigues of the West. However, parallels here should be drawn, rather, with Ukraine of the 2004-2005 model and its “Orange Revolution”. Alas, the real Maidan in this Central Asian republic is yet to come.

Despite the outward resemblance to the tragic events of 2014 in Ukraine, something different happened in Kazakhstan at the beginning of 2022. Attempts to lead mass protests and riots, either from Kiev or from France, cannot be called otherwise than “funny”. Not even 20 armed militants were found. If they really were in such numbers, Kazakhstan would have drowned in blood, and Russia would have had to transfer not 3000 peacekeepers, but entire army corps to help and conduct full-scale military operations, while demolishing entire cities with Islamist terrorists entrenched there with aircraft and artillery. No local Kazakh security forces, with all due respect to them, would definitely have coped with such a task in a few days. Attention is drawn to the information about militants allegedly dressed in military and law enforcement uniforms. The reaction of the collective West, which was perplexed and wary, watched what was happening in Kazakhstan, where many billions of dollars of foreign investments were invested, is also indicative.

All this can be explained only by the fact that it was a spontaneous riot caused by inadequate actions of local authorities, which sharply increased the price of motor fuel. This was the last straw in the cup of patience. But she, the cup, has been filled for a very long time, all 30 years since the collapse of the USSR.

After Kazakhstan gained independence and democracy, as well as the privatization of state property, the gradual de-industrialization and the construction of a mono-economy, which were necessarily attached to them, an “atomic bomb”, as it is now fashionable to say, was laid under this state. Society, already divided into zhuzes, tribes and clans, was also sharply divided along socio-economic lines. Kazakhstan was quite lucky with rich deposits of oil, gas, uranium and other ores, which allowed it to live for a long time at the expense of natural rent from the export of raw materials abroad. The luckiest of all were those who managed to participate in the privatization process, the oil, gas, metallurgists, as well as those who joined this newly-minted elite as "service personnel". The rest were less fortunate.

Most of the population of Kazakhstan, one might say, returned from the country of the Soviets in the Middle Ages. People live on the periphery either in untidy auls or even in yurts heated by dung. They have the appropriate level of education and culture. In principle, they have no chance to break through to the top, the so-called social elevators, plus everything is complicated by the peculiarities of the tribal system. This is the environment in which countless notorious "mambets" or "superfluous people" appear, who fiercely hate the "urban", who earn good money, drive expensive foreign cars, relax in foreign resorts, etc. The highest concentration of "mambets" is observed in Western Kazakhstan, where young people have no prospects at all.

And on New Year's Eve they get a "gift": they double the price of motor fuel, which will automatically lead to an increase in the cost of all other goods. And so, “under the Christmas tree” and “under the vodka”, people take to the streets en masse, and then collectively go to large cities in order to “beat the townspeople”. Protests began in Western Kazakhstan and quickly moved to the largest metropolis and the former capital of the country, Alma-Ata. Looting, violence against women, looting, brutality against law enforcement officers - these are all manifestations of the "mution of mambets." It is possible that the "militants" allegedly dressed in military uniforms were actually servicemen, people from the same periphery who joined the "rebellious mob".

Were there Islamist terrorists? It is possible that they were, but obviously not 20 thousand. Was there control from the West? It is possible that there really was an attempt by political emigrants to take control of the situation, but it was not planned, and therefore turned out to be unconvincing. At the same time, a real apex coup took place unequivocally "on the sly", when the clan of President Tokayev finally pushed the clan of ex-president Nazarbayev away from the levers of power.

The foregoing gives us reason to compare Kazakhstan at the beginning of 2022 with Ukraine of the sample not of 2014, but rather of 2004. Millionaires defeated billionaires. Again. But what will happen next?

On the way to the real Maidan

And then the real prospect of a real anti-Russian coup d'état looms before Kazakhstan, and here's why.

At first, the problem of "extra people" has not gone away. No one will be engaged in organizing their life under the conditions of the feudal-oligarchic regime in Kazakhstan. It's just not possible. But people's hatred of the authorities must be channeled somewhere, and it is already clear where.

Everything in Russia revolted the appointment of Askar Umarov, a Russophobe and Pan-Turkist, to the post of Minister of Information and Social Development. How can we help you? But everything is natural. Now, on behalf of President Tokayev, this person will mold Russia into an image of an external enemy, an interventionist and an occupier who does not allow the proud heirs of the Golden Horde to live happily ever after. You will not envy the local ethnic Russians and Russified Kazakhs in Northern Kazakhstan. Probably, it's time to seriously think about an alternate airfield in Russia.

Secondly, about the re-entry of the CSTO troops into Kazakhstan, in which case you can forget. Now, in opposition to Russia, President Tokayev will increase rapprochement with Turkey within the framework of the “Great Turan” and will probably take real steps towards the emergence of his united Turkic-speaking army. In the future, instead of the CSTO, Nur-Sultan will rather turn to the Organization of Turkic States for help, and therefore, instead of Russian peacekeepers, in the event of a new “Mambet riot”, Turkish and Azerbaijani ones will come.

It is unlikely that President Tokayev will want to completely “lie down” under Ankara, but he has become very reminiscent of his former colleague Yanukovych. He also considered himself very smart and the most cunning. In the very foreseeable future, in about 5-10 years, they will want to change the moderately Russophobic regime in Nur-Sultan to a sharply Russophobic one in order to complete the creation of the “Great Turan”. And then all these “mambets”, whom Tokayev decided to incite against Russia and Kazakh Russians, will first demolish him himself, and then, under the strict guidance of Turkish military experts, they will take on Northern Kazakhstan.

This will be a real Maidan according to the Ukrainian model of 2014, with all the consequences, such as the “Donbass scenario” and the transformation of a huge neighboring state with a colossal unprotected border into a hostile one. Can this be avoided?

Probably not anymore, judging by the commentary of the press secretary of the President of the Russian Federation Dmitry Peskov regarding the appointment of the clinical Russophobe Askar Umarov as the Minister of Information and Social Development:

Indeed, there were awkward statements, incorrect statements, but here, first of all, one should proceed from the fact that it was the President of Kazakhstan, the President of our partner, allied state, who appointed his cabinet of ministers, and he showed confidence in Mr. Umarov. It should be judged by the statements that Umarov will already make in his new status, and, of course, it is necessary and will have to work to interact and deepen cooperation with those ministers appointed by President Tokayev.
Well, yes, this is a purely “internal Kazakhstan affair”. Their life there, in the Kremlin, does not teach them anything.
Ctrl Enter
Noticed oshЫbku Highlight text and press. Ctrl + Enter
We are
"We must beat first": the geopolitical alignment around Russia is continuously deteriorating
Ten "defeats" of Putin
Reporterin Yandex News
Read Reporterin Google News
25 comments
Information
Dear reader, to leave comments on the publication, you must sign in.