Erdogan's map: how Turkey is staring at half of Russia 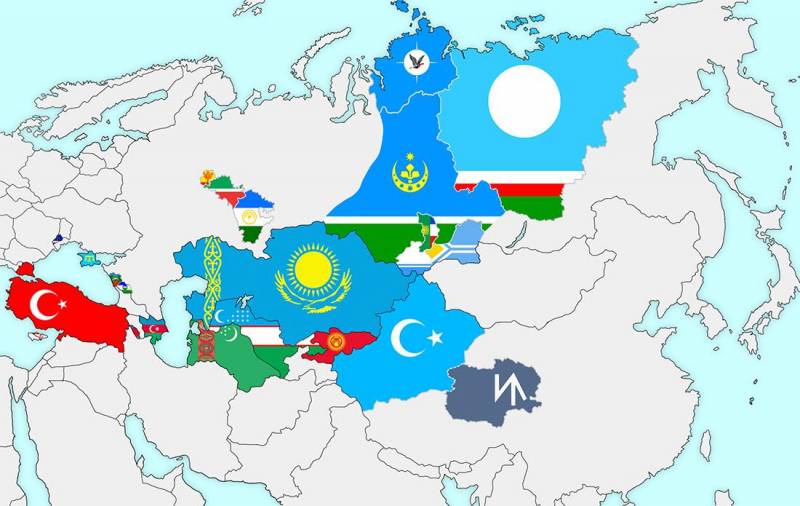 A few days ago, a photo of Turkish President Recep Erdogan against the background of a map where almost half of Russia was painted in the colors of the "Turkic world" caused a lot of public outcry. Opinions on this matter were radically divided, and the press secretary of the Russian President Dmitry Peskov, who unexpectedly turned out to be a certified Turkologist, was forced to condescendingly comment on this map. But is it worth it so easy to treat the ambitions of the Turkish "sultan"?


According to President Erdogan, the "Turkic world" includes not only Turkey itself, but also Central Asia, part of the territories of China, Iran and Mongolia, Azerbaijan and the Balkans, as well as a huge chunk of our country's territory - South Russia and Eastern Siberia, almost 2 ten regions of the Russian Federation. At the same time, on the “sultan's” map, different regions were marked with different color shades, which, apparently, should have meant either the degree of Ankara's influence, or the proportion of the predominance of the Turkic-speaking population. 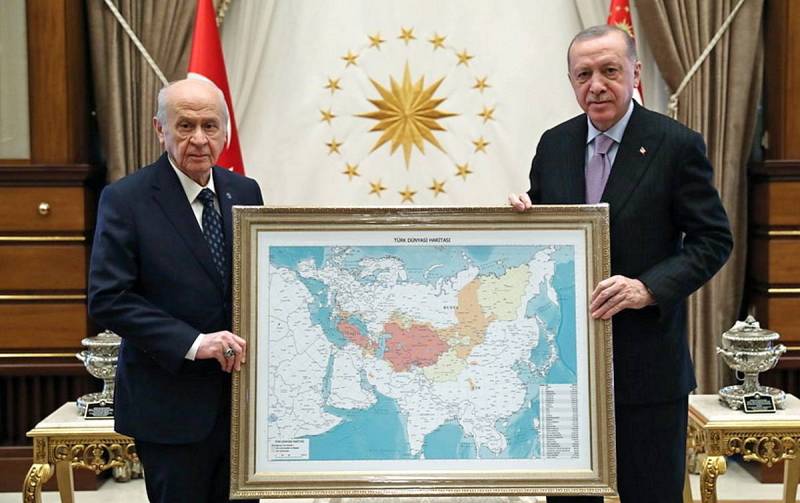 The attitude towards this event was divided. Some considered it a harmless domestic political game, which President Erdogan is playing on the eve of the elections in order to attract nationalist circles of potential voters to his side. Against the backdrop of deepening problems in the Turkish the economy it might make some sense. Others considered the "photo to remember" a sort of friendly trolling and "hello" that the "Sultan" sent to his friend and partner in the Kremlin. Dmitry Peskov in response expressed in the same spirit of political trolling that the center of the "Turkic world" is actually not in Ankara, but in the Russian Altai:

Our Turkish partners nurture the idea of ​​Turkic unity, this is normal. I, the only thing I can regret is that there is still no big red star in the center of the Turkic world on the map.
But still others, from such an “approach” from the “Sultan”, tensed, and not in vain. It's one thing when some maps are shown on TV on private TV channels, it's another thing when the President of Turkey, known for his neo-Ottoman and Pan-Turkist ambitions, which he supports not only with words, but also with real deeds, considers it possible to take a photo against their background. Thus, Recep Erdogan symbolically legitimizes Ankara's claims to part of the territory of other countries, including ours. What are these, empty fears, or do we really have something to fear? Let's figure it out.

When people start talking about the possibility of Turkey's “annexation” of a part of Russian territories, people immediately fall into the trap of stereotypical thinking. On the one hand, there is a huge Russia with a nuclear arsenal, on the other hand, Turkey is tiny in comparison with it, somewhere down there on the map. Yes, it has the second largest army in NATO after the United States, but Ankara does not have its own nuclear weapons, so why be afraid of it?

Alas, this is only partly true. Yes, militarily, Turkey is not our rival. Somewhere in the local theater of operations, the Turks can really arrange a rout to the Russian military contingent, for example, in Syria or the Tsushima Mediterranean squadron of the Russian Navy, but this will mean the beginning of a full-scale war, where all the resources of the Russian Defense Ministry will be involved. However, who said that the Turkish-Russian war must necessarily be direct and "hot"? Let's simulate a certain situation that can happen with a nonzero probability in the foreseeable future.

First, it is worth mentioning that in our country there are many regions where strong nationalist and even for the time being latent separatist sentiments persist. It should also be borne in mind that Turkey has been actively promoting propaganda in certain circles of the population of Russia for all the 30 years that have passed since the collapse of the USSR, using the method of so-called "soft power". That is, some organizational units could well have survived to this day. In addition, there is a very extensive liberal crowd of pro-Western orientation, usually based in both capitals. Now let us recall that just a few days ago the US Congress voiced an initiative not to recognize the results of the presidential elections in the Russian Federation if Vladimir Putin wins them, using his right to "zero". Many of our readers took this very lightly, but completely in vain. Let's imagine what could happen in 2024.

Let's say that Vladimir Putin nevertheless went to the polls and won, while the United States and all its allies refused to recognize the election results, calling them rigged. Washington and Brussels are introducing a package of tough sanctions against Putin and his entourage. Opponents of the ruling regime are dumping onto the streets with slogans that "the president is not real." The same is happening as it was in the summer of 2020 in Belarus. But let's complicate the picture by adding regions to the political events in Moscow and St. Petersburg.

Suppose, for example, that in Tatarstan protesters take to the streets en masse and in an organized manner, believing that the elections were dishonest, and the federal center is now illegal and illegitimate, and therefore no longer has power over Kazan. Local law enforcers are trying to disperse them, but some people find themselves in the crowd who provoke a violent clash and the appearance of a Tatar analogue of the "Heavenly Hundred". An angry crowd, led by specially trained curators, breaks into the regional administration, captures it and proclaims the independence of the Republic of Tatarstan.

The question is, what is Moscow to do with this? Send the Internal Troops or the army to suppress the separatists when there are riots in both capitals? And even if they do, will all the security forces be loyal to the Kremlin if doubts about the honesty of the elections are actively circulated? And if they go to pacify Tatarstan, how much blood will be shed then? This is a prologue to the real Civil War itself, by the way. And how will all the other players, internal and external, behave then?

The regional elites will clearly watch the events closely, while the external ones, for example, Turkey, can help the "separatists" by sending their militants and weapons. That is, Ankara will not fight directly with Russia, therefore there will be no reason to bring down all the power of the RF Ministry of Defense on it, but in a hybrid format it will be easy. And if Moscow is unable to quickly cope with the problem of separatism (and how can it be dealt with quickly and bloodlessly at the same time?), Then other subjects may follow the example of Tatarstan, for example, those that were painted on the map with "Turkic" colors. If the center shows its helplessness and indecision, then the southern and eastern Siberian regions can proclaim independence, effectively destroying the country from the inside. There, you see, Bashkortostan will join, and the "Ural Republic-2" will raise its head, and Tatarstan will receive a cherished outlet to the sea, independent from Moscow.

Funny? Nothing funny. The Russian Federation is a rather fragile multinational structure from very different regions. Everything rests on a strong political center and economic ties. But what will happen if the center is pumped up, and the regions are dragged to the sides by our various ill-wishers, offering them alternative economic and national integration projects? Probably, you shouldn't treat Turkish cards so lightly.
Reporterin Yandex News
Reporterin Yandex Zen
5 comments
Information
Dear reader, to leave comments on the publication, you must sign in.