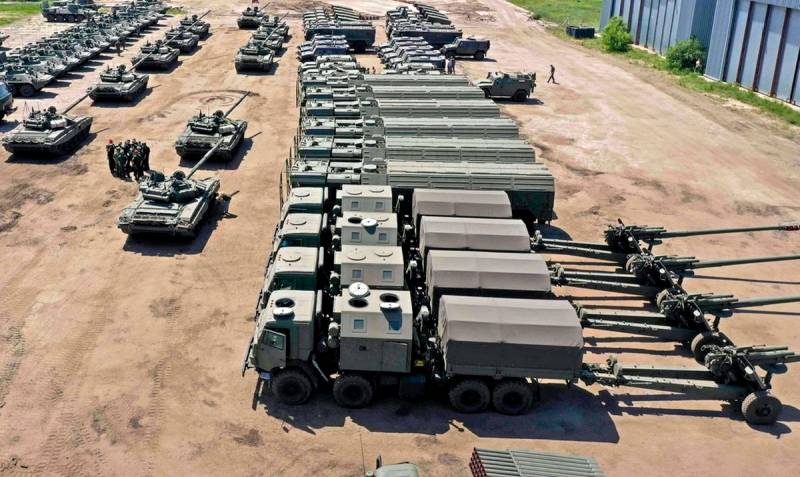 Over the past few weeks, there has been an active transfer of Russian troops and armored vehicles to the Ukrainian border. This is done emphatically demonstratively in the daytime without the slightest attempt to hide. It would be naive not to notice the relationship with the build-up of the Ukrainian military grouping in Donbass, aimed at the DPR and LPR, which Moscow has promised not to abandon. But will Russian soldiers officially step into the territory of a neighboring country, and if so, how far can they go?


For understanding and adequate forecasting, it is necessary to try to understand the motivation of all parties to this conflict.

What does Donbass need? To be finally left alone. What does Ukraine need? The maximum program consists in the forceful return of the DPR and LPR according to the “Karabakh scenario”. The minimum program allows the return of at least part of their territory, several settlements, which in Kiev will be proclaimed as a "great victory" and "a brilliant victory of Ukrainian weapons over Muscovites."

What does Russia need? To maintain the status quo, when the DPR and LPR are not moving either here or there, covering Crimea, and manage to complete the construction of Nord Stream 2 in order to be able to get off the “needle” of the Ukrainian gas transit. What does the West need? The West, or rather, in this matter, the United States, which is behind Ukraine, needs to bring the war in Donbass to such a level of ferocity and losses in order to force the Kremlin to directly send Russian troops to hold the DPR and LPR. This is necessary in order to introduce another package of tough sanctions against Russia, up to and including crippling, to close or take full control of the Nord Stream 2 gas pipeline, which we have already discussed. told earlier.

Now let's see what the parties to the conflict are ready to do to achieve their goals. Over the past seven years, Kiev has carried out the reform of the Armed Forces of Ukraine, multiplying their number, increased the level of organization and controllability. At present, two large shock fists are aimed at Donetsk and Luhansk. According to the Commander-in-Chief of the Armed Forces of Ukraine Ruslan Khomchak, the DPR and LPR today have a total of 28 thousand armed defenders. Let's face it, the forces are unequal, Kiev has an advantage, and the two unrecognized republics will definitely not survive on their own. In the event of a large-scale offensive by the Ukrainian army, they will need Russian help. And you can't get off with the so-called "north wind" and "military trade" alone.

The problem is that it is precisely this scenario that the Kremlin clearly would like to avoid in order not to fall into the American trap. The Russian leadership is obviously trying to "shake" Kiev, demonstrating its readiness, if necessary, to stop the offensive of the Armed Forces of Ukraine, or even to launch a counteroffensive. For this, our troops are being pulled together to the border with Ukraine in the Rostov, Bryansk and Voronezh regions. In the southern direction along the Crimean bridge are columns with armored vehicles. For the needs of the Ministry of Defense of the Russian Federation, all railway platforms in the vicinity were seized in order to transport tanks and self-propelled artillery installations on them. This movement is explained by the usual large-scale exercises, which, as a rule, take place twice a year, in spring and autumn. However, in recent years, sudden checks of the combat readiness of the RF Armed Forces, when entire districts were raised, became the norm.

According to the aforementioned head of the Ukrainian General Staff Khomchak, Russia has concentrated 28 battalion tactical groups on the border. Is it a lot or a little? How to say. It is definitely not enough to reach Kiev, Odessa or Lviv. If we add up these forces with those that Donetsk and Lugansk have, in Donbass we get an approximate parity with the Armed Forces of Ukraine. That is, neither side will have a decisive advantage for convincingly defeating the enemy. Russian troops are a kind of "reserve" of the DPR and LPR, which should become a guarantor against defeat by Ukraine. Moreover, this is a military reserve, which the Kremlin, for political reasons, with which we started, would clearly prefer not to use, but to limit itself to imitation of determination.

Another problem follows from this alignment. Another side of the conflict, the United States, does not care at all how many Ukrainians and Russians will die there. It is important for Washington to force Moscow to directly send its troops to Donbass. And this can only be done by a large-scale and bloody war of attrition, when the forces of both Ukraine and the DPR and LPR will burn out in a fiery furnace without counting. The Joe Biden administration can achieve this by sending the Armed Forces of increasingly modern and deadly types of weapons, the help of military advisers and intelligence data. A war of this type can last not six weeks, as in Nagorno-Karabakh, but, for example, six months of continuous fierce fighting.

If Washington decides to provoke the Kremlin into direct entry of Russian troops, it will support the armed conflict to the last Ukrainian.
Reporterin Yandex News
Reporterin Yandex Zen
25 comments
Information
Dear reader, to leave comments on the publication, you must sign in.