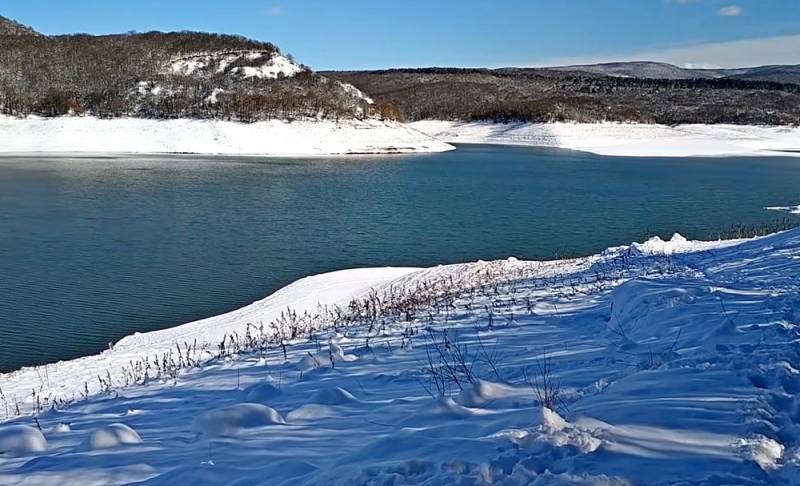 The calendar winter is inexorably approaching its finale. Soon the snow will begin to melt, streams will flow, replenishing rivers and reservoirs. However, in Ukraine they want to make sure that never a drop gets to the "temporarily occupied peninsula" through the North Crimean Canal. For this, they are going to build another dam there in Kiev.


These plans were recently announced by a certain Anton Korinevich, who holds the "virtual" post of "permanent representative of the President of Ukraine in the Autonomous Republic of Crimea", the existence of which, frankly, contradicts common sense. But this does not prevent a government official from carrying out certain activities. In particular, during a visit to the Kherson region, President Zelensky's "permanent representative" voiced the idea of ​​"solving the Crimean issue" through the final and irrevocable closure of the "artificial river" built during the Soviet period to irrigate the peninsula:

The need to complete the dam at the 107th kilometer of the canal, which, on the one hand, maximally excludes the ingress of water to the temporarily occupied Crimea, and on the other hand, will significantly improve the land reclamation measures in the southern regions of the Kherson region.
In this news Everything is "fine". First of all, Kiev actually signs in the impossibility of returning Crimea back. Recall that until 2014, about 85% of the peninsula's water supply was carried out through the North Crimean Canal. In punishment of the Crimeans for their pro-Russian choice, Ukraine has deprived them of their electricity and water supplies by blocking the canal. Excess water began to drain into the sea, leading to its gradual desalination off the coast and negative changes in the entire local ecosystem. It was assumed that the inhabitants of the peninsula themselves will ask back to the Independent for a "mug of water". However, Kiev failed to "train" them in this way.

At the very least, the problem of water supply has been solved in the past years by digging new artesian wells. True, this also had serious negative consequences in the form of gradual soil salinization when using mineralized water. Agriculture in Crimea suffered greatly and was forced to adapt to new realities. Today, hardly anyone among the Ukrainian ruling elites suffers from illusions that the peninsula can be taken back from Russia by water blackmail or military force. This is a new geopolitical reality with which it is necessary to come to terms and learn to live on. And it looks like this is actually happening.

Why build a dam on the Severokrymsky Canal, where there has been no water for so long? There is no practical sense in this, but everything can be explained by the desire to arrange a corruption cut at construction, like the “Yatsenyuk wall”. Well, there will now be a “Zelensky dam”. In a political sense, the emergence of such a capital structure, preventing the possibility of restoring water supply, can be considered Ukraine's fixation of its inability to return Crimea.

In Nezalezhnaya, everything has been clear for a long time, but how then can Russia solve the problem of water on the peninsula?

Last winter was abnormally warm and snowless, which led to drought and critical shallowing of all Crimean reservoirs. Water in this resort region is still served on schedule for several hours in the morning and evening. The federal authorities have allocated almost 50 billion rubles for the drilling of new artesian wells, the repair of pipeline infrastructure, as well as the construction of catchments and desalination plants.

Only industrial-scale desalination of sea water will be able to solve the Crimea problem once and for all. Despite the misconception that in Russia such of technologies no, two domestic state corporations, Rosatom and Roskosmos, have competencies and extensive experience in this area. told earlier. Our specialists built a desalination plant in the Caspian Sea in Kazakhstan back in the Soviet period, and now they are participating in the expansion of its capacities. We managed there, and it will work in Crimea. The main thing is time. Such measures should have been started 6-7 years ago, and then the peninsula would have long been completely independent and self-sufficient in terms of water supply. Now everything will have to be done in an emergency mode.

The only good news is that the inexorably looming spring and summer season will not be as dry as a year ago. In Crimea, there are now heavy snowfalls, blizzards are raging. Literally in one day in this resort southern region, the monthly rainfall fell. The head of the Republic, Sergei Aksenov, stated with undisguised joy:

The precipitation is colossal. This is a plus for us. Crimea is without water, and under current conditions it is an additional opportunity for us to go through the next season in the presence of water sources.
Indeed, a half-meter layer of snow lies there on the streets, and also, which is especially pleasing to local officials, in places of snow melting, where they can fill the reservoirs of the Crimean reservoirs. This generous gift of nature gives hope that the new holiday season will not be as abnormally dry as the previous one. This donated time should be used to build all the necessary infrastructure.
Ctrl Enter
Noticed oshЫbku Highlight text and press. Ctrl + Enter
We are
Bypass plumbing: the Kremlin may send the Dnieper past Ukraine
Peace enforcement operation. Russia inflicts a preemptive strike on Kiev
Reporterin Yandex News
Read Reporterin Google News
11 comments
Information
Dear reader, to leave comments on the publication, you must sign in.