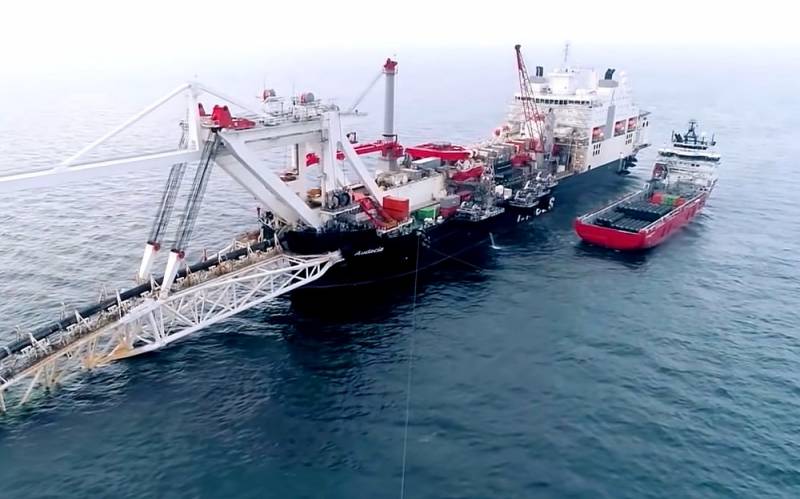 Political changes in Washington also entail a significant change economic US approaches. In particular, a light dawned at the end of the tunnel in front of the problematic Russian-German gas pipeline "Nord Stream-2". More and more authoritative sources in the Western press are talking about a compromise between the American and European elites. However, what looms in the future for Gazprom and Russia can hardly be called “beautiful far away”.


Psychologists identify five stages of accepting the inevitable. First comes the anger that falls on the one who says unpleasant things. It is followed by denial in the spirit of "it just can't be." Then comes the stage of bargaining, when there is hope for some kind of compromise in the "multi-move" style. It all ends with depression from the realization that it is impossible to really influence something and acceptance. As for those voiced in the recent ARTICLES prospects for the Nord Stream 2 gas pipeline, then the domestic audience mainly demonstrates anger and denial. Believe me, this is not such a mockery, but just a call to be more adequate.

So, what do we have at the moment. Nord Stream 2 was built bypassing Ukraine at the same time as Turkish Stream in order to end Russia's dependence on Kiev for gas supplies to Europe once and for all. She, addiction, has already become the cause of two "gas wars", and at the end of 2019 the third almost began. But it didn't happen. Gazprom signed, as it seemed to its leadership, the last transit contract for 5 years with Naftogaz on conditions that were very unfavorable for our country. Obviously, at the same time, it was planned to launch Nord Stream 2021 in the first quarter of 2, and to start pumping gas to the European market through it, bypassing the Ukrainian GTS.

Alas, this whole simple plan just fell apart in the end. The leadership of the domestic monopolist for some reason naively decided that it would be able to play on an equal footing with the United States on their field in Europe, without having any real levers of pressure, except for an argument about Germany's need for its inexpensive gas. As a result, Washington first succeeded in extending the norms of the EU's Third Energy Package regarding Nord Stream 2, leaving one of its two pipes empty. Then President Donald Trump imposed sanctions, forcing the Swiss contractor to give up construction in progress. Since then, the gas pipeline has remained at the bottom of the Baltic. Gazprom is still unable to complete it on its own due to the new package of US sanctions. The project is being abandoned by all new European companies.

What conclusion can be drawn from this? As unpleasant as this may sound, the United States has clearly demonstrated that without their consent, Nord Stream 2 will not be able to take place and continue to work normally. What's next?

And then the most interesting thing. In the United States, the ruling team has changed, and now not only the respected German Wirtschaftswoche, but also the American Wall Street Journal, as well as the British Financial Times, write about the possibility of a certain compromise between Washington and Berlin. But the possible conditions for this compromise are unlikely to please Russia. One realistic compromise might look like this.

Gazprom is allowed to complete the construction of Nord Stream-2 and launch one of its two pipes within the framework of the Third Energy Package. Also, only one line of the first Nord Stream will be loaded at full capacity. At the same time, Russia assumes obligations to preserve Ukrainian transit after the expiration of a 5-year contract, guaranteed to pay at least 40 billion cubic meters per year. If necessary, Gazprom will be able to launch all volumes from above on bypass routes, since they go through Nezalezhnaya at higher tariffs.

What do the parties get? Europe maintains Ukrainian UGS facilities, which are needed for a smooth passage of peak consumption during abnormally cold winter seasons, and several pipeline systems at once to diversify supplies from Russia. These are the brand new Turkish and Nord Stream 2, as well as the dilapidated Ukrainian GTS, which will have to be repaired at the expense of transit tariffs, which Kiev will assign to Gazprom. Our "national property" will become the owner of overwhelming gas transmission capacities, since new volumes of "blue fuel" in that direction have nowhere to come from, they will have to be maintained at our own expense. At the same time, it will not be possible to simply take and abandon the Ukrainian GTS, or even then "attack Ukraine", as our supporters of any "cunning plans" sometimes naively reasoned.

The United States and the European Union are preparing some kind of legal mechanism that will be put into effect in such scenarios, and then the work of Nord Stream 2 will stop. Europe itself will not freeze either, since it has drawn certain conclusions after two "gas wars". A network of LNG receiving terminals has been built along the entire coastline, and a gas transportation infrastructure has been created between EU members. By the way, the expansion of the presence of American LNG in the European market as a guarantee of "energy security" may become one of the conditions for the compromise we are discussing.

The latter is a response to the arguments that the United States allegedly cannot "rewind" its anti-Russian sanctions, since this requires the adoption of a new law. Washington knows how to lobby the interests of its national business abroad, so if necessary, both Democrats and Republicans will amicably pass the necessary law. The Europeans will likewise accept, if necessary, amendments to their legislation. A compromise with the United States in the above configuration, or close to it, is much more profitable for them than humbly bowing to the Americans or, on the contrary, splitting up with them over Nord Stream 2. Of course, it is not a fact that everything will go exactly as described, variations in one direction or another are possible, but the general vector of development seems to be quite realistic.

If everything goes like this, it will mean a complete collapse of the entire Kremlin foreign policy in the Ukrainian direction since 2014.
Ctrl Enter
Noticed oshЫbku Highlight text and press. Ctrl + Enter
We are
Peace enforcement operation. Russia inflicts a preemptive strike on Kiev
“The dark August night came the one whom the Ukrainians were waiting with horror”
Reporterin Yandex News
Read Reporterin Google News
12 comments
Information
Dear reader, to leave comments on the publication, you must sign in.